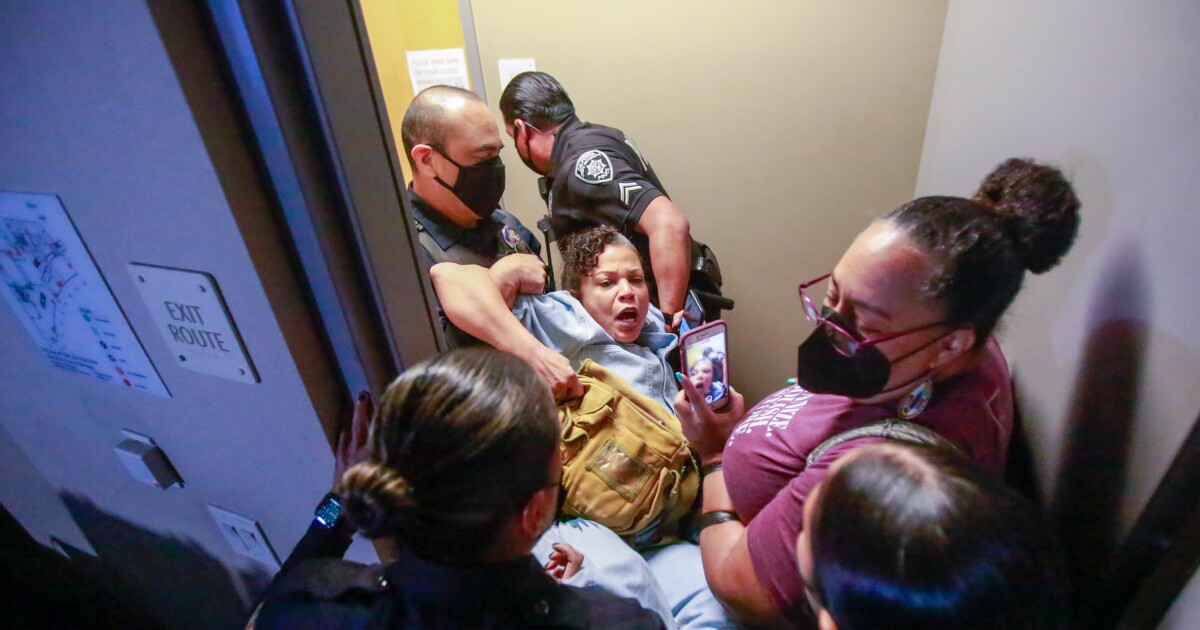 The Cal State Los Angeles Academic Senate overwhelmingly approved a no confidence resolution against university President William Covino following outcry over the forcible removal of a Black Lives Matter leader and Cal State L.A. professor during a mayoral debate more than one week ago.

Of those who participated, 40 senators, or 91%, voted in favor of the resolution, two voted against and two abstained. The vote — a symbolic stance that does not carry official repercussions on his job — did not total all eligible senators and did not include faculty and students outside of the senate.

“I’m committed to continue working with our more than 1,500 faculty members to advance student success, graduation rates and economic mobility,” Covino said in a statement. “Everyday our faculty and staff go above and beyond to fulfill the mission of our university. That deep commitment to our students and our community should not be overshadowed by, or mischaracterized because of, the incident last week.”

Campus police officers removed Melina Abdullah, a tenured professor and former chair of the school’s pan-African studies department, from a mayoral debate on May 1. Abdullah is heard in video footage identifying herself as a professor and shouting “You’re hurting me” as four campus police officers physically removed her from her seat at University-Student Union Theatre.

The incident was decried by elected officials, mayoral candidates and distressed faculty who have called for President William Covino to step down after failing to take responsibility for what transpired. Leda Ramos, a professor in the school’s Chicano studies department, said the event was “the straw that broke the camel’s back” following years of frustration with Covino’s leadership and what faculty have called a pattern of insensitive treatment towards marginalized communities.

Covino told representatives of the Academic Senate last week that he was not consulted prior to Abdullah’s removal and would not have approved it. He has authorized an independent investigation of the incident by an external investigator, a university spokesperson said, and has requested clarification of protocols and practices related to the role and scope of campus police and responsibilities.

Ramos also shared a letter during the meeting on behalf of civil rights leader Dolores Huerta, who called for accountability from Covino.

“Anti-blackness is indicative of your leadership and is no longer acceptable,” Huerta wrote. “The anti-blackness and violence to Cal State LA faculty and students must stop now.”

Protests over the exclusion of some candidates from the debate preceded the forum, where attendance was closely monitored.

The university’s initial statement said that Abdullah, who is Black, and her companion were not on the event’s guest list and when asked to leave, her friend did so but Abdullah ignored the requests.

“Professor Abdullah’s race and group affiliation were not factors in this incident,” the university had said.

But faculty have believed she was targeted for her race.

James Thomas, a professor of Pan-African studies, told The Times Tuesday that he took his class to the campus mayoral debate so they could learn how to organize such an event. The class is working on a civic engagement project with 16 branches of the NAACP and will hold a candidates’ forums next week for sheriffs and judges. Thomas didn’t have a ticket for his class and was prevented from attending the event. Outside, he saw Abdullah get dragged out of the building.

“I had to watch Dr. Abdullah be treated like an animal,” he said during the meeting.

The incident upset many.

“I am the Black Muslim faculty you speak about,” said Ameenah Bakeer Abdul-Jabaar, also a professor of Pan-African studies. “What happened to Dr. Abdullah — I don’t even understand what is going on. It’s like I’m in another world.”

Before the faculty senate meeting wrapped, Abdullah thanked faculty for their support.

“Today, I feel redeemed, I feel seen,” she said. “I feel very grateful that 91% of you say that Black people on our campus matter, that we’re going to move for justice and anti-racism, we’re going to build the kind of campus that our students, that are people, that our state, that our world deserves. That’s how I see this vote.”