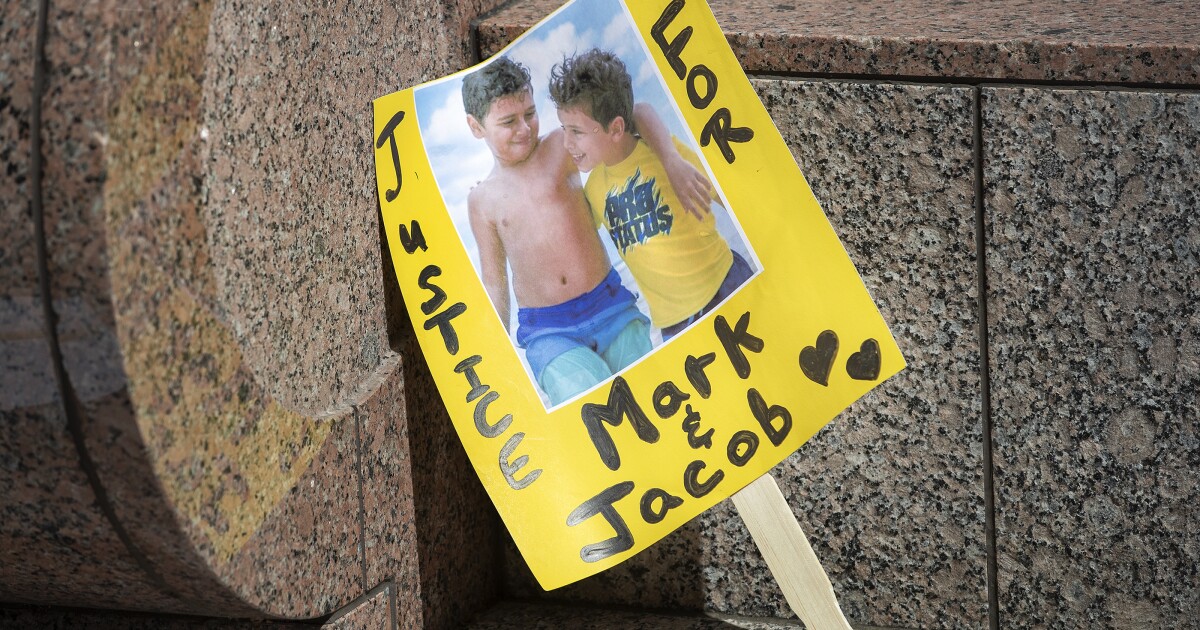 Two young boys were killed Sept. 29, 2020, by a speeding Mercedes on a quiet street. The driver was a Hidden Hills socialite.

Rebecca Grossman, the 58-year-old co-founder of the Grossman Burn Foundation with her husband, Dr. Peter Grossman, is charged with two counts of murder, two counts of vehicular manslaughter with gross negligence and one count of hit-and-run driving resulting in death in connection with the crash.

Grossman faces 34 years to life in prison if convicted. She has pleaded not guilty and is out on $2-million bail.

A judge will decide next week whether she should face a murder trial.

The children’s father, Karim Iskander, said in an interview with The Times that an “adult making adult decisions at the wheel of a vehicle [and] going at extreme speed” on a street where children and family are known to be walking needs to be “held accountable” for her actions.

“Justice needs to be done,” Iskander said, and Grossman needs to be convicted of all charges against her.

How did the boys’ mother describe what happened?

Nancy Iskander was crossing the street with her children when she heard the roar of engines. Two SUVs were barreling toward the crosswalk.

She put up her right hand in a desperate effort to stop the vehicles hurtling toward her family, grabbed her 5-year-old and dove to safety, she told a hushed Van Nuys courtroom Monday.

But the next time she saw her two older boys, they were near lifeless on Triunfo Canyon Road in Westlake Village, struck by Grossman’s speeding sport utility vehicle.

Iskander described Jacob lying near the curb, and down the road, her son Mark with his “arm broken” and “blood coming out his mouth. I see him every night.”

The boys were walking with their family at about 7:10 p.m. and crossing a three-way intersection with a marked crosswalk but no stoplight. Nancy Iskander testified that neither Grossman’s white Mercedes-Benz nor former Dodger Scott Erickson’s black SUV stopped and that Mark was carried a considerable distance down the road by Grossman’s car before she stopped.

She testified that her 5-year-old son, Zachary, watched paramedics perform CPR on his brother Jacob. Mark died at the scene, and Jacob would die hours later at the hospital.

Iskander said she was on rollerblades along with Jacob, Zachary was on his scooter and Mark was on his skateboard, crossing the residential boulevard. Her husband and daughter were jogging nearby when her life was torn apart so fast she cannot recall every frame, she said.

What did witnesses and experts say?

Grossman was tailing Erickson’s SUV and driving as fast as 81 mph on a Westlake Village road before she fatally hit the two young boys in the crosswalk, witnesses testified. After striking the children, sending one flying into the air, she braked for only a second but did not stop, according to testimony this week.

Yasamin Eftekhari described seeing the two SUVs in her car’s side mirror, passing at a high speed and then tapping their brakes immediately before the crosswalk. Grossman’s white Mercedes was unable to avoid the boys.

A crash expert also testified that had Grossman slowed from 73 mph — her speed about 550 feet from the crosswalk — to the posted limit of 45 mph, she would not have struck the children because they would have already been at the curb.

“If the car had been going the speed limit for five seconds, there would be no collision,” Michael Hale, a veteran collision investigator with the Orange County district attorney’s office, said.

He testified that data extracted from Grossman’s vehicle showed that she was flooring the gas pedal and had reached 81 mph about 1.5 seconds before the crash. He said the data showed she then lightly tapped the brakes for a second, reducing her speed to 73 mph, and took her foot off the gas before she struck the boys.

What about the aftermath of the crash?

By the time a Los Angeles County deputy came to administer a DUI test to Grossman after the crash, a Sheriff’s Department video shows her repeatedly asking him versions of the question: “What is going on with these children?”

She told the deputy that her husband, Dr. Peter Grossman, is a surgeon and could help, adding that her home is nearby.

“Can someone let me know how the children are? … The officer said some children were hit,” she said.

Kelly, who administered a DUI test, testified he determined that Grossman was “impaired.” When he first found her sitting in the back of a patrol SUV, he said, she had a weak smell of alcohol, but she was not slurring her words.

In the video, Grossman tells Kelly she had one drink hours ago at Julio’s restaurant, about 5 p.m. — a single margarita of normal size.

“It was dark. I came round the corner, my airbag deploys, and they are telling me children are involved,” she tells the deputy.

Los Angeles County Superior Court Judge Shellie Samuels said Grossman’s concern has no bearing on whether she committed the crimes: “I would expect any human being to be concerned about children.”

Two breathalyzer tests administered about 90 minutes after the crash showed the socialite’s blood-alcohol level was slightly below the legal limit for driving in California.

What are the legal issues?

To get a second-degree murder conviction, Deputy Dist. Atty. Ryan Gould must prove Grossman acted with implied malice and knew the act of driving over 70 mph in a residential area was dangerous to human life.

Usually, such cases are brought if the driver is under the influence and has a prior driving-under-the-influence conviction with subsequent DUI education classes. Grossman has two prior speeding tickets on a nearby freeway a decade ago and that same year on Kanan Road in Malibu.

What is Grossman’s defense?

Grossman’s lawyers have argued she never left the scene and stopped farther down the road from the scene of the crash.

They have repeatedly attempted to get Nancy Iskander to say that Erickson’s car trapped her two boys in a way that put them in front of Grossman’s Mercedes. After Erickson was charged with misdemeanor reckless driving in connection with the crash, the mother opposed his effort to have the charge diverted from the criminal justice system, saying in a letter that he was partly to blame for the deadly events.

2 dead, another possibly missing after truck plunges into ocean south of San Francisco