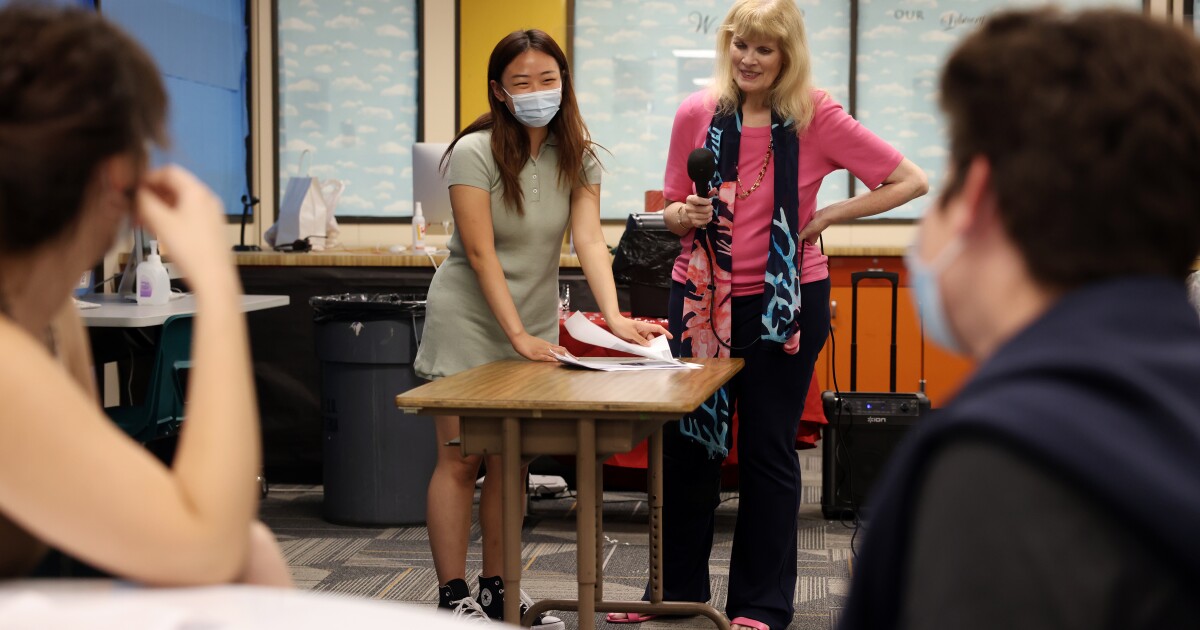 After months of suspense over their college acceptance decisions, the seniors at Downtown Magnets High School in Los Angeles were much in need of a cathartic event: a college rejection party.

Holding court in the library, clad in cheery pink, stood Lynda McGee, the school’s longtime college counselor who has helped thousands of students at her low-income, high-performing high school get into college. Only seniors with letters of denial could attend the rejection party — and they must ritually destroy the bad news in a shredder. The student with the most rejections would be honored with a paper crown and $50 bookstore gift card for having the gumption to try so many times. And everyone would get ice cream sundaes.

Then came wild cheers for the shredders.

Nick Saballos, the son of a Nicaraguan immigrant who works as a minimum-wage parking valet, was rejected by Stanford and Harvard, among others, but announced he is deciding between UC Berkeley and Bucknell University. Miguel Balbuena, whose single mother is a cashier at a fast-food restaurant, was waitlisted by four campuses but plans to attend Dartmouth. Eric Xie-McCarthy and Nathan Ortega were denied by Cornell and Stanford but said they were considering offers from UC Berkeley or UCLA.

“This is a celebration of the fact that you took a risk,” McGee told the four dozen in attendance. “You went for something that you weren’t sure would even work out and in some cases it did not. But you know what? You’re all going to college somewhere.”

The 237 seniors in Downtown Magnets’ class of 2022 are about to take a leap that will reshape their lives, their families — and California, which will rely on this new generation of diverse students to move the state forward. Like tens of thousands of other high school seniors, they pushed through two years of pandemic isolation to stay focused on their college dreams and survived a brutally competitive year, marked by record-shattering applications to the University of California.

Their roots are humble, but their GPAs are strong. Their college aspirations unfolded last fall when McGee boldly pushed them to claim a well-earned seat at universities they loved. Their parents are mostly immigrants from Latin America and Asia, many without college degrees who work as cooks and waitresses, parking valets and factory workers, caretakers and security guards.

Yet nearly all of Downtown Magnets’ seniors are accepted to college and most enroll. Despite UC’s surge in applications and lower admission rates last year, about 70% of the high school’s students who applied to a UC campus were admitted for fall 2021. That included 22 of 56 applicants to UC Berkeley — an admission rate nearly three times higher than the university’s overall admit rate of 14%.

The students navigated the U.S. college admissions process without the aid of high-priced consultants and tutors, most of them relying on the school’s teachers and counselors, who have created a campus climate that is both nurturing and academically rigorous.

On UC Berkeley decision day, they wanted to be together when they opened their admission notices in McGee’s college advising center.

Kenji Horigome went first. He is the son of a single mother who works in a low-wage job at a Koreatown restaurant. They came to Los Angeles from Japan when Kenji was in fourth grade after losing his father to illness. Kenji worked hard to learn English, overcome loneliness and earn good grades — achieving a 4.3 GPA — so he could earn college scholarships and grants so as not to burden his mother with loan debt.

On this day, Kenji hunched over his laptop and clicked on the notice. His eyes widened. “Oh shoot!” he exclaimed, leaping out of his chair. Berkeley accepted him — and offered enough financial aid to cover his attendance without loans.

He is also weighing offers from Harvey Mudd College and the University of Michigan, which have both offered him full-tuition scholarships, and Bowdoin College. Kenji dreams of a career in astrophysics, with a good salary so he can treat his mother to dinner at a fancy Korean restaurant and buy her a designer handbag.

“The money I earn will be a game changer to escape poverty,” Kenji said.

After months of suspense, a new generation of California’s star college applicants finally get their admission decisions.

“Whatever, Merced for the win anyways!” she said, referring to the Central Valley UC campus she is considering in hopes of eventually entering the new medical school being planned there.

Kristina also was denied at her top choice — Dartmouth — with her 3.8 GPA in the rigorous International Baccalaureate program. But McGee said she’s the kind of student who will succeed anywhere because of her work ethic, maturity and sense of responsibility. Kristina was also admitted to UC Riverside and is leaning there after a campus visit last week impressed her with the natural sciences facilities, undergraduate research opportunities, diverse demographics and first-year student support.

“There were low points, dealing with the rejection,” Kristina said. “I reached a point in the seven stages of grief where I was super sad. But I finally said, ‘It’s OK if you didn’t get in. Overall your experience is going to be positive.”

That was the message at the rejection party. “We worry about not being perfect,” said Principal Sarah Usmani. “Rejection means you tried. They’re going to have a great future.”

McGee said she lets her students mourn. “Then it’s, ‘OK, let’s look at the positives. Let’s find the right school. Let’s look at scholarship opportunities… My job is to make sure they don’t feel bitter or lost.”

This year’s admission season featured some head-scratching decisions. Zuyi Guan — whose parents immigrated from China and worked in low-wage restaurant jobs until starting their own eatery — achieved a 4.4 GPA. She developed leadership skills in Chinatown activism that helped her successfully apply for a $100,000 federal small business loan for her parents during the pandemic. She was admitted to UC Berkeley, UCLA, USC, Yale and Dartmouth, among others. But she was denied at UC Irvine.

She is leaning toward Yale, which is offering a no-loan financial aid package that will give her an Ivy League education for less than $2,700 annually.

“So for those of you who are like, ‘Wait. Yale took you and UCI didn’t?” McGee said after Zuyi shared her news. “That is college admission, folks: not predictable.”

“I know that emotionally, it’s a very challenging time for students and parents and families,” Leaman said. “But a denial should not be a definitive moment in somebody’s life. Students are going to find successful paths forward wherever they wind up.”

Many of the Downtown Magnets students are determined to prove those words true.

Kevin Hernandez had a bad sophomore year, when his grades plunged from all A’s in his first year to a D in Spanish and C in AP world history. He managed to rebound and achieve a 3.9 GPA but figured that wouldn’t get him into top universities. His worst moment in this year’s admission season came when he got rejection letters on the same day from UCLA, UC San Diego and UC Irvine. He dreaded telling his mother, an immigrant from Mexico who is a housekeeper and caretaker, and he questioned whether all of his hard work was worth it.

Then UC Santa Barbara offered him admission to its computer engineering program.

“I just needed at least one school to accept me, to see that I messed up one year but learned from my mistakes,” he said.

Aleyia Willis also saw her grades slip during the pandemic. She never believed her 2.9 GPA reflected her true academic abilities but lost her confidence to apply to a four-year university and planned to attend a community college. McGee urged her to apply to California State University, which requires a minimum 2.5 GPA. Aleyia will be attending Cal State Los Angeles to pursue a teaching career.

Emily Cruz struggled with remote learning at home, where her mother wanted her to help clean, cook and babysit, questioning why she was always on her laptop. She dropped out of the International Baccalaureate program, unable to juggle the competing pressures, and her GPA slid from a 3.5 to a 2.9, too low to qualify for UC.

But her maturity, resilience, school leadership skills and intellectual curiosity showed the kind of promise that Emily’s top choice, Brandeis University in Massachusetts, looks for in applicants to its transitional program, which offers intense academic support for underserved students. On Brandeis decision day, Emily came to the college center, nervously checking her phone every few minutes.

“Aaah, I got in!” Emily shrieked, her face lighting up as McGee rushed to hug her.

Kiana Portillo weathered an abrupt move from Honduras to Los Angeles as a fifth-grader. She was teased over her limited English, and dealt with her family’s financial hardships and an absent father. She was so nervous about her UC application that her younger sister came to her side and pressed the submit button with her. Kiana was accepted by UC Merced but denied by UCLA, UC Berkeley and UC Santa Barbara.

No matter. Kiana is headed to her top choice, Bucknell University in Pennsylvania, which has selected her as a Posse Foundation Scholar. The prestigious award program offers a full-tuition scholarship, leadership training, academic support and a network of fellow recipients.

The university’s rural setting and overwhelmingly white student body will be vastly different for Kiana but she takes that in stride. “I have to adapt, but that’s what the whole college process is like: to adapt.”

Back at the rejection party, McGee had one more ritual for her students before their ice cream treat. She directed them to stand, hold their plastic spoon aloft and repeat after her:

“I solemnly pledge to realize that my potential and promise is never determined by the college I attend,” they recited. “And ice cream heals all wounds.”