Caruso says he paid $1.6 million in income tax over 5 years 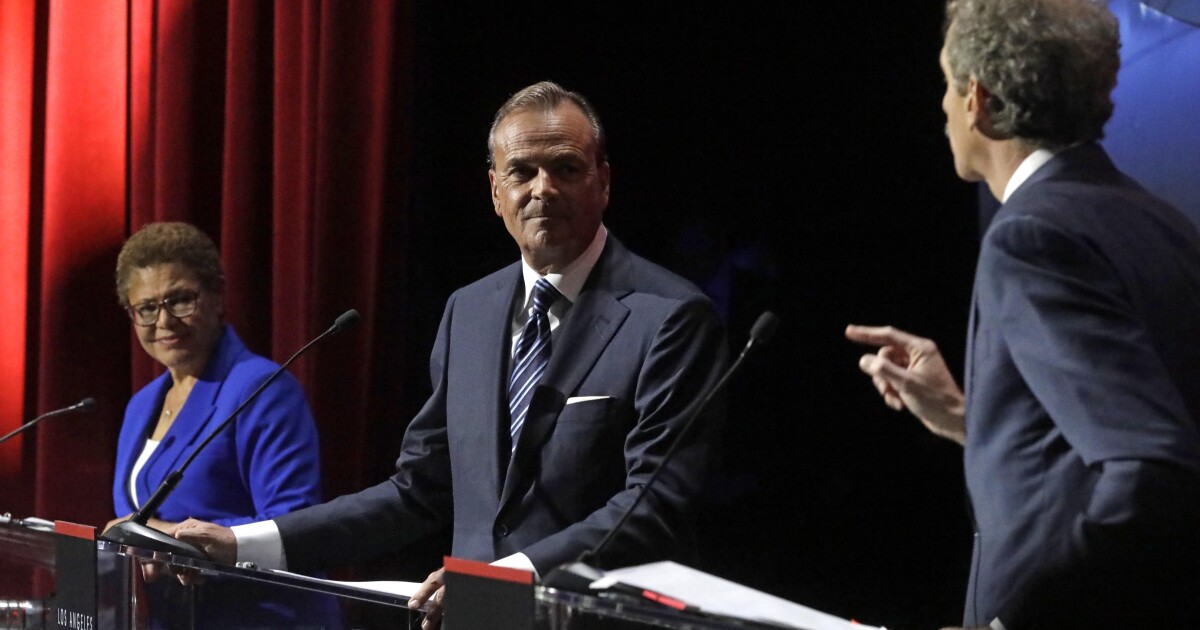 Rick Caruso has released information on the taxes that he and his businesses paid over the last five years but — unlike most other major candidates in the race for mayor — the billionaire businessman’s finances and tax rate remain a secret because of his unwillingness to release his full returns.

A letter from Caruso’s campaign reviewed by The Times says that the real estate developer paid more than $1.6 million in personal income taxes to the state and federal government over five years, or about $328,000 a year, on an undisclosed amount of income.

Caruso declared that he and his wife, Tina, made $39.6 million in charitable contributions. The report does not specify which organizations received the money, though in the past Caruso’s family foundation has reported large donations to programs supporting disadvantaged children, minority scholars and medical research at USC, where he served on the board of trustees.

The developer of the Grove, Americana at Brand and other shopping centers declined to release any information about his income, so it remains unclear what share of his money goes to the state and federal government.

He also said in the two-page tax report that he paid more than $2.3 million in business income taxes and stated that he paid taxes on his 216-foot yacht, Invictus. But the amount levied on the $100-million vessel, now for sale, also remains remains private.

The declarations from Caruso come a little more than three weeks after one of his rival’s for mayor, City Atty. Mike Feuer, challenged the businessman during a debate at USC to match Feuer by releasing five years of his tax returns. Debate moderator Elex Michaelson of Fox 11 News then challenged all five of the top candidates in the race to do the same.

Feuer was first to provide his tax forms, followed by U.S. Rep. Karen Bass (D-Los Angeles) and City Councilman Joe Buscaino. City Councilman Kevin de León initially balked at providing his tax information, but on Friday released part of his returns for two years and provided details on his 2021 return.

De León said through a spokesman that a recent move prevented him from providing five years of returns, but that he planned to release most of the information by Tuesday.

The complete returns of the other three elected officials were unremarkable — showing that each declared relatively modest income outside of their salaries, which were already public information.

In the weeks that he waited for Caruso to release tax information, Feuer criticized the businessman for “an aversion to transparency,” comparing the first-time candidate to Donald Trump, who also refused to release his tax returns, both before and after his 2016 election as president.

After Caruso produced the letter about his taxes, Feuer campaign strategist John Shallman released a statement saying: “Rick Caruso thinks voters can be conned. Compared to more than 100 pages of tax returns Mike Feuer released, Caruso puts out a sticky note that says ‘screw you’ to every voter in Los Angeles. Until he releases his full returns, voters will assume that Cayman Islands Caruso is a tax dodger who spends millions more on TV ads than he does on his taxes.”

Caruso’s yacht is registered in the Cayman Islands, a well-known tax haven.

“Rick Caruso has proudly paid hundreds of millions of dollars in taxes and created businesses that have employed thousands of people,” Caruso spokesman Peter Ragone said in a statement.

In slap about an investigation that has bedeviled the city attorney’s office, Ragone added, “The irony of politicians who practice transparency only when compelled by the FBI or investigations isn’t lost on anyone in LA. It’s these kind of political games that contribute to out of control homelessnesses, rising crime and rampant corruption.”

Caruso, whose net worth was estimated by Forbes at $4.3 billion, has flooded the internet and TV airwaves with ads in his campaign for mayor, far outspending his opponents. A poll this week showed him pulling into a dead heat with Bass, who had been the early frontrunner in the race.

In his brief report and an accompanying letter from an accountant, vouching for the “mathematical accuracy” of Caruso’s summary, the candidate laid out a more expansive view of the payments he and his businesses have made.

His businesses have paid $84.3 million in property taxes, on top of another $5 million in “property and other taxes on personal assets, the report says. The report said some of that $5 million was tied to his ownership of the yacht, without saying how much.

Also listed in the report is a figure of more than $5.4 million, paid by the Caruso Companies in miscellaneous charges, including the city’s business and parking taxes, the California Use Tax and federal excise taxes.

The report contends that businesses and tenants located at Caruso’s various retail centers have paid more than half a billion dollars in hotel, sales and food and beverage taxes.