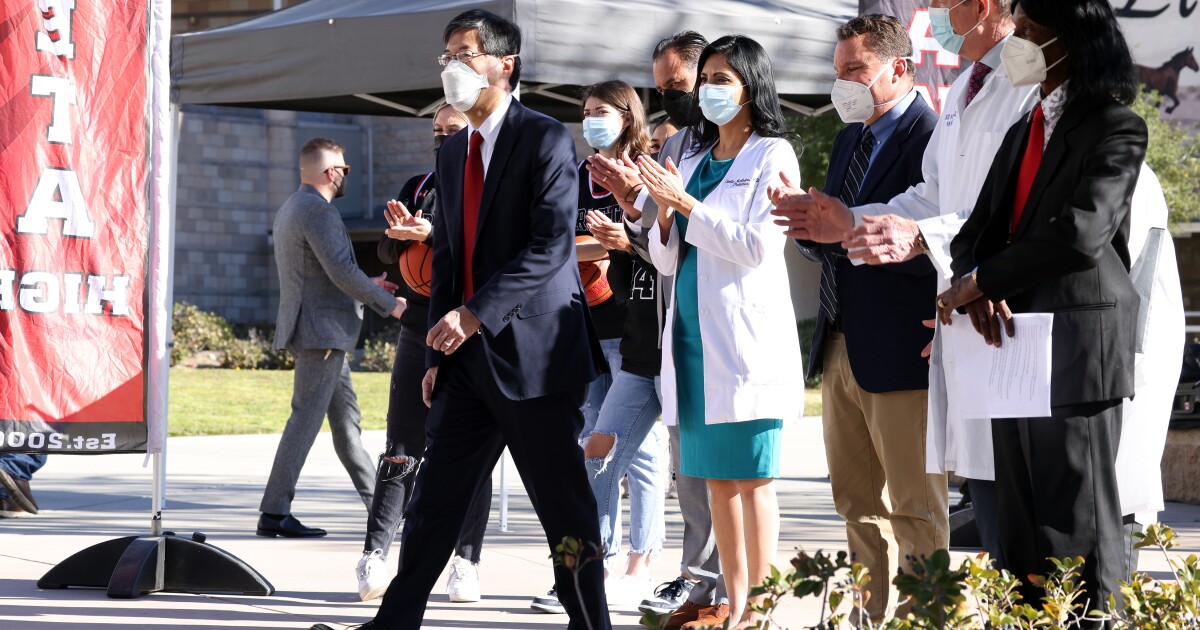 A bill requiring California students to be immunized for COVID-19 will not move forward, its author said Thursday, marking the second major piece of vaccination legislation to be pulled this year at the state Capitol before its first vote.

State Sen. Richard Pan (D-Sacramento) said he will pull from consideration Senate Bill 871, which would have added COVID-19 vaccines to California’s list of required inoculations for attending K-12 schools, prerequisites that can be skipped only if a student receives a rare medical exemption from a doctor.

Without the bill, the state will continue with a less strict COVID-19 vaccine mandate authorized last year by Gov. Gavin Newsom, allowing parents to opt their children out based on personal beliefs.

The Democratic lawmaker introduced SB 871 in January, saying it would ensure schools can stay open while offering backup to districts such as L.A. Unified that have struggled with their own mandates. The bill, however, faced familiar backlash from anti-vaccine activists and parents who said the state should not make medical decisions for their children.

“Until children’s access to COVID vaccination is greatly improved, I believe that a statewide policy to require COVID vaccination in schools is not the immediate priority, although it is an appropriate safety policy for many school districts in communities with good vaccine access,” Pan said.

Last month, Assemblymember Buffy Wicks (D-Oakland) said she would suspend action on Assembly Bill 1993, which would have required employees and independent contractors, in both public and private workplaces, to be vaccinated against COVID-19 as a condition of employment unless they have an exemption based on a medical condition, disability or religious beliefs. Wicks cited improved pandemic conditions and opposition from public safety unions.

The two bills were part of a larger package of legislation introduced by Democratic lawmakers who formed a vaccine working group earlier this year. The bills that remain active include Senate Bill 866 by state Sen. Scott Wiener (D-San Francisco), which would allow children 12 and up to be vaccinated without parental consent and Assembly Bill 1797 by Assemblymember Akilah Weber (D-San Diego), which would allow California school officials to more easily check student vaccine records by expanding access to a statewide immunization database.

Also moving forward is Assembly Bill 2098 by Assemblymember Evan Low (D-Campbell), which would make it easier for the Medical Board of California to discipline doctors who promote COVID-19 misinformation by classifying it as unprofessional conduct.

“I and my colleagues in the Vaccine Work Group will continue to advance policies to protect Californians from preventable COVID disease,” Pan said.

Without the bill, California still has plans to require students at all public and private schools to receive the COVID-19 vaccine. But that mandate, announced by Newsom in October, does not take effect until after the U.S. Food and Drug Administration fully approves the shot for children ages 12 and older. Currently, the Pfizer-BioNTech vaccine is fully approved for ages 16 and older, and there is only an emergency authorization in place for ages 5 to 15, which is a lesser standard than full approval.

Newsom’s mandate is limited to grades seven through 12 and allows parents to opt out because of personal beliefs. The state is required to offer broader personal belief exemptions for any newly required vaccine unless it is added through a new law to the list of shots students must receive to attend California schools.

Pan’s bill that was held back Thursday would have also changed future vaccine mandates for schoolchildren, limiting the instances in which personal belief exemptions would be allowed.

“Thanks to overwhelming opposition from California families, SB 871 has been defeated,” Kiley said in a statement. “This is a major victory for students and parents across California who made their voices heard.”