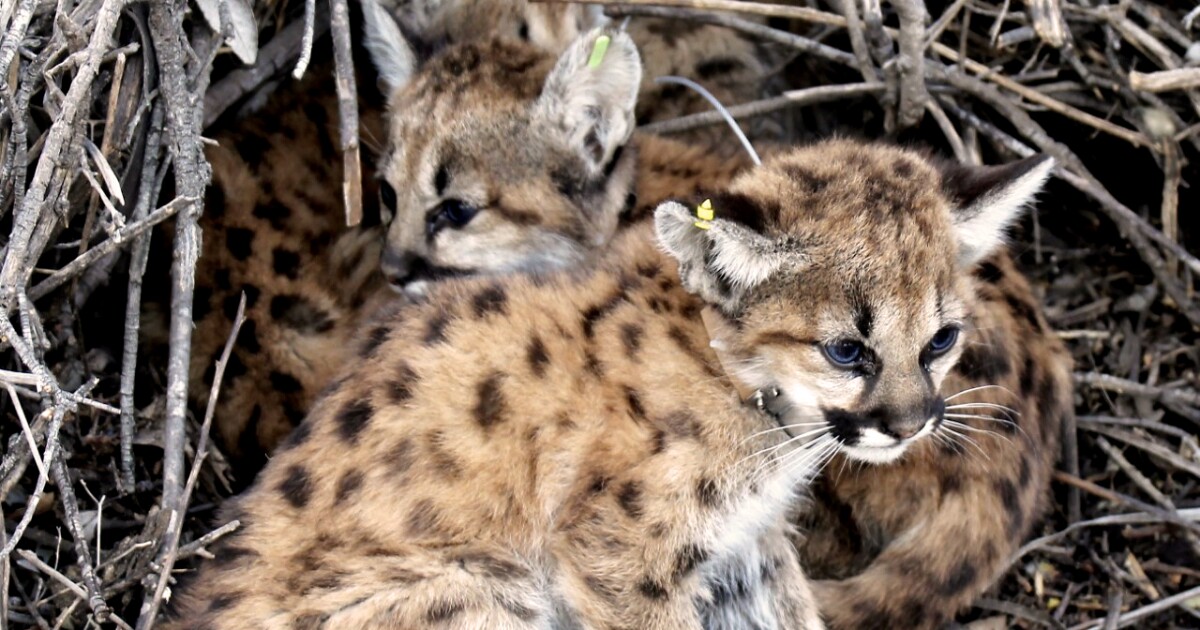 A pair of mountain lion kittens that died days after they were discovered in a Thousand Oaks office complex in November had three types of rat poison in their systems, the National Park Service said Wednesday.

They are the youngest mountain lions found by the park service to have anticoagulant rodenticides in their remains, officials said.

The kittens, P-100 and P-102, were members of an orphaned litter of four that were about 6 weeks old when they were discovered under a picnic table in the complex. Their two siblings survived and now reside at the Orange County Zoo.

A postmortem examination found that P-100 and P-102 were emaciated and suffered from a flea infestation as well as inflammation of their brains and feline parvovirus, a highly contagious virus that can be deadly for mountain lions, especially kittens.

Feline parvovirus causes an illness called feline panleukopenia, which likely contributed to the deaths of P-100 and P-102, the park service said.

It was not clear how the rat poisons entered the kittens’ systems, but researchers said ingestion often occurs when a lion eats a rat, squirrel or another animal that had consumed the bait. Kittens may be exposed to the toxins through nursing.

Park service officials noted, however, that the “kittens ultimately died of abandonment and a major cause of their emaciated condition postmortem was the lack of care from their mother,” not from rodenticide poisoning.

“This is the first time a mountain lion in the park’s 20-year study has been affected by parvo, and these two kittens are the youngest mountain lions in the study to have anticoagulant rodenticides in their system,” Jeff Sikich, a biologist specializing in mountain lion study, said in a news release from the park service.

The Santa Monica Mountains National Recreation Area has been studying mountain lions in the region since 2002.

In that time, 31 dead mountain lions have tested positive for exposure to anticoagulant rodenticides and seven have died from poisoning, Sikich said.

In July, several months before the kittens were discovered, a young male lion was found dead in a Newbury Park backyard. The lion, named P-R, had several anticoagulants in his liver.

“This, coupled with hemorrhaging in the kidney area, confirmed a diagnosis of rodenticide anticoagulant intoxication,” the park service said.

The litter was first discovered by an office worker in late November, huddling under a picnic table. The worker contacted wildlife officials and was told to leave them alone in hopes that they would return to the open space and reunite with their mother.

“At that young age, they would not be able to survive on their own, so their best chance for surviving in the wild was if their mother continued to care for them,” the park service said. The mother was unknown to the park service and was not being tracked.

The kittens were eventually tagged, collared and numbered P-100 through P-103 by the park service and the California Department of Fish and Wildlife, but they were returned to the area again in hopes that the mother would return.

They were rescued a few days later when biologists noticed that one of the kittens was in poor health and did not follow her siblings when they moved to a different location. They were taken to a veterinary hospital, where P-100 and P-102 died overnight.

“We did everything we could to reunite these kittens with their mother, but I’m afraid she was likely already dead or had abandoned them,” Sikich said in December.