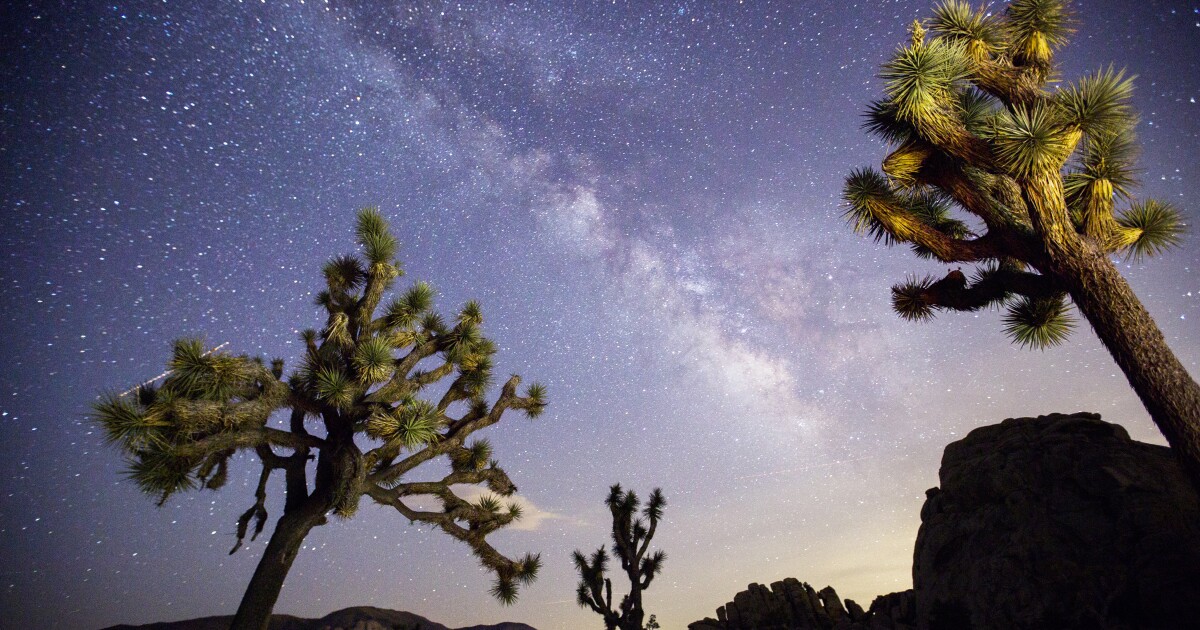 State biologists on Wednesday recommended against designating the western Joshua tree as threatened with extinction, saying claims in a petition filed by environmentalists about the effects climate change will have on the living symbols of the California desert are premature.

A final decision by the state Fish and Game Commission on the petition filed by the Center for Biological Diversity is expected in June. If the Joshua tree is not listed as threatened, it will be up to local jurisdictions to set limits on development of commercial, residential and solar and wind projects across thousands of acres of southeastern California’s sunniest real estate.

About 40% of the western Joshua tree’s range is on private land, where state endangered-species laws would apply, according to the petition. The area includes the rapidly growing cities of Palmdale, Lancaster, Hesperia, Victorville and Yucca Valley.

The renewable energy industry, while under fire for gobbling up desert land, maintains that by helping to eliminate greenhouse gas emissions, it is helping to mitigate climate change and the threat it poses to development of sensitive desert species such as the western Joshua tree.

The western Joshua tree “is currently abundant and widespread,” wrote authors of a 158-page analysis made public Wednesday. This abundance “substantially lowers the threat of extinction within the foreseeable future,” the document said.

The analysis determined that scientific evidence currently possessed by state wildlife authorities “does not demonstrate that populations of the species are negatively trending in a way that would lead the department to believe that the species is likely to be in serious danger of becoming extinct throughout all or a significant portion of its range in the foreseeable future.”

Advocates of western Joshua trees vigorously objected to the recommendation.

“Current domestic and global warming trends cast doubt on the tree’s future survival,” said Brendan Cummings, conservation director of the Center for Biological Diversity and a resident of the San Bernardino County desert community of Joshua Tree. “The species will likely be close to extinction in California by century’s end,” he said.

“Put another way — when the Titanic hit the iceberg, the ship’s captain didn’t wait until nearly every one on board had drowned to issue an SOS,” he added. “But that is essentially what state biologists are asking us to do with western Joshua trees in distress.”

As of this month, the entire range of the western Joshua tree remains in severe or extreme drought, and a recent National Oceanic and Atmospheric Administration report predicted those conditions may become the norm after 2030. Scientific modeling suggests the western Joshua tree in Joshua Tree National Park will lose upwards of 90% of its current range by the end of the century.

Recognizing a species as warranting protection under the California Endangered Species Act primarily due to the threat of climate change, however, is something that the California Department of Fish and Wildlife has never done before.

The polar bear became the first and only creature designated as threatened with extinction primarily because of global warming when it was added to the federal endangered species list in 2008. But federal authorities also issued special rules designed to exempt from the law offshore oil and gas drilling in prime polar bear habitat off Alaska’s north coast.

Jeremy Yoder, an evolutionary geneticist at Cal State Northridge, was disappointed by Wednesday’s recommendation. “We should take care of these trees now, before we have fewer options to work with,” he said.

Yoder suggests identifying areas where trees are struggling and replanting them with seeds genetically calibrated to withstand the harshest conditions. More research is needed, however, to identify such areas with confidence, he said.

The western Joshua tree is one of two genetically distinct species that occur in California. It has a boomerang-shaped range that extends westward from Joshua Tree National Park to the northern slopes of the San Bernardino and San Gabriel Mountains, then northward along the eastern flanks of the Sierra Nevada Mountains and then eastward to the edges of Death Valley National Park.

The eastern Joshua Tree’s range in California is centered in the Mojave National Preserve and eastward into Nevada. As many as 1 million eastern Joshua trees were incinerated by last year’s Cima Dome fire in the preserve.

While both the western and eastern species of Joshua tree are of conservation concern, the fate of the western species is most in doubt. Although there are millions of western Joshua trees and its extinction is not imminent, recent studies show its range is contracting at lower elevations and its reproduction has all but come to a halt in many areas.

After the petition was filed in 2019, the state wildlife commission unanimously voted to advance the western Joshua tree‘s candidacy, saying there was substantial information indicating that listing may be warranted.

Since then, new scientific studies have been published assessing ever-increasing threats to its habitat: sprawl, renewable energy projects, military activities, grazing, off-road vehicles, mining projects, an ongoing boom in construction of warehouses in Victor Valley and Antelope Valley, and the most severe drought in at least 1,200 years.

On a recent morning, Cummings hiked across a mile-square nature preserve near Joshua Tree National Park created, in part, to give federally endangered desert tortoises and more than 1,000 western Joshua trees within its boundaries a fighting chance for survival.

But signs of distress included bark eaten off trunks by small mammals desperate for food and moisture. Some trees had been charred by brush fires in exotic grasses — grasses that feed off nitrogen-heavy smog wafting in from Los Angeles. The forest has not reproduced baby Joshua trees in decades.

That’s because — according to scientists — hotter, drier conditions, cause the scant rainfall to evaporate more quickly than in years past. As a result, seedlings shrivel up and die before they can put down strong roots.

The low productive rate of the western Joshua tree may prevent it from expanding quickly enough into cooler and wetter habitat, scientists say. The tree’s capacity for movement is about a few hundred yards a generation.

But devising an enforcement and permitting system for preservation of western Joshua trees presents formidable logistical challenges. given their broad range and prevalence.

The species scientists know as Yucca brevifolia reaches about 40 feet in height and lives about 200 years.

Judging from the seeds in fossilized dung, Joshua trees were once dispersed across desert landscapes with help from elephant-size giant ground sloths. But these sloths went extinct about 10,000 years ago.

Today, antelope squirrels and other rodents are the Joshua tree’s main agents of seed dispersal.

More is at stake than their importance as a critical refuge for desert species. Joshua trees, which grow in the Mojave Desert and nowhere else, have become mainstays for movies, fashion shoots, advertising campaigns and wedding ceremonies.

They were named for the biblical figure Joshua by members of a band of Mormons traveling through the Cajon Pass back to Utah in 1857. They imagined the trees as shaggy prophets, their outstretched limbs pointing the way to their promised land.

During the 1980s, development in desert boom towns such as Lancaster and Palmdale replaced hundreds of thousands of Joshua trees with housing tracts and shopping centers. Many more were removed over the last decade to make way for renewable energy facilities.

Now, the biggest threat is climate change, according to Cameron Barrows, a research ecologist at UC Riverside, who said he wanted to see Joshua trees listed because such protections “might act as a catalyst toward creation of land use proposals that would benefit wildlife and developers alike.”

In the meantime, environmentalists are hopeful the commission will still vote to list western Joshua trees.

“This recommendation is a subtle form of climate change denial,” Cummings said. “Instead of taking action, they’re kicking the can down the road.”