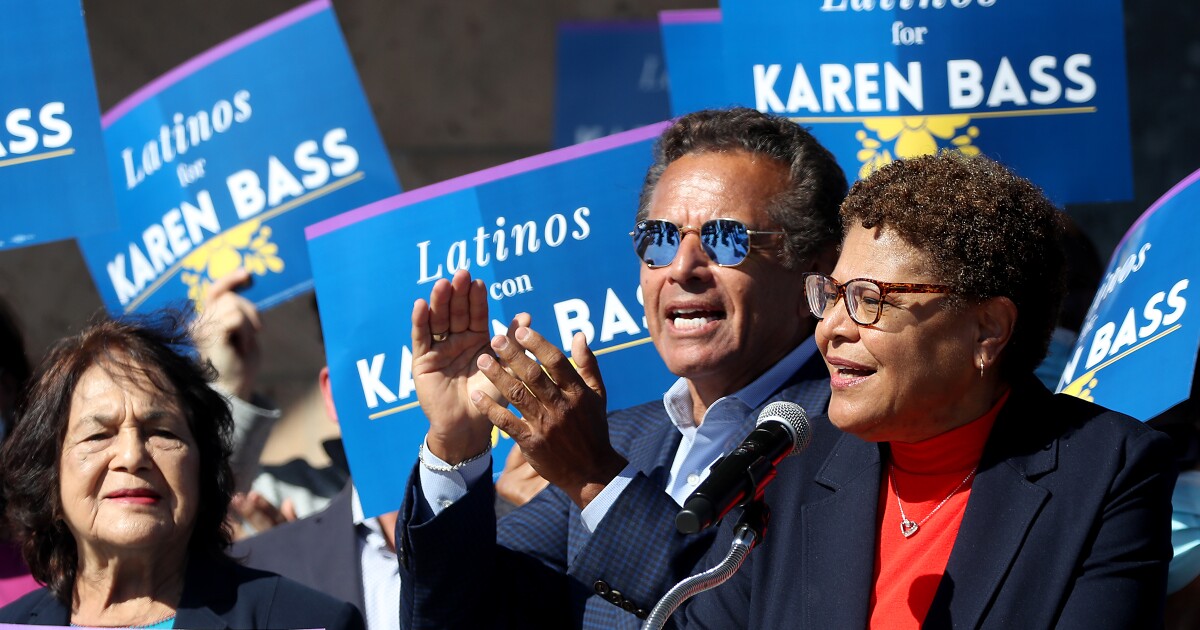 With citywide polling showing her in a dead heat with real estate developer Rick Caruso ahead of the June mayoral primary, Rep. Karen Bass launched a new effort on Tuesday to broaden her reach with Latino voters.

Latinos account for nearly a third of the more than 2 million registered voters in the city, according to Political Data Inc., and make up about one-fourth of the likely electorate.

During a program in Boyle Heights that included a five-piece mariachi band, a mix of English and Spanish and some of the best-known Latinos in California politics, Bass and her surrogates sought to make the case for why Latinos should support her campaign, citing her community organizing roots, support for blue-collar workers and long history with many of the leaders on the stage.

“This is not a new request to support Karen Bass,” said Mónica García, a Los Angeles school board member. “She has been with us through our great challenges and our great triumphs.”

Former Mayor Antonio Villaraigosa — an early endorser and prominent surrogate for Bass — said he has known the congresswoman for nearly 50 years.

“She lived on the south side, I lived on the Eastside. And we were coming together around important issues in our community, bringing Latinos and African Americans together in this town,” Villaraigosa said, referring to coalition work that Bass and he had done together beginning in the early 1970s.

Assembly Speaker Anthony Rendon (D-Lakewood) urged the crowd onstage, many of whom were clad in union T-shirts, to fight for Bass, imploring them to walk precincts and participate in phone banks.

Gabriel Montoya, an emergency medical technician and member of SEIU-United Healthcare Workers West, said his union and other locals would be working together to reach voters on the ground. (Fellow candidate Councilman Kevin De León also has strong support with local unions.)

Civil rights leader Dolores Huerta cited her long history with Bass, saying she “comes from the grass roots” and noted that Bass has a Latino family.

Bass was introduced by her Latina stepdaughter, Yvette Lechuga, who spoke to a more personal side of Bass rarely heard on the campaign trail. (Lechuga is the daughter of Bass’ former husband, Jesus Lechuga, and one of the congresswoman’s four stepchildren.)

“I don’t think people realize that she’s just been an amazing mother all this time behind the scenes,” Lechuga said, describing childhood beach and museum trips and how Bass was by her side when she battled leukemia and in the delivery room for Lechuga’s son’s birth. Bass’ young grandson Henry DePaz also joined them onstage.

Bass echoed Villaraigosa’s talk of south and Eastside coalitions when she took the stage, citing shared work on immigrant rights and police reform.

“We understood that each other’s struggle was the same,” she said to raucous applause. “They might be different issues, but the point is we were all fighting together for social and economic justice.”

The campaign’s new Latino outreach effort will be led by deputy campaign manager Frank Torres, who joined the Bass team this week and will be overseeing neighborhood organizing and outreach. Campaign spokesperson Anna Bahr said that the high-profile surrogates will help guide the campaign’s Latino outreach and overarching grass-roots strategy.

Half of likely Latino voters said they were undecided, compared with about a third of white or Black voters.

De León, a fluent Spanish speaker and the son of a single mother from Guatemala, represents the heavily Latino district where the Mariachi Plaza event was held, and Caruso has been running Spanish language TV ads.