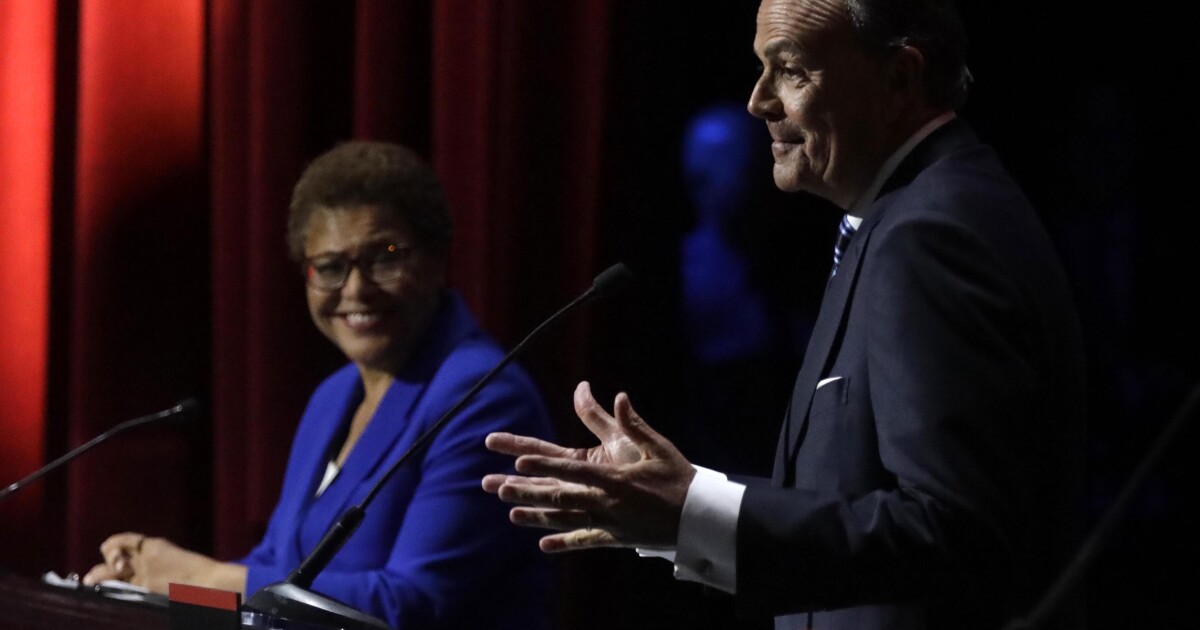 Voters upset over crime and a seemingly limitless geyser of cash have propelled Rick Caruso to the front of the race for mayor, reshaping the contest and offering Los Angeles a stark contrast between the billionaire developer and his chief rival, Rep. Karen Bass.

If the primary were today, Caruso, with backing from 24% of likely voters, and Bass, with 23%, would move to the November runoff, according to a new UC Berkeley Institute of Governmental Studies poll co-sponsored by the Los Angeles Times.

A contest between the two would feature stark divides of ideology, race and geography as well as different perceptions of Los Angeles and its governance, all of which have begun to emerge in the primary campaign.

The poll, taken from March 29 to Tuesday, marks a major shift in the campaign. Bass held a wide lead over Caruso in February, when the previous Berkeley IGS poll for The Times was conducted. Caruso, who had just entered the race, stood at 8% in that poll. Since then, his support has tripled while Bass has lost ground.

City Council Member Kevin de León, who also had 8% support in February, is now a distant third, at 6%. None of the nine other candidates competing in the June 7 primary had support of more than 2% of likely voters. About 40% of likely voters remained undecided. The runoff between the top two candidates will take place unless one receives more than 50% of the votes in the primary.

Caruso’s ascent results in no small part from nearly $9 million he has spent on television and digital advertising since February. Bass has not yet begun airing television ads.

“Caruso has had the airwaves to himself,” said Mark DiCamillo, director of the IGS poll, who has a wealth of experience in California politics.

“It’s a classic case where he’s getting out in front, and he’s defining himself before his opponents can define him on their terms…. Apparently the advertising is getting people’s attention.”

Many of those ads have focused on crime, including testimonials from former Los Angeles Police Chief William J. Bratton and frequent references to Caruso’s time on the city’s police commission.

Caruso has frequently hyped the scale of crime in the city, saying at a recent debate, for example, that the city was experiencing some of the worst crime in its history.

That is not true, but the poll clearly shows the role the crime issue has played in allowing Caruso, a former Republican who only recently switched his registration to Democrat, to compete in heavily Democratic Los Angeles. His backers in the poll are evenly distributed among Republicans, Democrats and nonpartisan voters, while Bass’s supporters are overwhelmingly Democrats.

The poll asked voters to pick two issues that were key to how they will vote. Homelessness was by far the top issue, cited by 61% of likely voters. No candidate has established an advantage on that topic, the poll showed.

By contrast, among the 38% of likely voters who said crime and public safety were top of mind, Caruso had a 4-1 lead over Bass.

Older voters and conservatives are especially concerned about crime, but the poll also found a high level of concern among Latinos and, in general, among working-class, non-college-educated voters.

The poll also painted a stark portrait of how differently supporters of the two leading candidates view the city’s leadership.

Likely voters divided almost evenly (48% to 45%) between approval and disapproval of Mayor Eric Garcetti, who was first elected in 2013 and can’t run again because of term limits. Those who approve of him favor Bass; those who don’t favor Caruso.

The poll’s findings will probably prompt tough questions in the camps of several current officeholders who thought they had a chance of taking the city’s top job. The low numbers for De León, Council Member Joe Buscaino and City Atty. Mike Feuer are likely to make fundraising, which has already been tough, even more challenging.

De León’s support was at 8% in February. Buscaino and Feuer, who were both at 4% in the February survey, are now at 1% and 2%, respectively.

One new entrant in the race, Gina Viola, a community activist who is a vocal critic of the city’s homelessness policies and has long called for the defunding and abolition of the LAPD, showed 2% support.

The poll, supervised by DiCamillo, was conducted online in English and Spanish among a representative sample of 2,047 registered voters in Los Angeles, of whom 1,380 were deemed likely to vote in June based on their degree of interest in the race and their voting history. The estimated error for the likely voter sample is roughly 3.5 percentage points in either direction. A full description of the poll’s methodology is available on the Berkeley IGS website.

A series of recent debates, along with increased coverage and advertising, probably mean more voters are starting to focus on the idea that a significant primary will be taking place in June. But a large share of those who say they will vote still have only a vague sense of the candidates.

Bass, who is one of two Black members of Congress from Los Angeles County, has support of nearly half of likely Black voters and 40% of white liberals. Black voters make up just under 1 in 10 of the city’s likely voters while white liberals — the largest bloc of voters in the city — make up 4 in10.

Caruso holds a large lead among whites who identify themselves as conservative or moderate.

No candidate has emerged as a clear favorite of Latino voters, who make up about one-fourth of the likely electorate. Half said they were undecided, compared with about a third of white or Black voters.

Latino voters tend to decide late in campaigns, said several political experts, including DiCamillo. That’s in part because the Latino electorate is younger on average than the rest of the voters, and younger people typically pay less attention to politics. More than half of likely voters younger than 40 said they’re undecided, compared with 29% of voters older than 65.

Still, some political analysts were surprised by the lack of support for De León, who has put the struggle of working-class voters at the center of his campaign pitches and represents a heavily Latino district.

Both of the leading candidates still have work to do to introduce themselves to the Latino electorate. The poll found 57% of Latino likely voters saying they didn’t know Bass well enough to have an opinion of her; 53% didn’t know Caruso well enough.

“The fact that they’re undecided, in order to change that, there’s really going to have to be money and tailored messaging.”

She noted that Caruso has not only been advertising on Spanish-language television and radio stations but also with streamers on websites like YouTube, which candidates sometimes use to reach younger Latino voters.

In addition to the ideological and racial differences, the poll also found a clear split by geography, with Caruso leading in the San Fernando Valley while Bass has a large lead in South Los Angeles and a smaller, but still significant, margin on the Westside, parts of which she has represented while in Congress.

Jessica Lall, president and chief executive of the Central City Assn., a business-backed group based in downtown Los Angeles, said she spent a lot of time campaigning in the Valley before dropping her own mayoral bid in February.

She heard a lot from voters there about how they “are looking for someone who’s really going to be present who understands the economy and understands how to address public safety.”

“I think his sort of background, message and demographic mirrors what high-propensity Valley voters are looking for,” said Lall, who has not decided whether to endorse a candidate.

Caruso has about a 2-1 lead over Bass in the Valley, which is home to about a third of likely voters. Her strongholds in South Los Angeles and the Westside together make up another third of the likely electorate.

In addition to his focus on crime, Caruso has also lambasted what he’s called career politicians, who he says are to blame for the ills of the city and the corruption that has plagued government.

Those pitches appear to have found a receptive audience.

Support for Caruso also lines up strongly with opposition to Los Angeles County Dist. Atty. George Gascón, whose opponents have sharply criticized him for not being tough enough on crime.

“I think in a crowded race like this, being able to distinguish yourself is important, and he’s really in his own lane.”