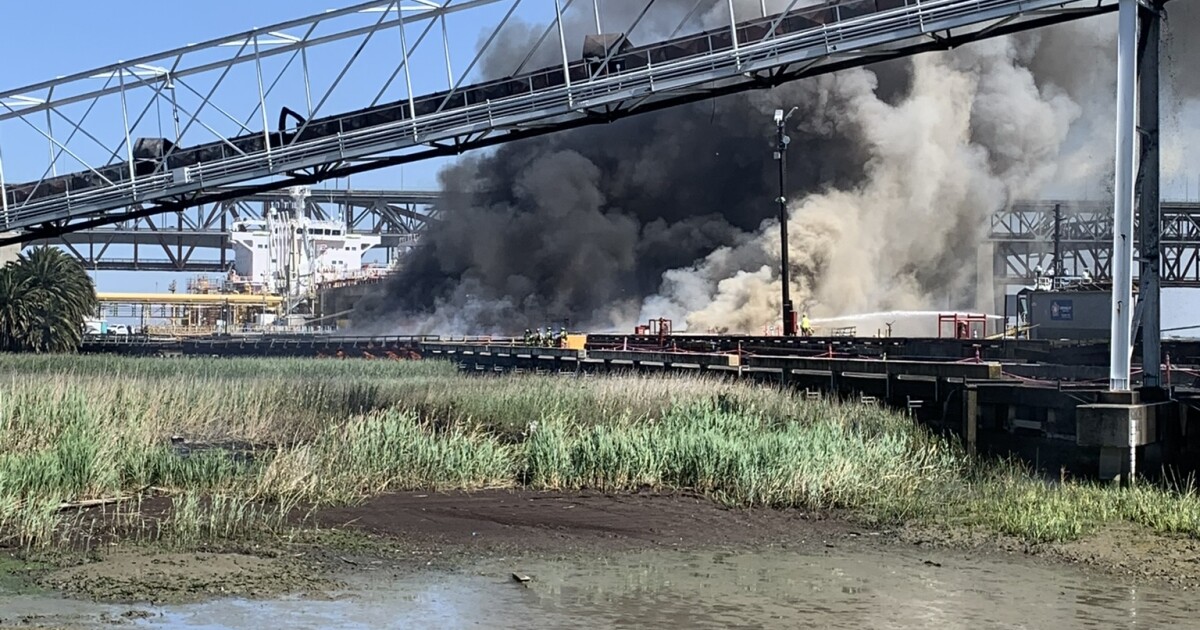 A fire that began near silos containing petroleum refining materials engulfed a port in the Bay Area city of Benicia, sending a wooden pier crashing into the water.

The flames have made the port area difficult to access by land, so the fire could burn for another day or two, said Deputy City Manager Mario Giuliani at a Zoom press conference Saturday evening.

Wooden beams on the docks are coated in creosote, a waterproofing material that is highly flammable, causing plumes of black smoke to shoot into the sky, Giuliani said.

The Solano County Public Health Department has been monitoring air quality, and “they have not had any emissions that have triggered on their devices,” he said.

The Yolo-Solano Air Quality Management District listed the air quality as “good” and had not issued an alert for the fire as of 8 p.m.,

No one has been injured, Giuliani said, and the cause of the fire is under investigation.

About 60 firefighters from various agencies converged on the port area after the fire began at about 12:20 p.m.

Public works crews have used a backhoe to dig a trench so fireboats can get in, Giuliani said. The best time to deploy the fireboats is at low tide.

“Really, the only access to the pier is through fireboats,” Benicia Fire Chief Josh Chadwick said at an earlier press conference.

The fire appears to have started at the base of silos that store petcoke, a petroleum refining product.

Firefighters extinguished flames in front of the silos, Chadwick said, but had a harder time with the fire on the rubber-and-metallic conveyor belts used to move the petcoke to tanker ships.

Eventually, the flames jumped to the nearby docks, Chadwick said.

Benicia is a city of about 28,000 residents on the northeast edge of San Francisco Bay. It was briefly the state capital in the 1850s.

The city owns the port, leasing space to Valero Energy Corp., which runs a refinery there, and Amports, which stores and transports vehicles and offers tracking services through the docks.