2 arrested in largest drug bust in O.C. in more than a decade 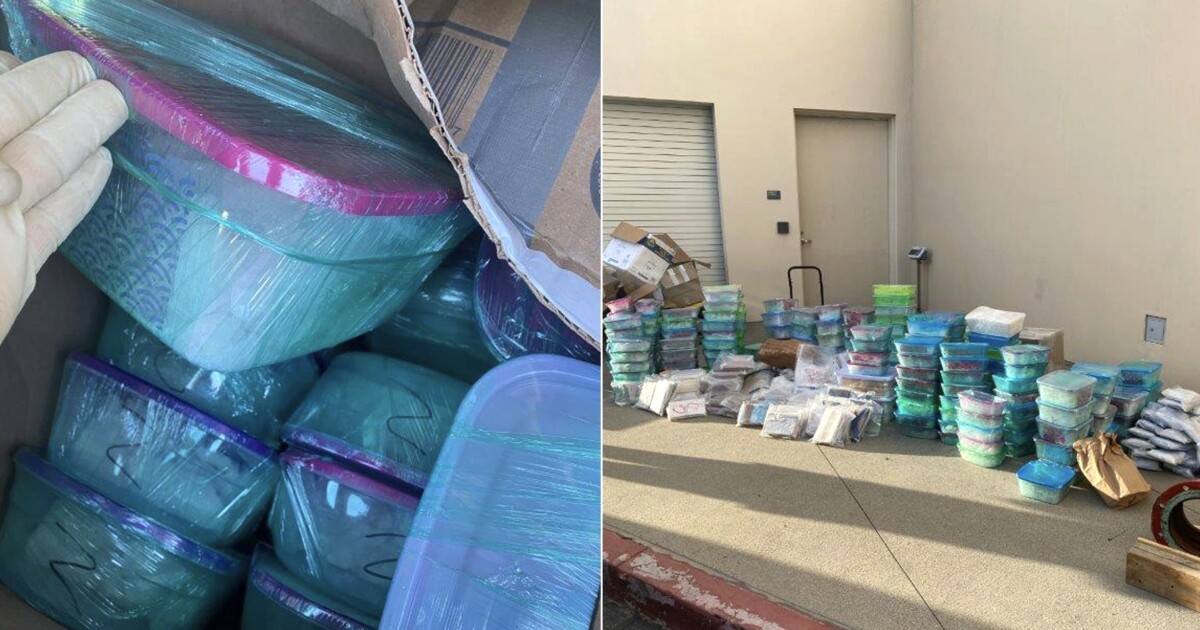 Two Buena Park men are facing felony charges in connection with what prosecutors are calling the largest drug bust in Orange County in 16 years.

A lethal dose of fentanyl is as little as 2 milligrams, the D.A.’s office said, and the recovered amount was “enough to kill 4.7 million people.”

Officers also seized 821 pounds of methamphetamine and 189.7 pounds of cocaine after pulling over the minivan leaving a Buena Park home.

Fentanyl, a powerful synthetic opioid, is as much as 100 times more potent than morphine, according to the U.S. Drug Enforcement Administration, which on Wednesday released a letter warning state and federal law enforcement agencies that the drug was driving a nationwide spike of mass overdose events amid the worsening opioid epidemic.

In the last two months alone, there have been at least seven confirmed mass overdose events tied to fentanyl across the U.S. resulting in 58 overdoses and 29 deaths, the agency said. The drug is often mixed with cocaine and methamphetamine, and many victims do not know they are ingesting fentanyl.

“Millions of unsuspecting people have the grim reaper looking over their shoulder and they have no idea how close they actually are to dying from taking a single pill,” Orange County Dist. Atty. Todd Spitzer said in a statement about the bust. “Fentanyl is cheap, it’s easy to get and it is killing our children, our coworkers, and tens of thousands of innocent Americans who don’t have to die.”

In November, Spitzer warned drug dealers and distributors in the county that they could be charged with murder if their drug activities result in someone’s death. The nation last year surpassed 100,000 overdoses in a 12-month period for the first time largely due to the drug, according to the U.S. Centers for Disease Control and Prevention.

“With fentanyl in an estimated 40 percent of street drugs, it’s not a matter of if but when someone you know and love dies from fentanyl,” Spitzer said Wednesday. “We have to continue to do everything we can to combat this deadly drug epidemic and save lives.”

They have pleaded not guilty and remain in custody on $5-million bail, the D.A.’s office said. An attorney for the men did not immediately respond to a request for comment.

If convicted of all charges, both face a maximum sentence of 37 years and 4 months, according to the D.A.’s office.

A preliminary hearing is set for June 7.

Visiting a state park? A library card can get you in for free