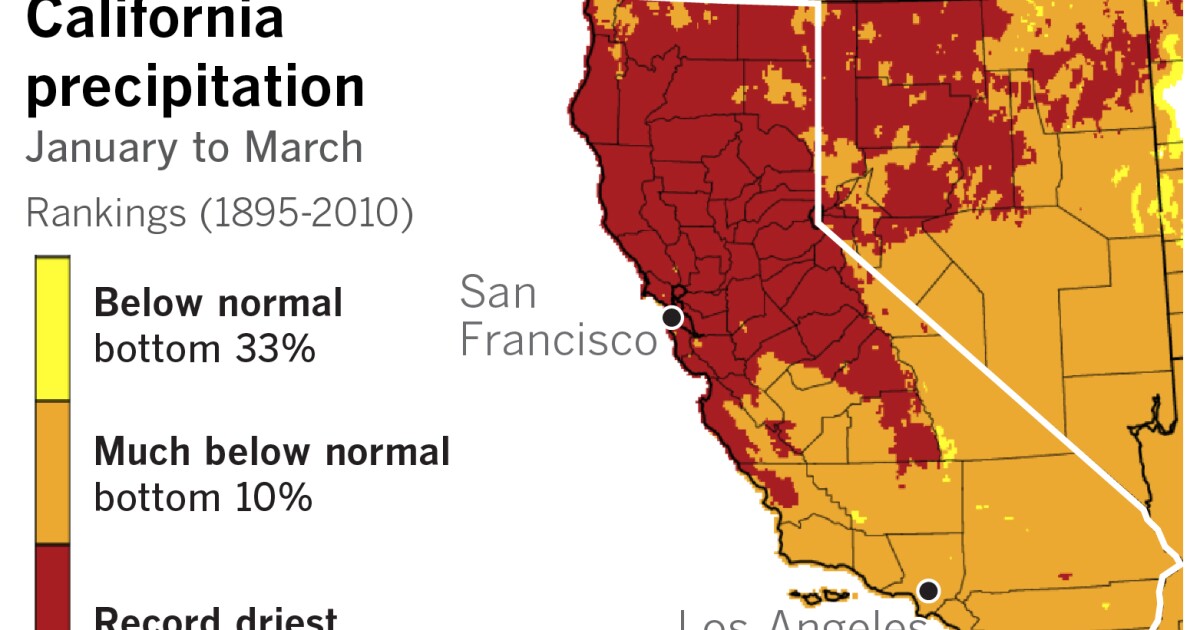 Heat and dry Santa Ana winds with elevated fire danger are on tap through Friday in Southern California, with record high temperatures possible Thursday and Friday, forecasters said, but conditions are expected to cool through the weekend and turn breezy and colder with a chance of showers early next week.

Moderate Santa Ana winds, gusting 30 to 50 mph, are forecast for Wednesday through Friday in L.A. and Ventura counties. A heat advisory will be in effect from 11 a.m. Wednesday through 6 p.m. Friday, and temperatures could soar into triple digits for coastal plains and valleys, as well as in the Santa Clarita Valley and the Santa Monica Mountains, the National Weather Service said. Red-flag fire warnings are not expected, however, because vegetation is still green from late March rains.

But after record precipitation in December, California has been mostly parched through what are normally the state’s wettest months. The northern half of the state racked up its driest January-to-March period on record, and the southern half falls almost entirely in the much-below-normal category.

The heat and winds will be a sharp reversal from conditions last weekend, when a thick marine layer kept skies overcast west of the mountains and produced areas of drizzle.

“We won’t see too much of low clouds this coming week,” said Mark Moede, a meteorologist with the weather service in San Diego.

A satellite picture taken Tuesday afternoon showed clear skies over the length of the state.

A strong upper-level ridge of high pressure will build over the West Coast by Thursday, driving the hot weather this week, Moede said.

Meanwhile, in the Upper Midwest and Great Lakes regions, a deep upper-level low-pressure system with very cold air will be in place, and cold, dense air will sink down to ground level in the Great Basin.

This air will provide the high-pressure component at the surface for Southern California’s Santa Ana winds. The pressure gradient, or difference, between this surface high pressure to the east of California and lower pressure at the coast is what drives the winds, which are expected to be strongest Wednesday into Thursday morning.

As is typical of Santa Ana winds, which heat up and dry out as they flow downslope to sea level in Southern California, relative humidity levels could plummet as low as 3% to 10%. The unseasonable nature of the heat wave could heighten effects for heat-sensitive people and those working or recreating outdoors, and forecasters urge people to make sure they’re adequately hydrated.

Wednesday’s high temperatures are expected to be 85 to 95 degrees. Readings could rise as high as 90 to 102 Thursday and Friday, including in coastal areas.

The Santa Ana pattern will break down Sunday, and a trough of low pressure will ride down the West Coast. That will bring below-average temperatures and a chance of showers early in the week, which culminates in Passover and Easter, although models indicate the system is likely to be a mostly dry inside slider.