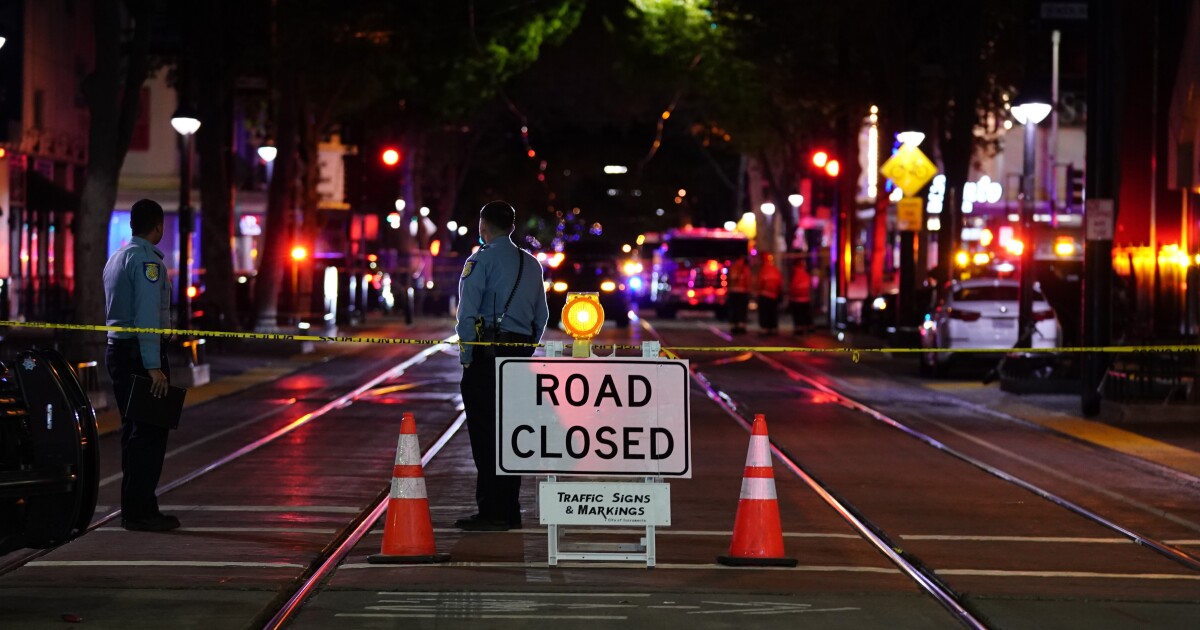 The shooting that left six people dead and 12 wounded in downtown Sacramento on Sunday has sparked renewed calls among California officials, city leaders and activists for new legislation that they say could help prevent more bloodshed.

Hours after the barrage of gunfire in an entertainment district near the state Capitol, City Councilwoman Katie Valenzuela said putting more law enforcement in the streets won’t necessarily stop the violence. She said the state and federal government need to “step up on guns.”

“It didn’t need to happen at all if we had the right laws in place,” Valenzuela said.

Gov. Gavin Newsom said the state is once again mourning lives lost “in yet another horrendous act of gun violence.”

“The scourge of gun violence continues to be a crisis in our country, and we must resolve to bring an end to this carnage,” Newsom said in a statement.

In December, Newsom directed the state Legislature and Atty. Gen. Rob Bonta to develop a policy that would let Californians sue gun manufacturers and distributors of assault weapons and “ghost guns,” which can be assembled at home and have no serial numbers.

Since then, lawmakers have proposed at least four related pieces of legislation. One bill would allow Californians to sue those who manufacture, distribute, transport and import assault weapons and ghost guns. Other measures focus on ghost guns and limiting certain firearms advertising to minors.

Bonta is sponsoring a proposal to more stringently regulate marketing and distribution by the gun industry and allow the state and victims to sue those who skirt firearms laws.

“Angry that there is more we can do to stop gun violence like this from happening in the first place,” Hertzberg said. “Just blocks from the Capitol, this mass shooting will be a reminder of action needed to save lives. The Legislature will act.”

Hertzberg said the bills pending in the Legislature will “get illegal weapons off the streets of California.” He said the shooting shows that “lives are at stake every single day we fail to take these common-sense actions.”

The shooting occurred just after 2 a.m. Sunday. The authorities said an unidentified person in a car drove up and unleashed a barrage of bullets into a crowd of people before fleeing.

A second person also fired a gun, although it was not clear whether that person was also in the car or in the crowd.

Police confirmed a stolen handgun was recovered. However, the authorities suspect at least two different weapons were fired, according to a law enforcement source.

Some witnesses reported hearing multiple shots fired in quick succession, but police declined to say if they believed one of the guns was a semiautomatic weapon.

“There is a video out in the community that appears to depict rapid fire,” said Zachary Eaton, spokesperson for the Sacramento Police Department. “But we are still working through the investigator report, so I can’t confirm that right now.”

“In what sane society do we allow the proliferation of assault weapons in the way that we see being used indiscriminately, not just in Sacramento but in other parts of the country?” he asked.

He asked if everyone could acknowledge that “there is absolutely no place for rapid-fire assault weapons anywhere, anyhow.”

“Can we make that distinction? Obviously we can’t,” Steinberg said. “We couldn’t make it after Sandy Hook. … It is a sickness in our country. It is a sickness in our culture. And until we confront it and begin making those reasonable distinctions, to respect responsible gun ownership and get rid of these weapons of mass destruction and commit ourselves to doing that, how can we say that something like this would never happen again?”

Moms Demand Action, a California group that advocates for stronger gun laws, said in a statement that it is “sick and tired of waking up to news of the latest senseless act of gun violence” and that its members will continue pushing for changes to protect lives.

The violence came after a Feb. 28 shooting in a church in the Sacramento suburbs. A man killed four people, including three of his children, before turning the gun on himself.

Sunday’s shooting was one of the three deadliest mass killings in the country this year, along with two other shootings that also left six dead in Milwaukee and Corsicana, Texas, according to data compiled by Gun Violence Archive, a research group in Washington, D.C. The worst mass shootings last year each left 10 dead, in San Jose and Boulder, Colo.

Nationwide, 120 people have been killed in mass shooting so far this year, according to the group’s data. The group says gun violence has claimed 10,815 lives so far this year, including homicides, suicides and unintentional shootings.

How the mass shooting in Sacramento went down: What we know now