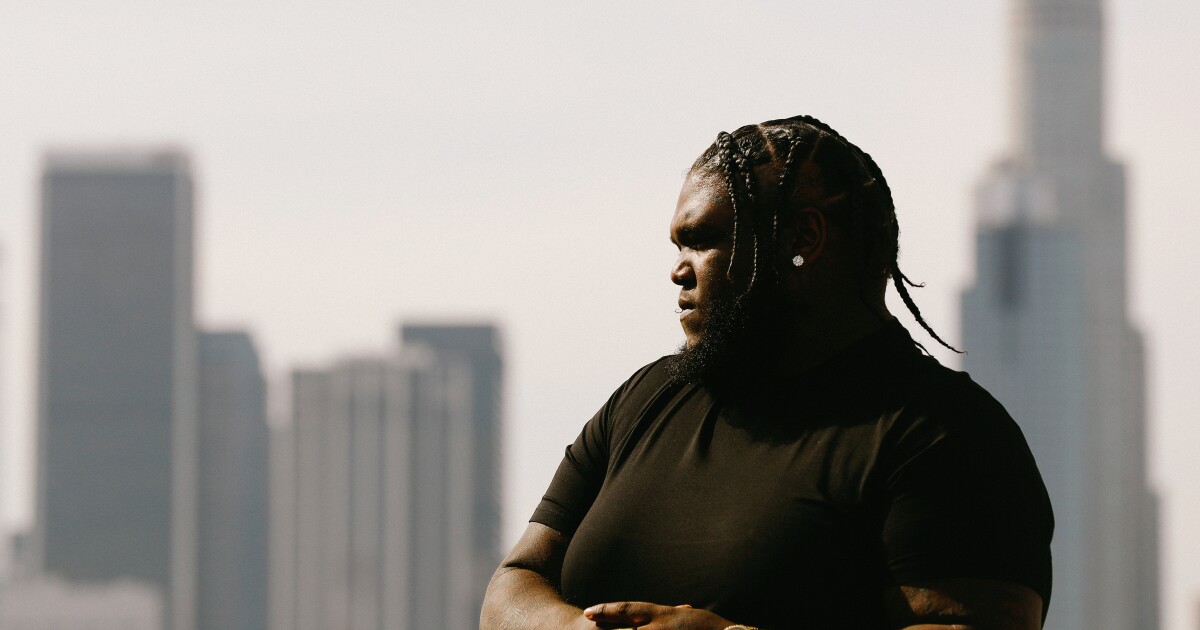 It was a sunny day in Southern California, and his son was expected to be born at any moment. Ahead of the birth, the rapper contemplated how he’d slow down his own lifestyle and how he’d protect his son in a scary world.

However, his eyes snapped from the future to the present once he got the phone call — Nipsey Hussle, his friend, mentor and All Money In label boss, had been shot outside his storefront at Crenshaw and Slauson. Pacman hopped in his car and raced west on Interstate 10, hoping to help preserve a life before welcoming a new one.

Later that day, it became official — Hussle was dead.

“My son ended up being born on the date of the burial, April 12th,” he said.

On “Till We Meet Again,” the final track on Pacman’s new album, “Bulletproof Soul,” the rapper, born Da’Monte Lyles, outlines his recollections of that day and his later attempts to reconcile with the loss. Released on the third anniversary of Hussle’s death through L.A. label OTR Records, the title pays homage to Pacman’s favorite Sade song of the same name, which Hussle shouted out from behind the wheel of his drop-top Ferrari on “Victory Lap.”

The project was produced by Hit-Boy, the Grammy-winning producer who’s made hits with Drake, Nas and Kendrick Lamar (and produced Hussle‘s final track, “Racks in the Middle”). Pacman approached Hit-Boy about making a tape in 2021, and the conviction in his voice made it an easy decision.

“He always was a solid dude, but we’d never worked on music,” Hit-Boy said. “He came to me like, ‘What we gotta do to get this done? I want you to know I’m serious, and I want you to take this serious.’ That’s what made me really be like, ‘We gotta do this, for real.’”

It’s an album built for a cruise through the city, centered around a relaxed, West Coast-centric rhythm. The two show their versatility throughout, connecting on up-tempo tracks like “Not Yo Average” and slow-rolling songs like “New Heat,” which features fellow All Money In artist J Stone.

“Till We Meet Again” is special for both rapper and producer, giving Hit-Boy flashbacks to where he was on that infamous day.

“I know everyone who was a part of Nip’s life remembers where they were at, how they were moving when they got the news,” Hit-Boy said. “It’s so vivid for me in my own experience. But [Pac] driving on the freeway, seeing the situation through his eyes, his pain, and the frustration he was dealing with getting that news, [was powerful].”

On a warm March day a few weeks before the project’s release date, Pacman, 30, sat in a high-rise apartment in downtown Los Angeles he uses as his office, watching a documentary on revolutionary Black nationalist Marcus Garvey. Aside from some images of Hussle and a few plaques, the walls are mostly bare, with the primary pops of color coming from the dozen or so fish milling about in a tank near the door.

“These two are the bullies,” he said, motioning to two orange cichlids loitering in the center of the tank. “This one’s an idiot. He got stuck in this little-bitty hole the other day.”

Pacman is a gentle giant, large in stature and friendly in conversation. He’ll dish for hours about his life and upbringing with a razor-sharp memory but struggles to answer when asked what he’d consider the biggest moment in his career — although he agrees when someone else in the room brings up the impact of his song “Zero Tolerance,” featuring Nipsey Hussle and Mozzy.

In the eyes of L.A. rapper Dom Kennedy, who views his friendship with Pacman as an extension of his brotherhood with Hussle, that humility made him a natural fit for the All Money In roster.

“Everybody doesn’t get drafted first,” said Kennedy, who appears on “Bulletproof Soul’s” “Find a Balance.” “I’ve seen [Pacman] at many shows with Nip, not performing, but just supporting his homie. Even if he didn’t have the guest spot, he’d still be present. Times like that is where you learn the most.”

Pacman grew up a few blocks southeast of Crenshaw and Slauson. The likes of Gerald Levert and the Commodores were in constant rotation in the house, although Pacman soon gravitated to the Southern rap sound and street lyrics of the Hot Boys, the New Orleans group consisting of Lil Wayne, Juvenile, B.G. and Turk. “That’s who I wanted to be like,” says Pacman.

Outside, his neighborhood was in turmoil. Gang culture had a firm grip around his Hyde Park apartment building, and a young Pacman saw it all on the mile-long walk to and from school — the dealers posted outside his building, the constant run-ins with the police, gang members recruiting new bodies.

“The older generation, they had the money,” he said. “They had the cars, the big chains, the rims and everything. That’s the first thing that made me want to get some money.”

By the time he was 10 years old, Pacman discovered his own hustle: taking out the trash at his apartment complex. He’d travel door to door in his building on 8th Avenue, offering to take out garbage in exchange for money or food stamps.

“I wanted some new shoes,” he laughed. “I used to wear my momma’s shoes to school, these beat-up Perry Ellis. I used to hate those things, they’d be leaning and everything.”

As the pocket change from moving trash bags became less and less appealing, Pacman graduated to the streets, against his mother’s best wishes.

Pacman never thought about making music until All Money In affiliate BH, who was already rapping, convinced him to hop on the mic. It took Pacman a minute to figure it out, but as soon as he heard his voice on the playback, he knew he’d found his true passion.

His early songs were abrasive and confrontational — dissing other hoods, boasting his work in the streets and rapping about situations “that could’ve had a n— doing life,” he remembered.

The music got a buzz online and in the community, but the ceiling was low and the presentation nonexistent. One day he ran into Hussle and gave him a blank, untitled CD, hoping the neighborhood hero would take him and his scattershot collection of songs to the next level.

“This ain’t it,” Pacman recalled his future crew member telling him. “If you really want to rap, this ain’t gonna work.”

Pacman took Hussle’s words to heart. He started rapping about his struggles, the pain of losing his father and growing up with a single mother.

Eventually he returned to Hussle with a new song, “Hotel Memories,” spilling his story over a soul sample.

“He had just got the Maybach,” Pacman recalled about cuing up his music for Hussle. “It was me and him riding in the Maybach, and that song came on. He told me, ‘This my favorite song, right here.’”

Hussle soon appeared on Pacman’s song “Grind Mode” and left room for his protégé to rap on “Where Yo Money At?” — a track on Hussle‘s acclaimed mixtape “Mailbox Money.” Hussle told Pacman to slap the All Money In logo onto his own projects, cementing him into the group.

Pacman moved out of Los Angeles in 2015 after tiring of incessant police harassment, planting roots in another city he doesn’t want to reveal publicly. Although he makes frequent trips to his Crenshaw neighborhood, he says L.A. as a whole doesn’t feel the same without Hussle.

“It’s weird being outside in L.A. now, since Hussle left,” he said. “I remember Peezy from Detroit came out here and said, ‘It don’t even feel the same out here.’ It’s crazy how he can come from Detroit and feel it too.”

For Kennedy, it’s heartening to see the tributes to Hussle across the city, sprawling from Crenshaw and Slauson to North Hollywood coffee shops. There’s hardly a day he doesn’t see a mural or a Marathon shirt.

“It’s a one day at a time thing,” Kennedy said. “For those of us who had the pleasure of knowing him, it’s hard. And I imagine it always will be. That won’t ever be a day he’s not in my thoughts.”

The Marathon Clothing store where Hussle was gunned down remains closed to the public. Hussle’s surviving family hopes to turn it into a site where fans can play tribute and reshape the surrounding shopping complex (which Hussle purchased with his business partners in 2019) into a community space. Plans are in motion for the Marathon Clothing store No. 2, however, which will soon reside in the Melrose District.

“This second location is a dream that Hussle always had, and it’s important that his kids are able to see his plans fulfilled,” Hussle‘s brother Blacc Sam told the Guardian in February.

All Money In is still rolling along despite the loss of its leader. J Stone has dropped several well-received projects since Hussle’s killing, most notably “The Definition of Loyalty” in 2019. Cobby Supreme — who Dom Kennedy calls the “battery of the All Money In train” — is pushing the All Money Business clothing brand, which he started with Hussle.

But Pacman said the collective doesn’t come together as often as it used to.

“We still tap in with each other,” he said. “I just texted [Blacc] Sam, his birthday just passed a few weeks ago. I hit him just to check on him. But everybody’s doing their own thing now.”

Although the pain remains the same, as he raps on “The Cycle,” Pacman has reached the acceptance stage in his grief. He finds joy in his son, who’s already familiar with his music and reacts especially to Hussle‘s “Grindin’ All My Life.”

Still, “Bulletproof Soul” is dotted with RIPs even aside from Hussle, forcing Pacman to come to terms with death more times than he’d like.

“I accept expiration,” he said. “Everything living has to die. But I’m keeping faith because I really want to leave something behind, to make them remember me. I’ll think, when I go, are they going to have murals of me everywhere?”

Louis Vuitton shoplifting could be charged as felony robbery