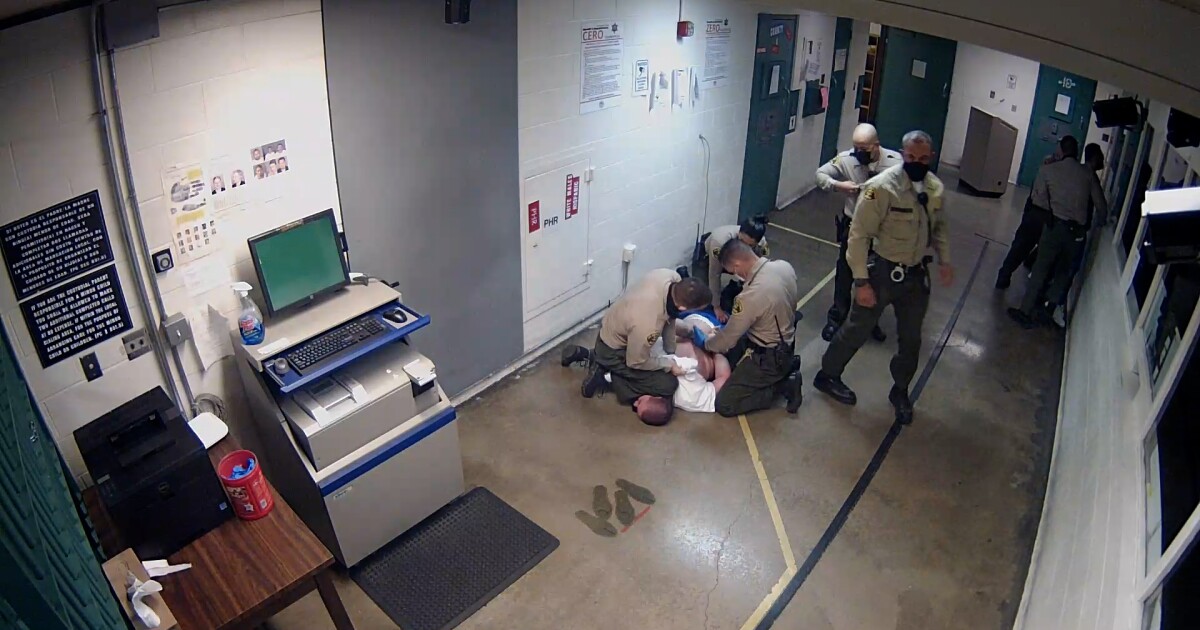 Los Angeles County Sheriff Alex Villanueva accused high-ranking members of his department Tuesday of attempting to cover up an incident in which a deputy knelt on the head of a handcuffed inmate for more than three minutes.

Villanueva made the allegations at a hastily called news conference he held to discuss a Times report that revealed the violent detention, which happened about a year ago, and detailed efforts by department officials to keep it under wraps.

The sheriff denied an allegation made by a top-ranking department official who is seeking to unseat him that he had been involved in the cover-up. Villanueva also indicated that he had shaken up his “senior command,” but refused to provide specifics about whose jobs had changed and why.

He announced a new administrative investigation and named an acting assistant sheriff, Holly Francisco, to oversee countywide operations, including the Court Services Division, where the incident occurred. Francisco is taking over for Robin Limon, who held the position at the time of the kneeling incident.

Villanueva did not say whether Limon, who could not be reached for comment Tuesday, was the subject of the investigation.

“This investigation involves the potential cover-up and some other disturbing elements,” he said, of a “process that inhibited the people that were conducting the administrative investigation from pushing it further up the chain of command.”

He added: “If I was aware of the efforts, it wouldn’t be a cover-up.”

The Times reported that department officials had been worried about the optics of a deputy kneeling on a handcuffed man’s head “given its nature and its similarities to widely publicized George Floyd use of force,” according to a commander who was critical of the cover-up.

Those officials decided not to pursue criminal charges against the inmate, who had punched the deputy in the face, to avoid drawing attention to the incident, according to the report by the commander, Allen Castellano. His report indicates that top executives above the level of division chief were aware of the incident early on. That could include only Villanueva, Undersheriff Tim Murakami or one of the three assistant sheriffs.

Castellano was subsequently targeted with an administrative investigation; officials alleged he should have done more by seeking a criminal investigation into the deputy. It is unknown what discipline, if any, Castellano received. Castellano declined to comment last week.

Sheriff’s officials waited until January — almost a year after the kneeling incident — to take the case against the inmate to prosecutors. The district attorney’s office filed two counts of resisting an executive officer against the inmate, Enzo Escalante.

The incident happened on the morning of March 10, 2021, two days after jury selection had begun 1,500 miles away in the trial of Derek Chauvin, the former Minneapolis police officer who would be convicted of murdering Floyd by kneeling on his neck.

At the San Fernando Courthouse, deputies were conducting routine searches of inmates before their court appearances, the internal records show.

Two of the inmates were talking, and deputies told them to be quiet.

As the pair continued talking and laughing, Deputy Douglas Johnson ordered one of them, Escalante, to stop and face the wall, according to Johnson’s report on the incident.

Escalante, 24, was awaiting trial on multiple charges, including murder.

Security video obtained by The Times shows Johnson walking closely behind Escalante through a hallway before ushering him toward a wall.

Escalante turned around and punched Johnson in the face multiple times.

The second inmate approached and was taken away by other deputies. Johnson and other deputies then took Escalante to the ground, positioning him facedown.

Twenty seconds into the fight, Johnson put his knee on Escalante’s head.

About 30 seconds later, a deputy — one of four hovering over Escalante — handcuffed him.

Lying still with his hands handcuffed behind his back, Escalante appeared compliant. Johnson nonetheless kept his knee on Escalante’s head for three more minutes.

Deputies eventually “hobbled” Escalante, tying his legs together before lifting him onto a wheelchair and strapping him in, the video shows.

Records show Escalante was taken to a hospital for treatment of minor injuries, including contusions to both ears and abrasions on his neck.

Johnson could not be reached for comment last week.

A spokesperson initially said Villanueva found out about the incident in October. On Tuesday, after The Times pointed out discrepancies in his timeline, the sheriff said the information reached his office in November and he immediately launched a criminal investigation into Johnson.

Eli Vera, a commander in the Court Services Division who is running for sheriff, said Villanueva viewed the video at an aide’s desk within days of the incident in March of last year. Vera said he notified the Office of Inspector General of the incident when he learned about it.

Villanueva gave roughly an hour’s notice of Tuesday’s news conference at the Hall of Justice. He ignored requests to answer questions by a Times reporter, who showed up just after the 23-minute briefing was over.

During the news conference, Villanueva accused The Times of delaying publication of the kneeling report to coincide with his campaign kickoff.

The Times released this statement: “The sheriff’s claims are false, and The Times stands by its reporting.”