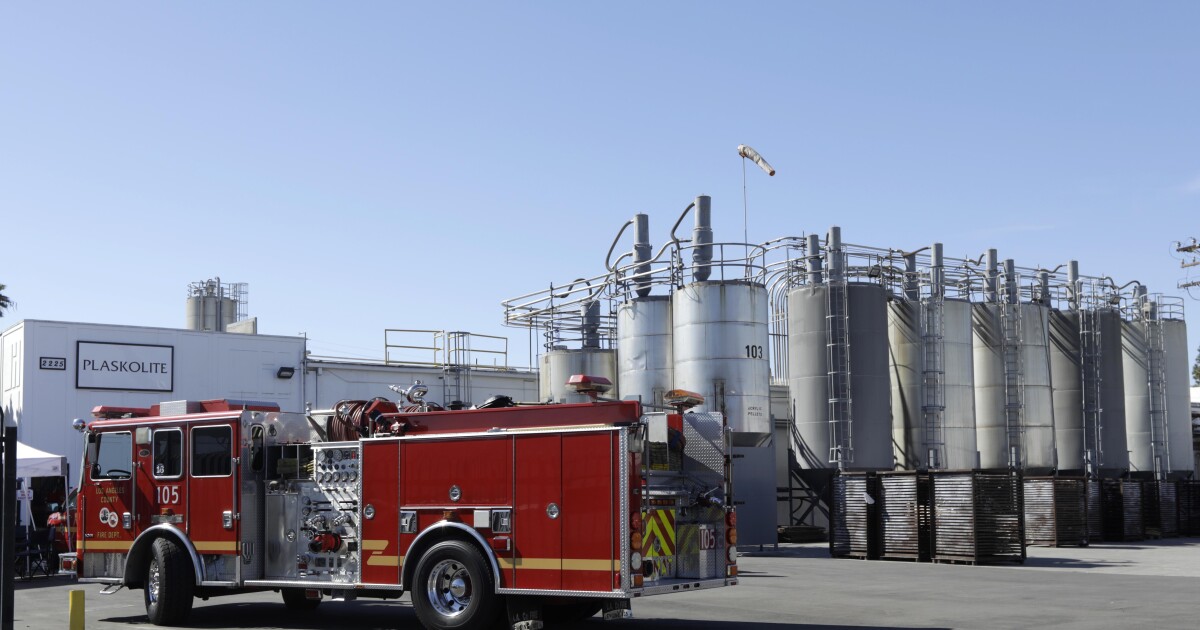 More than 200 odor complaints poured in to air quality regulators Thursday after a bag containing a chemical used to make plastic sheeting broke open at a Compton plant in the early morning, prompting investigations.

The incident began around 1:30 a.m. when a roughly 300-pound bag of the chemical was placed into an oven at the Plaskolite plant, according to Roger Hamilton, the company’s vice president of operations. The bag split open around 3:30 a.m. and started emitting a strong odor.

The leaked chemical is methyl methacrylate, or MMA, which is also used in superglue, Hamilton said.

The Los Angeles County Department of Public Health said the South Coast Air Quality Management District notified it at 9:30 a.m. of the spill inside a reactor oven.

“The spill was caused by a ruptured bag that usually captures odors from the chemicals as they undergo the conversion process from liquid to solid,” public health officials said. The department “has not received any complaints from the public.”

MMA is a colorless liquid with a slightly fruity odor and can irritate the eyes, nose, lungs and skin, public health officials said. Humans can detect the chemical’s odor at concentrations of about 0.05 parts per million.

A Los Angeles County hazmat team, as well as firefighters, were still at the scene late Thursday afternoon assisting with cleanup, said Esteban Benitez, a spokesperson for the county Fire Department.

Asked if there were any potential health risks, Benitez said that the incident was still under investigation and that he was unable to provide further information.

The Department of Public Health said it measured “odors and airborne levels of the chemical” in nearby residential areas. “All readings were nondetectable at 0.0 parts per billion, indicating that the areas measured are safe for the public,” the department said.

Public health officials said they would continue to monitor indoor and perimeter readings for any risk to the public.

“If residents experience symptoms they should seek personal medical attention from their primary care physician,” the department said.

Michael Kleinman, a professor in the Department of Environmental and Occupational Health at UC Irvine, said MMA is relatively low on the toxicity scale but can cause irritation, particularly in sensitive groups. He said the Environmental Protection Agency considers it unlikely to be carcinogenic, though “it’s certainly not impossible in some people.”

By 5:15 a.m., the South Coast air district began receiving complaints concerning plastic and chemical smells around the Long Beach area. The number rose to more than 200 by late afternoon, said Kim White, a spokesperson for the district.

White said the cause of the spill and possible enforcement action will be assessed at the conclusion of the investigation.

MMA has “a very low odor threshold,” meaning it can be smelled at very low concentrations, Kleinman said. He described it as a somewhat sweet smell.

“Pretty much all of our neighbors, that were kind of downstream of the plant, were able to smell it,” said Hamilton, the Plaskolite executive.

Hamilton said at the heart of the spill was an operator who believed he was turning an oven on, to bake the substance, but actually turned it off.

Hamilton said the substance needs to be baked to undergo the intended reaction. With the oven shut off, the bag instead swelled and eventually cracked, he said.

The substance, he said, begins as a liquid and then is baked into a solid. It’s used by Plaskolite to make plastic sheets, he said, such as the ones that went up as protective partitions during the pandemic.

However, once the process begins, it can’t be stopped, Hamilton said. So factory operators continued baking the substance into Thursday afternoon. The longer it bakes, he said, the more the smell dissipates.

He said the hazmat team directed the factory to add a scrubber to the oven exhaust, which contains an odor neutralizer.

Symptoms of exposure to the substance are “concentration-driven,” Kleinman said.

“If someone was right in the cloud of the emission, they might get a lot more,” he said, “but with that low odor threshold, most people would smell it and go away. They wouldn’t hang around to get more exposure.”

Chronic exposure in the workplace can lead to respiratory symptoms, including worsened lung function, Kleinman said.