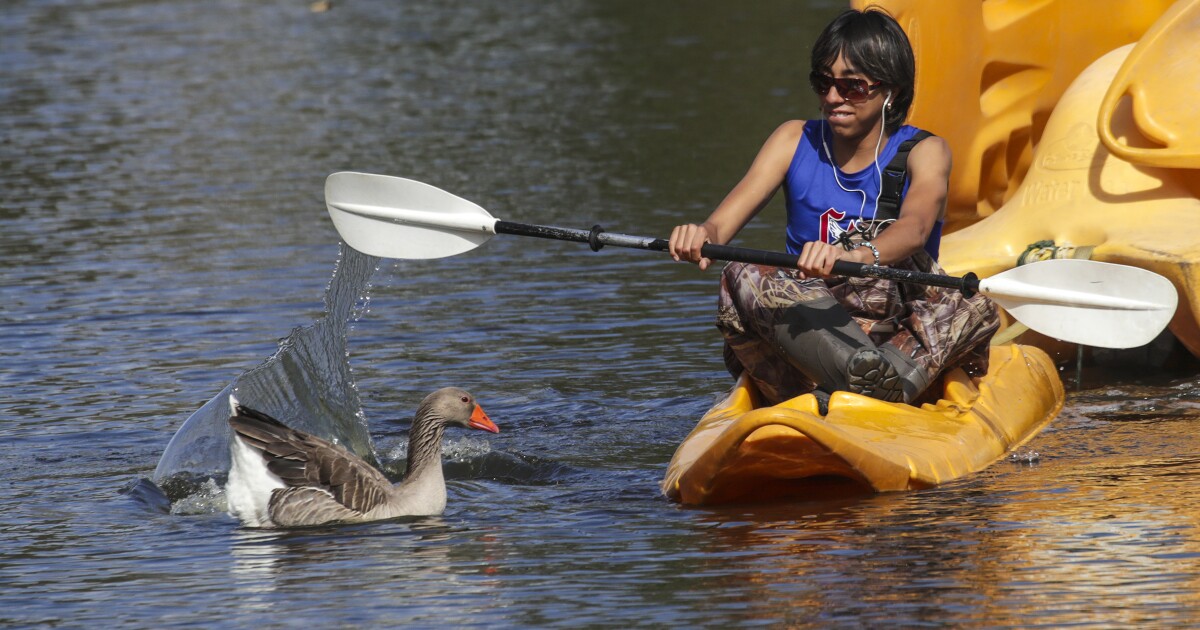 California’s record-dry start to the year is converging with record-high temperatures as an early spring heat wave settles over large swaths of the state.

Multiple temperature records were shattered Tuesday, according to the National Weather Service, including some that were nearly a century old.

In Santa Rosa, a sweltering 89-degree high broke the previous record temperature for the date, 86 degrees, set in 1926. In Camarillo, 90-degree temperatures broke an 88-degree record last seen in 2008 and 1926.

Burbank tied an 86-degree record set in 2008, while downtown Sacramento tied the 1915 record of 82 degrees.

The heat stretched all the way into the northern reaches of the state, with Ukiah recording its hottest day of the year thus far — 90 degrees, just one degree shy of the 1926 record, officials said.

Ukiah’s high was only 4 degrees off the hottest temperature in the nation for the day: 94 degrees in Death Valley.

Sweet said temperatures across the Southland were 15 to 20 degrees above normal, and more heat is likely Wednesday. In the Los Angeles areas, highs are expected to climb into the 80s and lower 90s.

On Thursday, a gradual cooling trend will begin and stretch into Saturday, he said, “but it’ll still be above-normal.”

The heat wave spells trouble for the drought-dried state, which is already experiencing dwindling snowpack and shrinking reservoirs after an arid start to the year. January and February were the driest on record in California, and officials say March could follow suit. The three-month stretch is typically the heart of the state’s rainy season.

Statewide snowpack on Wednesday was 52% of normal for the date, while the water level in Lake Shasta, the state’s largest reservoir, was 49% of average, according to state data.

What’s more, the latest U.S. Drought Monitor update, released Thursday, showed 31% of the state had slipped into the “extreme drought” category, up from about 27% one week prior.

Carlos Molina, a meteorologist with the National Weather Service in Hanford, said spring’s roaring temperatures typically don’t arrive until at least the end of April.

“So in a way, we’re kind of a month ahead of schedule,” he said.

Record warmth is expected Wednesday through Friday in most of the San Joaquin Valley, Molina said.

The combination of unusually early heat and deepening dryness has spurred significant concern from state water officials, who last week announced that State Water Project allocations would be slashed to 5% from an already meager 15%.

The announcement came on the heels of new data that found that Californians were significantly backsliding in efforts to save water, despite pleas from Gov. Gavin Newsom to voluntarily reduce use by 15%.

On Monday, the State Water Resources Control Board issued a “dry year letter” warning the state’s rights holders and claimants that more curtailments are likely should dry conditions continue or worsen.

Though spring outlooks issued by the National Oceanic and Atmospheric Administration last week predict the drought will expand, with warmer conditions across the West, officials said at least a bit of moisture may arrive in the coming week.

“We have a chance of rain coming somewhere between Sunday and Tuesday,” Sweet said, noting that the highest chance is probably on Monday. “We’re hoping for some rain then.”

Possible rainfall amounts for the L.A. region range from .25 to 1.25 inches, forecasters said.