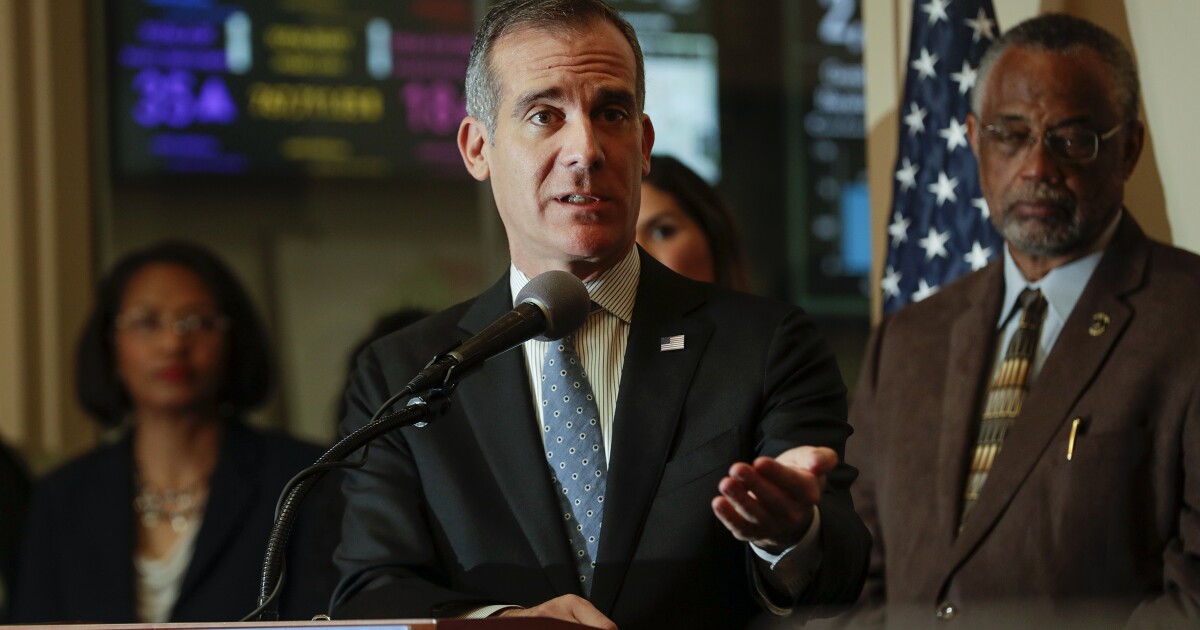 The report, which is marked confidential by the city through a court order, was given in November to the Senate committee that reviewed Garcetti’s nomination by President Biden as U.S. ambassador to India, Garcetti spokesman Alex Comisar said.

The panel approved Garcetti in January for the position.

The report is now being sought by Sen. Charles E. Grassley (R-Iowa) in his investigation into whether Garcetti was aware of allegations of sexual misconduct by former aide Rick Jacobs.

“It exists and we want to see it,” a Grassley aide said Wednesday of the report. “It would help us better understand the extent to which these matters were investigated.”

The city hired outside investigator Leslie Ellis to produce the report after LAPD Officer Matthew Garza sued the city in 2020, alleging he was sexually harassed by Jacobs. The report cost nearly $100,000 in taxpayer funds.

Under the protective order signed by the judge in the Garza case, the city can designate documents as confidential. Access to the confidential documents is limited to a group that includes the court, parties to the case and any other person that the designating party agrees to in writing, according to the order.

Garcetti, in remarks at a Nov. 17, 2021, news briefing, characterized the report as independent.

“I wanted to make sure there was no political oversight from this office of that and that [it] was a truly independent investigation,” Garcetti said. “But I understand they’ve completed it. They’ve talked to dozens of folks and had a decent outcome on that, but that is not under my control. I haven’t looked at it myself.”

The next day, a Garcetti spokesman said that the mayor had been briefed on the report’s findings.

Some former Garcetti aides who testified in depositions in the Garza case declined to be interviewed by Ellis. A spokesman for Naomi Seligman, one former aide, said she did not participate, because “based on what she’d seen of earlier investigations [she] didn’t have confidence it would be a complete and honest report.”

Garza was interviewed, but “we don’t lend any credibility to the report,” said his attorney, Greg Smith. He said there are no direct witness statements or recordings in the report.

The report was given to the panel under an agreement that senators keep the findings confidential, Comisar said Thursday. The mayor’s office gave the report to a contact at the State Department, who provided it to the Senate Foreign Relations Committee, he said.

A White House spokesman didn’t respond when asked if the White House had received a copy of the report.

A source close to the Senate Foreign Relations Committee confirmed the panel received the Ellis report from the State Department.

A city-ordered report involving allegations of harassment against then-City Councilman Jose Huizar in 2013 was not made public because Huizar was a city employee and employee matters are considered confidential, a representative in the city’s personnel department said at the time.

If the Ellis report deals with confidential personnel matters, then it should not be made public, said Jessica Levinson, a professor at Loyola Law School.

Garza’s attorney provided a document to The Times showing that Garza was sent a letter in September 2020 from the city clerk’s office instructing him to participate in the interview with Ellis. The letter warned Garza that he faced possible termination if he didn’t cooperate.

Wilcox, the spokesman for the city, didn’t respond to a question about what role, if any, the city clerk and personnel department played in the report.

Grassley, the top-ranking Republican on the Senate Judiciary Committee, announced last week that he has put a hold on the Senate vote for Garcetti’s nomination.

Garcetti has testified that he didn’t witness any misconduct, nor was he told of any. Jacobs has denied harassing anyone.

Grassley, in a statement last week, referred to the Ellis report. The review “reportedly found no wrongdoing by the mayor or his staff. However, information provided by multiple whistleblowers strongly suggests that this investigation was incomplete at best,” Grassley said.

In his lawsuit against the city, Garza alleges that Jacobs harassed him over a period of several years and that the mayor witnessed the behavior but didn’t intervene. In some instance, Garcetti joked at Jacobs’ crude remarks, the lawsuit alleges, which the mayor has denied.

Jen Psaki, White House press secretary, told reporters Wednesday that Grassley “can convey his opposition as is the right of any senator,” but can’t stop a floor vote.

Garcetti’s office released a statement Thursday noting the mayor “supports the release of this independent report, so that the public can see its conclusions.”