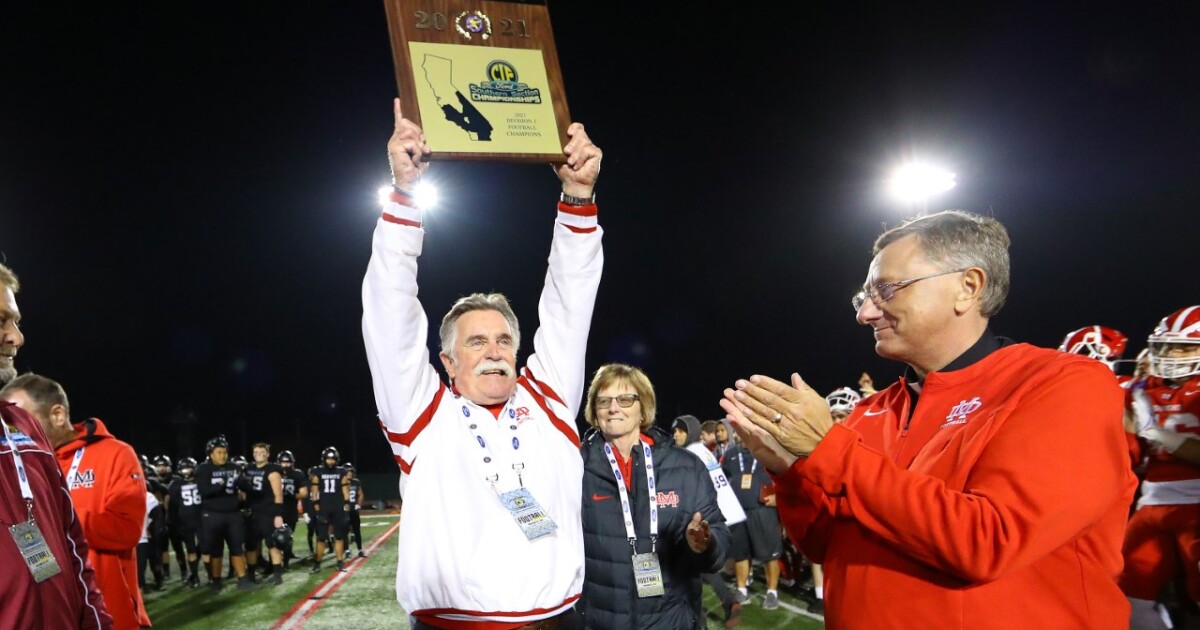 Pete Hardin, a former federal prosecutor, questioned on Wednesday why Dist. Atty. Todd Spitzer had not followed a local police department’s recommendation to file felony charges in the aftermath of a violent locker-room fight that, according to a recently filed lawsuit, left a teenage football player with a traumatic brain injury.

Hardin also criticized what he described as a “lack of any investigation” into longtime head coach Bruce Rollinson on suspicion of child endangerment. One of the best-known figures in high school football, Rollinson has been profiled in Sports Illustrated and has led the team from Santa Ana to eight Southern Section championships and four national titles since 1988.

“These kids were under his care,” Hardin told The Times. “As the head coach of the team, he apparently knew that there was a ritualistic hazing process that these kids went through and did nothing to stop it.”

In a case like this, parents understandably want answers quickly, said Laurie Levenson, a former federal prosecutor who teaches law at Loyola Marymount University. But, she said, “it’s the kind of case where you have to be very careful with both the investigation and the charging decision.”

Spitzer said Tuesday that his office had not filed criminal charges because there was “no evidence of hazing or any other crime that we can prove beyond a reasonable doubt.”

The office’s most experienced prosecutors had reviewed the case, Spitzer said, and had not found “a single shred of evidence to show that this was anything other than a mutual combat situation with two willing participants who traded blow for blow, including repeated punches to each other’s heads.”

“At no time did one of the players in the fight tell the other player to stop, even when the punches became head shots and attempted head shots,” Spitzer said. He said that he is open to reviewing new evidence, and that if it can be proved that “anyone — whether a player, a coach or a school administrator — has engaged in or condoned hazing, I will hold them accountable.”

The family of the former football player sued Mater Dei and the Roman Catholic Diocese of Orange last week, alleging negligence, violation of California’s anti-hazing laws, failure to properly protect the student and infliction of emotional distress. The complaint, filed in Orange County Superior Court, described a “rigorous, cutthroat” attitude at an institution that “protects its storied athletic reputation at all costs.”

The student’s injury stemmed from a Feb. 4 bout of “Bodies,” in which two players square off and punch each other on the torso until one player “can’t take it anymore and gives up,” the lawsuit said.

The student, a junior who joined the team the previous fall, agreed to participate in an “effort to fit in and show he was tough enough,” according to the complaint.

When an athletic trainer examined his injuries, the student said he hit his face on a sink, the lawsuit said. The complaint alleges the trainer didn’t call for medical assistance and didn’t contact the plaintiff’s parents for 90 minutes. The student was later diagnosed with a broken nose that required surgery and a traumatic brain injury that left him with slurred speech and cognitive dysfunction.

Hardin questioned whether the fight could reasonably be classified as “mutual combat” and said that what started as a hazing ritual “at some point became something else.” Video evidence of the fight has not been released to the public.

Hardin also questioned whether Spitzer’s office adequately considered charging the crime of hazing. Since 2006, California has allowed for felony prosecutions when serious injuries or deaths result from hazing rites.

He cited a conversation quoted in the lawsuit between Rollinson and the student’s father the day after the fight, in which Rollinson is quoted as saying: “If I had a hundred dollars for every time these kids played Bodies or Slappies, I’d be a millionaire.” He did not respond to a request seeking comment.

Spitzer’s office will look at “any and all evidence to determine if they can prove a crime was committed beyond a reasonable doubt,” said Tim Lineberger, a spokesman for Spitzer’s reelection campaign. “We’re glad Mr. Hardin is parroting that sentiment.”

Mike Reck, an attorney for the student’s family, said the family is not calling for “another child to be prosecuted.” The goal, he said, is to hold Mater Dei and the diocese accountable for any wrongdoing.

Mater Dei’s president, Father Walter Jenkins, said in a letter to parents and students Tuesday that the school will hire an “outside and independent firm” to investigate safety practices in student athletics. Jenkins, who was hired in July, said he would also establish a task force of athletics industry employees in the spring semester to review how the school’s athletic programs are structured.

“My ability to be transparent as we address our present challenges and concerns will only be limited by legal constraints for the privacy of minors and employees,” Jenkins wrote.