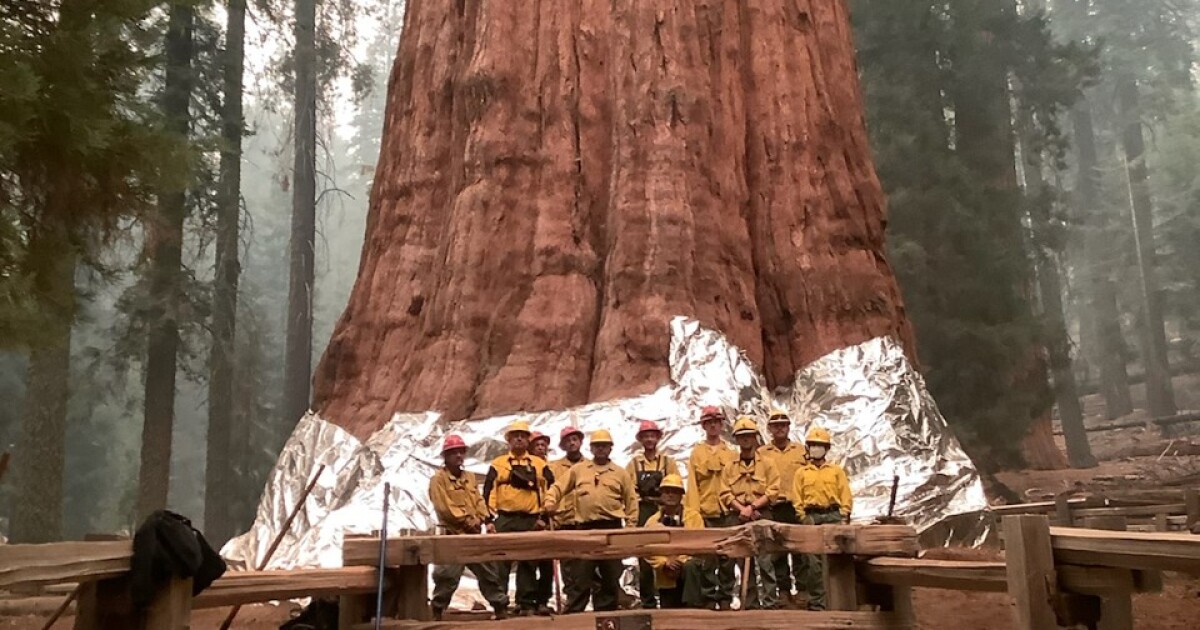 Firefighters battling a major wildfire in Sequoia National Park had some good news to report on Sunday: General Sherman — the giant sequoia and one of the largest living trees in the world — is still standing.

The 21,777-acre lighting-sparked wildfire — dubbed the KNP Complex fire after the Colony and Paradise fires merged into one — grew by more than 3,900 acres overnight, but officials said Sunday that hundreds of firefighters have valiantly kept key areas of the forest under control. The park is east of Fresno.

In an upbeat report Sunday, fire officials said they were feeling fairly confident about protecting the Giant Forest, home to thousands of towering sequoias. Numerous well-established walking trails meander through this iconic part of the park, so firefighters have been able to move around and work from multiple locations.

In addition, the museum and all the infrastructure around the General Sherman tree are equipped with sprinklers, which firefighters have been running nonstop to ensure that the area stays wet. The ancient sequoia, a major tourist draw for the park, is 275 feet tall and over 2,000 years old. It is considered the largest known tree in the world by volume.

“All the protections in the Giant Forest are going really well,” Jon Wallace, the Southern Area Blue Team’s operations sections chief, said in an update Sunday as he went over the latest infrared fire maps. “Firefighters are really working hard up in there to contain that fire.”

But there are still reasons for concern. Wallace noted some strong gusty winds starting to come in. Critical fire weather conditions are expected to persist through Sunday evening, with a red-flag warning issued by the National Weather Service in effect until 8 p.m. Forecasters have cautioned that a confluence of factors — very low relative humidity levels and strong winds gusting as high as 45 mph — could lead to extreme fire behavior.

“Firefighters are going to stay busy in here again today,” Wallace said, “making sure everything stays safe, making sure that General Sherman doesn’t catch on fire.”

Officials were forced to scramble last week — with an urgent call on Saturday for more resources — after the fire swelled and burned through the westernmost tip of the Giant Forest near the Four Guardsmen, a grouping of giant sequoias that marks the forest’s entrance. Crews had been working for the past week to prepare the ancient sequoias by wrapping them in aluminum-foil-like material and raking vegetation from around their bases.

Then the wind picked up Friday afternoon and a smoke inversion lifted, allowing the sun to heat up the vegetation. Firefighters had to be pulled out for safety reasons.

They were able to get back into the area later Saturday after General’s Highway — the only way in and out of the forest — was cleared of falling rocks and flaming vegetation that had rolled onto the road.

There are still a lot of trees falling across the highway, Wallace said Sunday, but professional timber cutters have been called in to help keep that road open for firefighting operations.

More than 600 firefighting personnel are now fighting the KNP Complex, including 21 crews, 21 engines and eight helicopters. The fire remains 0% contained.

Officials noted that most of this fire growth has been moving north, near the Red Fir area. Firefighters have spent the last day preparing all the structures in that area for any flames that may arrive.

“Those firefighters are on high alert for spot fires into that campground,” Wallace said. “They’re ready to defend those structures when that fire begins to impact the area in the next day or so.”

Wallace noted that the northwest wind that was starting to move in Sunday will at least help the crews working on the other end of the KNP Complex fire — along Paradise Ridge. A team of dozer and hot shot crews, aided by helicopters and air tankers, have been establishing hand lines to protect the cabin community of Three Rivers, where about 100 homes have been threatened.

“So that’s an extra layer of defense now, between the fire edge and Three Rivers,” Wallace said. “Even though there’s a red-flag warning today, these northwest winds are really going to be favorable for us in moving the fire away from the community.

“We’ve got a real good opportunity for the next several days to get in here and get these lines completed — and be ready to defend them,” he said, “in case the winds do switch around.”