No problems reported as anti-vaccine protesters gather in L.A. 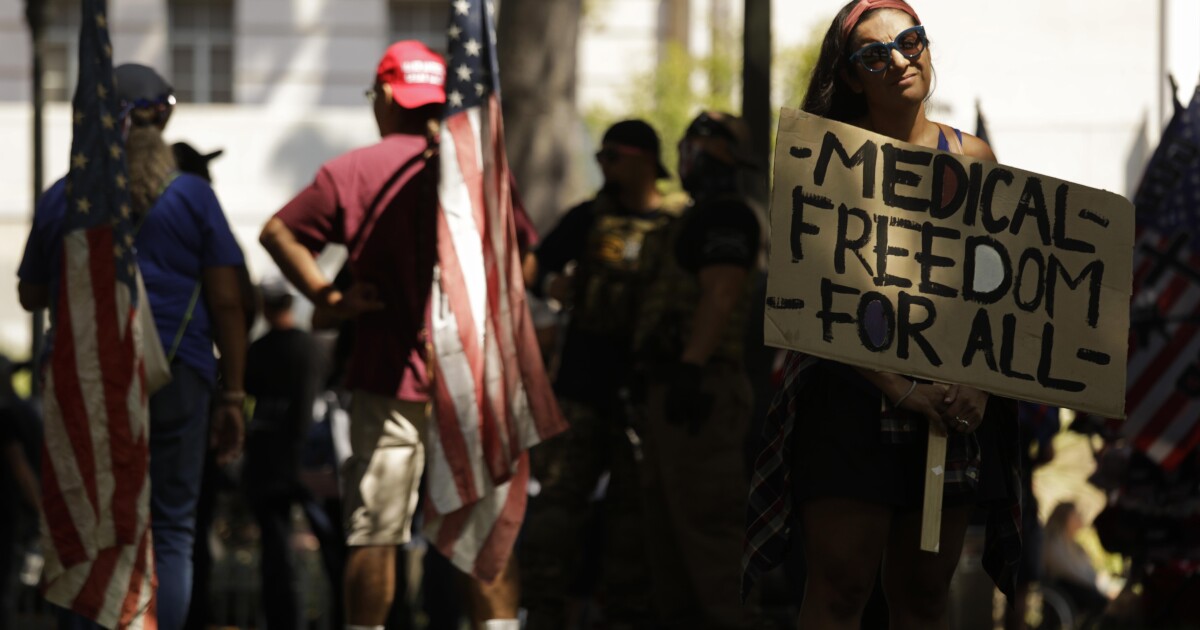 Dozens of anti-vaccination protesters gathered for a rally Saturday in front of Los Angeles City Hall, but unlike previous gatherings no counter-demonstrators turned out and things remained mostly peaceful.

Some of those attending the “World Wide Rally for Freedom” carried American flags and signs that read “COVID 1984,” “Informed Dissent,” “I’m Not A Lab Rat” and “Forced Penetrations Are Always Wrong.” The crowd numbered about 200.

Several speakers alternately recited psalms, praised members of the Los Angeles police and fire departments for refusing to submit to vaccine mandates, and urged demonstrators to persevere in their resistance to vaccines “no matter what names they call us.”

One woman, who was introduced as a doctor, told the crowd: “If you silence your voices, you are giving your power away to the authorities who pretend they have your best interest in mind.” She urged the crowd to recognize what she described as “tyranny” masquerading as public health protections.

At one point a caravan of cars pulled to the curb across the street from the demonstration, with signs taped to their sides that read, “Fascists out of LA.” A group of demonstrators ran across the street to confront them, middle fingers extended, but the cars drove off before the confrontation escalated further.

About 10 LAPD officers stood watch over the demonstrators from across the street.

Health experts have said the COVID-19 vaccines are safe, effective and save lives. Data released by Los Angeles County last month showed that hospitals are seeing a greater number of unvaccinated people who are younger and otherwise healthy. Currently 67% of L.A. County residents are at least partially vaccinated, according to a Times analysis.

Protests over vaccinations and other regulations intended to limit the spread of COVID-19 have been widespread through the pandemic, at times leading to physical altercations among attendees. Last month, a man was stabbed and a reporter was assaulted during a melee at an anti-vaccination rally in downtown Los Angeles.

Some have remained peaceful, including a rally at the Santa Monica Pier two weeks later that drew hundreds of anti-vaccination demonstrators. Anti-mask protesters have also converged near the Huntington Beach Pier in recent months.

In January, a group of anti-vaccine protesters disrupted operations at a mass COVID-19 vaccination center at Dodger Stadium, prompting some officials to call for more security at testing and vaccination sites.

There is no blanket rule mandating that people get vaccinated in California, but some cities have or are considering requiring proof of vaccination to enter certain businesses.

Friday, Los Angeles County issued a new mandate requiring indoor bars, wineries, breweries, nightclub and lounges in much of the county to require proof of COVID-19 vaccination. The mandate requires staff and patrons to have at least one vaccine dose by Oct. 7 and be fully vaccinated by Nov. 4.

Also, the county will soon require proof of COVID-19 vaccination or a recent negative coronavirus test to enter Dodger and SoFi stadiums as well as Major League soccer venues for events with more than 10,000 people.

In July, the county reinstituted a rule requiring people to wear masks in indoor public spaces amid a surge in new coronavirus infections fueled by the highly transmissible Delta variant.

Newsom California recall race was tight in Fresno and Merced