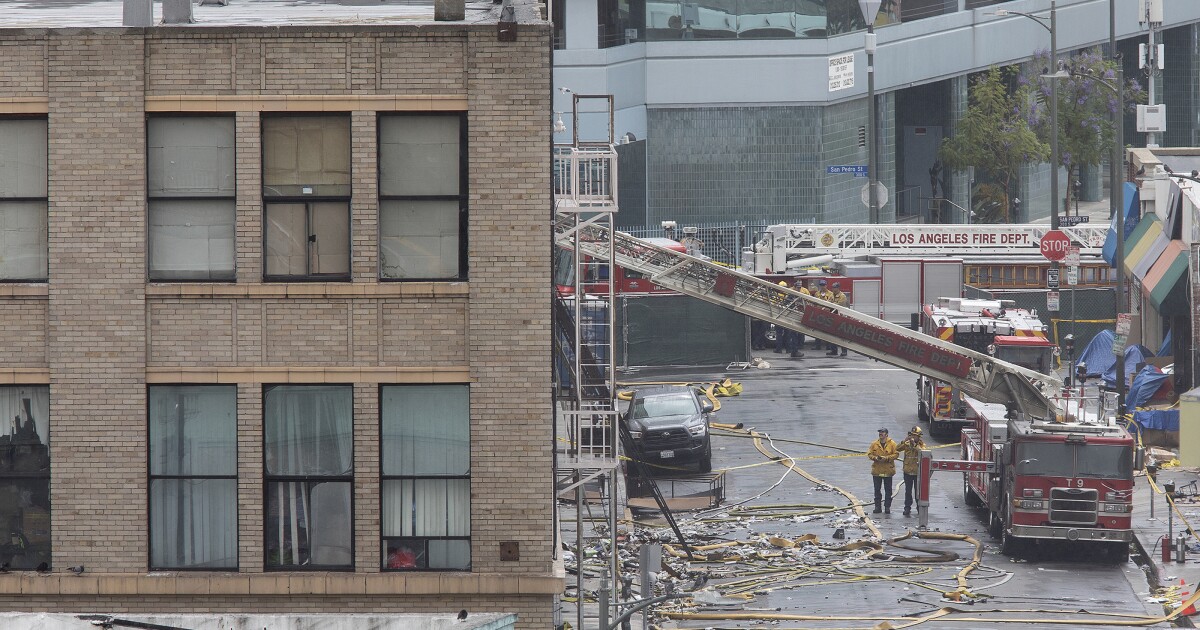 A Los Angeles Fire Department captain severely burned in a May 2020 explosion inside a downtown L.A. warehouse has sued the owners of the building and a vaping supply shop housed there, accusing them of hazardous activity, premise liability and negligence.

Victor Aguirre and his wife, Claudia Aguirre, filed suit Wednesday in Los Angeles County Superior Court against property owner Steve Sungho Lee and his various companies along with the operators of Green Buddha and Smoke Tokes, a smoke and vape shop inside the East 3rd Street warehouse where the explosion occurred. Twelve firefighters were injured.

After a criminal investigation by the federal Bureau of Alcohol, Tobacco, Firearms and Explosives and the Los Angeles Police Department, they were charged with more than 300 criminal counts.

The lawsuit claims Victor Aguirre, a 20-year veteran of the Fire Department and father of two, suffered catastrophic injuries in the explosion, including severe burns over much of his body and “devastating third-degree burns” to his hands. The burns resulted in so much damage that each of his fingers had to be partially amputated, and he has undergone 25 surgeries since. He was hospitalized for two months and has been able to return to the Fire Department in an administrative capacity.

Aguirre, according to the suit, has been permanently disfigured, disabled and left with a lifetime of pain and suffering. The suit accuses the warehouse owner and operators of the vape shops of violating the law, storing large quantities of hazardous materials in an illegal and unsafe manner, maintaining them in an “ultrahazardous condition” and negligently summoning Aguirre and other firefighters to the scene.

The business owners “negligently stored an explosive mix of hazardous materials. They are to blame for the horrific injuries Mr. Aguirre and the other 11 firefighters suffered,” said attorney Patrick Gunning, who represents the Aguirres.

The blast happened in a section of downtown nicknamed “bong row” because of the concentration of retailers selling rolling papers, butane and other supplies associated with vaping, tobacco and the extraction of THC for marijuana vape cartridges. Those in the legal cannabis industry say many of the stores on 3rd, Boyd and Wall streets supply butane and other items in bulk to unlicensed cannabis distributors.

In a report, the Fire Department determined the “excessive quantity” of nitrous oxide and butane containers inside Smoke Tokes fueled the fire, which damaged several other properties. The report also revealed that the LAFD had failed to inspect the building for at least a year before the blast. Fire Chief Ralph Terrazas has acknowledged that an inspection probably would have resulted in the seizure of many of the materials that fed the explosion.

In the lawsuit, Gunning alleges firefighters believed they were fighting a “routine ventilation limited structure fire” but moments after entering heard a “popcorn-like” noise that rapidly escalated before a “jet-like rumble.” Aguirre, who was on top of the roof, was last off the building; the enormous explosion engulfed him and other firefighters as they scrambled onto the aerial ladder of a firetruck.

Video and still images captured Aguirre engulfed in flames as he headed down the ladder after the explosion.

None of defendants named in the suit could be reached for comment.

In November, the owners of two smoking and vaping supply stores struck plea deals with prosecutors that call for their businesses to pay more than $100,000 to the city.

As part of the agreement with the Los Angeles city attorney’s office, Smoke Tokes and Green Buddha must pay the Los Angeles Fire Department about $127,000 to compensate the agency for the investigation.

In addition, Raheel Lakhany and Shafaq Sattar, who each owned one of the businesses, agreed to cease operating at the location of the fire. Their businesses pleaded no contest to four municipal code violations involving the improper storage of flammable materials and other fire code violations.

Criminal charges against Lakhany and Sattar were dismissed as part of the deal.

California GOP should give up win-quick schemes after recall