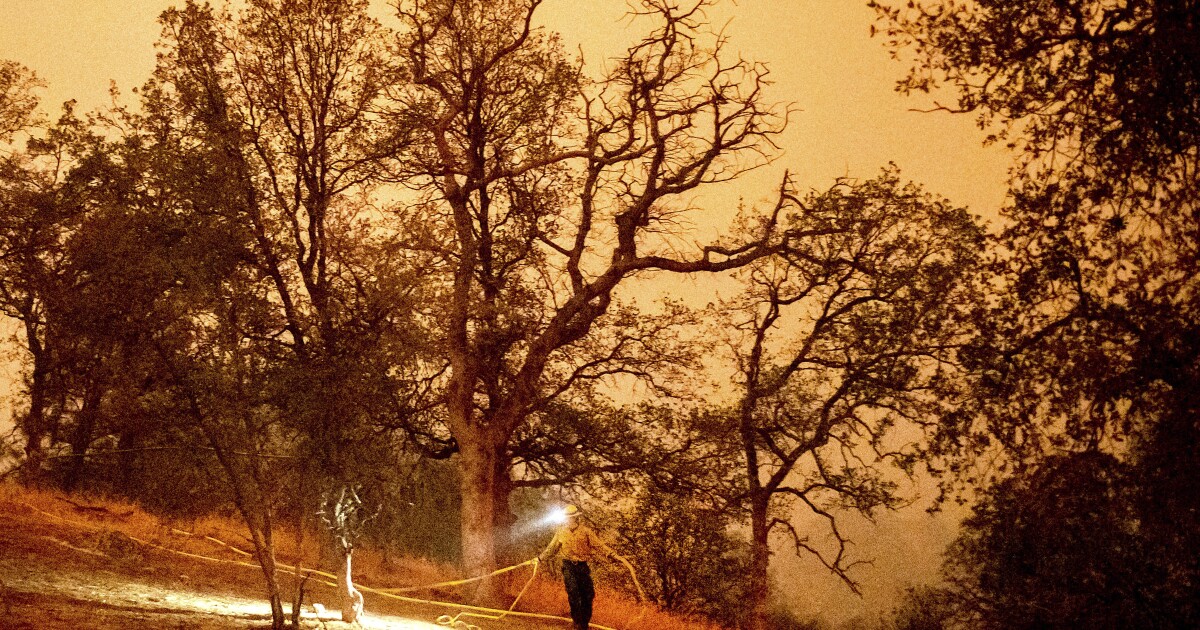 Deep inside the heart of Sequoia National Park lies a cathedral-like grove that is home to thousands of towering sequoia trees. Known as the Giant Forest, it draws throngs of visitors each year who come to marvel at its behemoths, including the 275-foot General Sherman tree, known as the largest tree on Earth.

Wildfire is a natural part of the life cycle of sequoias — helping to release their seeds. But with climate change fueling a new breed of extreme fire in California, that ecological contract has been betrayed. Flames from a wildfire are lapping at the Giant Forest and threatening to decimate some of the greatest natural wonders of the world.

The 8,940-acre KNP Complex, composed of the Paradise and Colony fires, was roughly a mile from the ancient grove Wednesday, officials said.

The new fire underscores the growing danger that faster, more intense fires pose to the sequoias. The 2020 Castle fire wiped out 10% of their population, leaving behind a graveyard of charred trunks and scorched crowns.

Experts fear the latest conflagration could be catastrophic for the already endangered giant trees, which for many years were believed to be nearly impervious to fire.

“In a climatological sense, we are in uncharted territory,” said Crystal Kolden, a fire scientist at UC Merced who has been tracking the KNP Complex’s march toward the critically dry forest. “It’s just really not the type of conditions that you want to see fire burn under.”

Among the chief concerns are the record heat and devastating drought that have plagued California this summer, sapping water from the trees and impairing their defenses, Kolden said. The vapor pressure deficit, a metric that indicates how intensely a fire can burn, is also at record high levels.

It is a recipe for yet another crisis in a year of crises for warming Western forests, which are burning at a pace and scale unmatched in recent history. Already, more than 2.25 million acres have burned across California this year. The lighting-sparked KNP Complex, which ignited Sept. 10, is still 0% contained.

But Kolden and other experts said there is a glimmer of hope. Using methods such as long-term prescribed burn projects and recent park closures, forest officials have been preparing for the possibility of this scenario, and what happens in the hours and days to come will put that work to the test.

Many of the sequoias’ lowest branches are more than 100 feet off the ground, Kolden said, and fire crews are banking on flames staying nearer to the forest floor, where they can’t catch and climb to the crowns of the trees.

“At this point, it’s a lot of ‘wait and see’ to see if the conditions emerge that would be catastrophic,” she said, or if all that work “does what they meant it to do — which is protect that grove and allow the fire to burn naturally through.”

Mark Ruggiero, a spokesman for the Sequoia and Kings Canyon national parks, said firefighters on Wednesday were on high alert, stationed strategically to monitor the groves.

“We have a lot of crews up there … and we’re watching closely,” he said.

The fire has already prompted park workers and nearby residents to evacuate, leaving only the crews and the trees to face the advancing flames. Historically, giant sequoias have been armored against fire — even dependent on it, said Robert York, an adjunct professor of forestry at UC Berkeley who has been studying the rare species for 18 years.

Giant sequoias, found only in California and primarily in the southern Sierra Nevada, need fire to reproduce. They’re especially adapted to “a certain type of fire — that being a low-severity fire,” York said.

Encapsulated by a thick, protective bark, with towering canopies that tend to extend far from flames, the trees are physically adapted to survive fire. Fire heats their cones and prompts them to open, releasing copious seeds on an ash substrate created by the fire that’s ideal for germination.

It’s estimated that each enormous tree has 13,000 cones and that each of those cones contains 200 seeds, equating to roughly 2.6 millions seeds per tree.

Often when a fire occurs, it’s recorded as a scar within the tree, York said. Because sequoias can live for more than 3,000 years, examinations of trees have revealed long, detailed records showing that the trees historically experienced fires once every 10 years on average.

“Their strategy is to keep surviving through all of these fires and eventually have a lot of success” in reproduction, York said.

Not every fire results in a successful new crop. Conditions, including drought, can stymie reproduction. And now there are unknowns as climate change alters the frequency, severity and seasonality of fire.

“In my mind, the really important question is: Are these trees adapted to the new fire regime and the new climate?” York said. “And, arguably, they are not adapted to a high-severity fire regime.”

Indeed, many of the fearsome blazes in California this year have not burned at low intensity. Fueled by strong winds and dry vegetation, the fires have released extreme amounts of energy.

Still, officials have championed prescribed burns for successfully clearing much of the understory and overgrowth that can act as fuel for the fires — crediting the work with protecting the Giant Forest from the 150,000-acre Rough fire in 2015.

Still, devastation would not be without precedent, as the Castle fire proved last year.

What’s more, firefighters on the KNP Complex are battling challenging topography. Though the Giant Forest sits on something like a plateau, the nearby area where the fire is burning is steep, rocky and replete with drainages, making it difficult for crews to get ahead of the flames, officials said.

Resources are also spread thin, as the nearby Windy fire, just south of the KNP Complex, has grown to more than 2,500 acres with no containment. It has crept into a sequoia grove, although officials have not yet been able to get close enough to assess any damage.

During a community meeting Tuesday night, Sequoia and Kings Canyon national parks Supt. Clay Jordan called the KNP Complex a “very high priority” and said federal and state resources had been assigned to the blaze.

“I will advise you upfront that the fire behavior we’ve been seeing across the West, with this period of drought, has made these fires less predictable,” Jordan said. “When we talk about crystal balls — what’s the fire going to do? — that’s a really tough question for us to answer.”

Some residents and champions of the massive trees said they will be watching anxiously to see what the fire will do in the days to come. Outdoors enthusiast Erin Greeson of Pasadena used to make a point of visiting the Mariposa Grove of giant sequoias during frequent visits to Yosemite.

She described the sequoias, along with similarly towering redwoods, as “sacred.”

The 44-year-old has been too shaken to return to the grove since a windstorm this year knocked down at least 15 of the stately trees — and she has been rattled by reports that wildfires are threatening more of the giants.

“There’s been a lot of sad news in our world lately, and I don’t think I can take seeing numerous of the big trees fallen right now,” said Greeson, who works for a nonprofit that supports front-line healthcare workers.
She hopes people in the community will come together and take steps to reduce the risk of catastrophic wildfires, including addressing climate change and respecting forest closures.

Kolden, of UC Merced, said that if any of the giant sequoia trees burn, it would be yet another “casualty of climate change.”

“A lot of these trees are over 3,000 years old, and that’s a long history to lose,” Kolden said. “How can you be Sequoia National Park if you don’t have any sequoia left?”