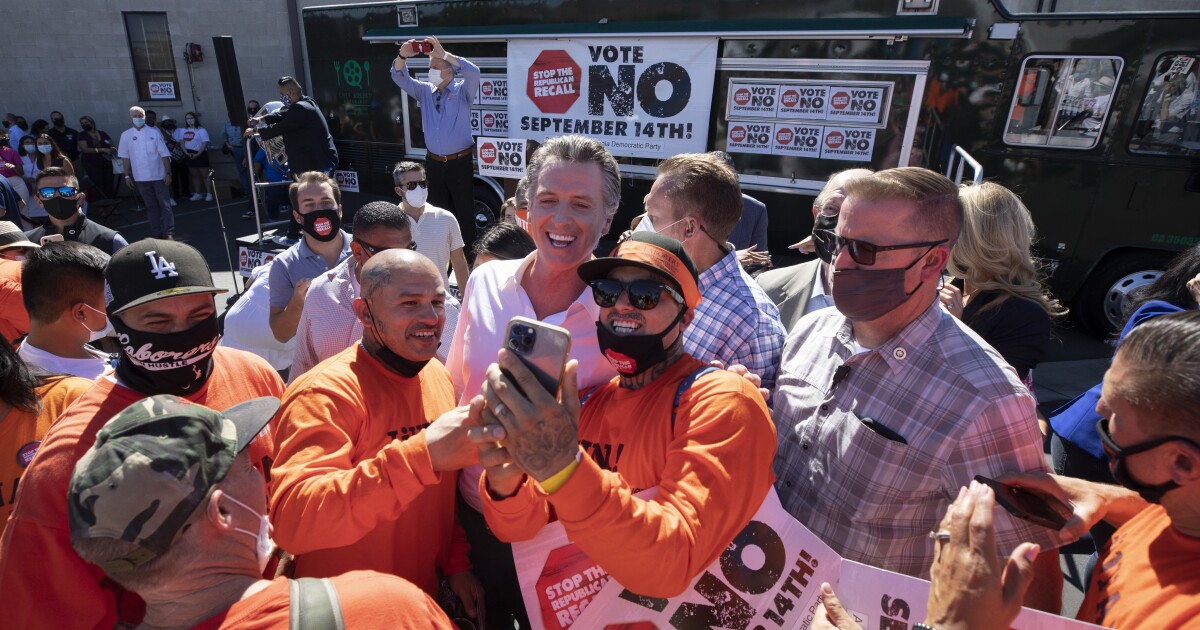 The governor spoke to a couple of hundred people in Sun Valley — hoping to shore up support with the region’s large Latino population — while Elder held a news conference in Brentwood.

In Sun Valley, the crowd’s dueling chants overtook Newsom as he wrapped up the rally in the parking lot of Chef Robert Catering: “Vote no!” they cheered. “Si, se puede!”

“The dream in California is still alive and well. But I also want to remind you the dream is on the ballot,” Newsom told the crowd. “I know my name appears on the ballot, but if they land their airplane of hate, if they’re successful with this recall, I assure you our progress on racial justice, social justice, economic justice, environmental justice will be set back.”

Newsom reinforced his campaign message, touting his track record as governor and pinning the race as a Republican-led effort that could devastate the state. A cadre of local, state and federal leaders including U.S. Sen. Alex Padilla, California Democratic Party Chairman Rusty Hicks and Los Angeles City Council President Nury Martinez joined him in urging attendees to vote and repeatedly labeling the election the “Republican recall.”

Newsom took aim at Elder, as well as Orrin Heatlie, an organizer of the recall effort. He pointed to Elder’s statement that an argument could be made to owe reparations to slave owners’ descendants as well as to Black people, and he highlighted Heatlie’s previous Facebook comment to “microchip all illegal aliens.” Heatlie later dismissed the comment as “hyperbole,” not to be taken literally.

“You can’t make this stuff up,” Newsom said Sunday. “The consequences of this race are profound and pronounced. The xenophobia, the nativism, the hatred, the rank racism that is behind this.”

A poll released Friday by the UC Berkeley Institute of Governmental Studies and cosponsored by The Times showed that 67% of Latino voters reject the recall effort. At 39% of the population, Latinos are the largest ethnic group in California and a crucial part of the electorate.

Sporting a Dodgers mask, Ernesto Pantoja, government affairs specialist for Local 300 of the Laborers International Union of North America, praised the governor for keeping the construction industry’s many laborers working during the pandemic, allowing them to contribute to the economy in their communities and to their families.

Pantoja, 41, said he would vote against the recall because Republicans “are not representative of who we are.”

“They don’t care about me as a Latino, period,” said Pantoja, who is of Mexican descent. “Where my people come from, what we’ve gone through, I don’t want those people representing me.”

Elder held a news conference Sunday afternoon in Brentwood with feminist, writer and former actress Rose McGowan. In recent days, McGowan had claimed that Newsom’s wife, Jennifer Siebel Newsom, asked her to cooperate with Harvey Weinstein’s attorney at a time when McGowan was considering coming forward with sexual misconduct allegations against the Hollywood mogul.

McGowan said that in 2017, feminist group UltraViolet contacted her and said Newsom’s wife might be able to help her address some of her concerns related to Weinstein.

McGowan, who eventually accused Weinstein of rape, was considering at that time coming forward with the allegation, which then remained confidential.

McGowan said she had a brief phone call with Siebel Newsom, who she said asked her: “What will it take? What can Boies Schiller do to make you happy?”

She said she had not heard of Boies or the firm, “so I just said nothing and I hung up on her.”

McGowan said she believed the call amounted to an attempt by the wife of Newsom, who was then lieutenant governor, to “suppress” her and her accusations against Weinstein.

The Elder campaign also presented an email that Siebel Newsom apparently sent in late 2017 defending herself against the notion that she was siding with Weinstein and his attorney.

In the email, she acknowledges asking McGowan “what if anything Boies could do for her that would help her to heal.” She said McGowan rejected the overture. Siebel Newsom insisted in the 2017 email that the idea she wanted to help Weinstein was “completely absurd,” suggesting that the “unresolved trauma” of some victims had made her a scapegoat.

“What is being alleged is a complete fabrication,” a spokesperson for Siebel Newsom said in a statement. “Their limited correspondence has been strictly as fellow survivors of sexual assault and in Jennifer’s former capacity leading the Representation Project, an organization that fights limiting gender stereotypes and norms.”

Immediately after the New York Times broke the news of sexual misconduct allegations against Weinstein in October 2017, Siebel Newsom wrote a column saying that she believed the accusers and that she had her own run-in with Weinstein.

“The entire engine of Harvey Weinstein’s business and legal machines seem to have been working overtime to silence decades and dozens of accusations,” Siebel Newsom wrote in HuffPost.

Elder did not say how the accusations against Newsom’s wife related to the governor.

Newsom called the allegations “outrageous and false.” He also reiterated a string of his opponent’s positions that he said were bad for women.

Elder also touched on other topics in the news conference, including school choice, Barack and Michelle Obama’s alleged lack of support for public education, and what he called Democrats’ false belief that Donald Trump stole the 2016 election. He focused much of his wrath on the media.

“If someone has said my significant other … had called Rose McGowan and said, ‘What can we do to make you go away? What can we do to make this happy?’ that’s all you guys would be talking about between now and the end of my campaign. This is a double standard to which I’ve been subjected my entire time. And I’m sick of it and you ought to be sick of it.”

Larry Elder and the danger of the 'model minority' candidate