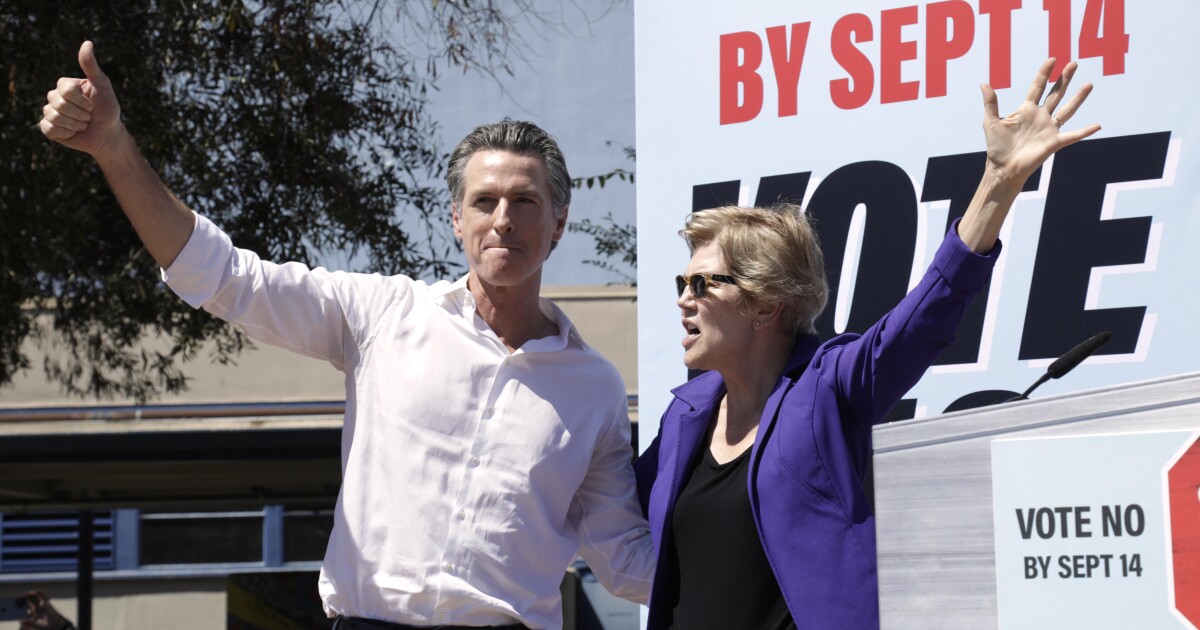 In a sprint to the finish, Gov. Gavin Newsom and his challengers campaigned across the state over Labor Day weekend, with just days to go before the Sept. 14 recall election.

Former San Diego Mayor Kevin Faulconer stopped by that city’s East Village Friday and went on local TV over the weekend to discuss how he would address the homelessness crisis if elected.

Newsom’s events continued to feature Democratic Party leaders. Over the weekend, he campaigned with Sen. Elizabeth Warren (D-Mass.) in Culver City and Sen. Amy Klobuchar (D-Minn.) in Santa Ana. The combination of senators, both former presidential candidates, is meant to appeal to a broad spectrum of the Democratic Party — Warren with the most left-leaning voters, and Klobuchar, a former prosecutor, with moderates. Showcasing two of the nation’s most powerful women in Congress also sends a signal to female voters, among whom Newsom enjoys strong support.

Bolstering that message, Vice President Kamala Harris is scheduled to join him Wednesday for a campaign rally in the Bay Area.

Newsom’s Labor Day event was held at the headquarters of the African American Voter Registration, Education and Participation Project, which works to register Black voters in the state.

“If we don’t vote no, Larry Elder is going to be sworn in in a matter of weeks,” Newsom warned supporters.

Meanwhile, in Castaic, Elder, the conservative talk radio host, made his case to oust the governor. He faulted Newsom for failing public schools, the worsening homelessness crisis and an increase in the cost of living.

“This is not a Republican takeover; this is a takeover from Californians who are absolutely fed up,” Elder said Monday. “I can’t think of a single front where we have been doing well. Great state — beautiful people, great natural resources. The only thing it needs is great leadership.”

On Sunday, Elder stood on top of the Oroville Dam with Rep. Doug LaMalfa (R-Richvale) and addressed the drought in California, charging that the Newsom administration is mismanaging the crisis. Later in the day, he held a rally in Durham, near Chico.

There are 46 recall challengers looking to replace Newsom. The first question California voters face in the Sept. 14 recall election is simple: Remove Newsom from office or keep him? The second question is where voters face a more complicated decision: whom to select, if anyone, from those vying to become governor if the recall succeeds.

Newsom, who enjoys a large fundraising advantage over his opponents, used that edge to stoke Democratic enthusiasm after a series of polls suggested that his fellow partisans were less engaged than Republicans and others who support the recall. More recent polls show that the governor has as much as a double-digit lead.

Newsom and his anti-recall allies have raised $72 million, more than double the pro-recall forces and GOP candidates combined, according to fundraising disclosure reports.