Restorative justice or justice denied? With D.A. Gascón, teens tried as adults get a second chance 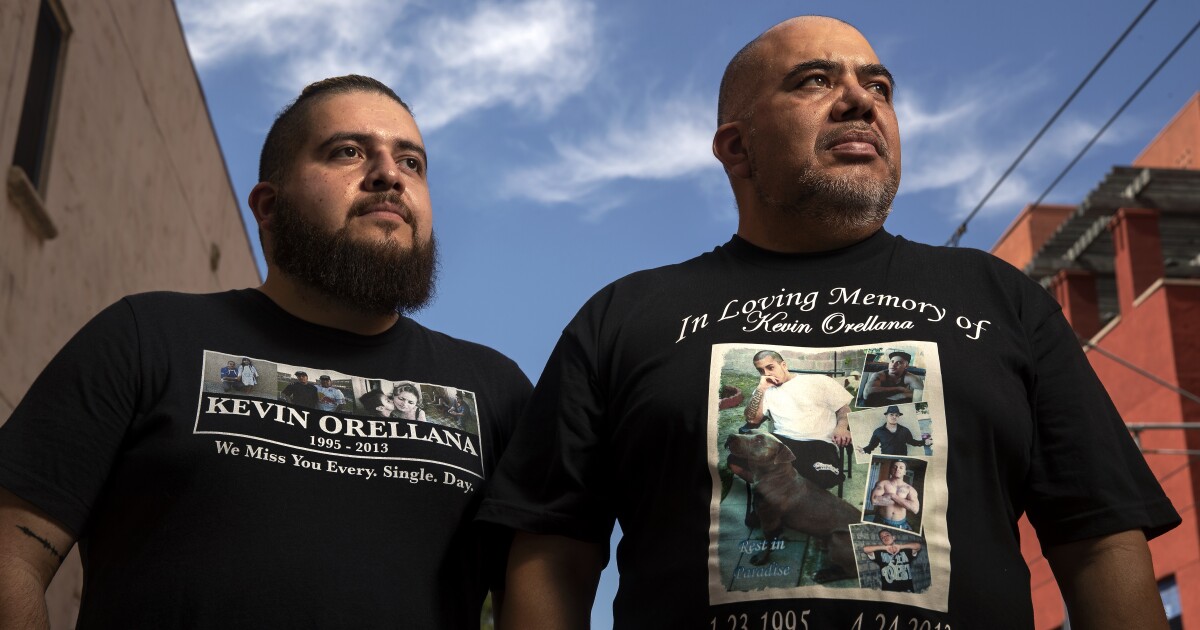 When he saw a Los Angeles police detective walking toward his mother’s doorstep this year, Guillermo Orellana feared the worst.

The sight called him back to 2013, when the same investigator pulled Orellana’s mother aside in a hospital room and delivered a grim message: his younger sibling, Kevin, had been stabbed to death by two brothers on a Reseda handball court in what police would term a gang-related killing.

Now the detective was telling the Orellana family that one of the brothers — a teen at the time of the murder — would probably be resentenced as a juvenile due to a combination of a change in California law and newly elected L.A. County Dist. Atty. George Gascón’s policy of refusing to try teens as adults. The defendant, who had been sentenced to 16 years to life in 2015, will now probably be released before 2022.

“They killed my brother. We’re not going to get him back,” Guillermo Orellana said. “Now it makes you feel like they’re doing it again.”

In 2016, California voters overwhelmingly passed Proposition 57, a sweeping criminal justice reform bill that barred prosecutors from trying juveniles as adults without a judge’s approval. That same law allowed previously convicted juvenile defendants whose cases were directly filed in adult court to retroactively seek what is known as a transfer hearing, in which prosecutors have to convince a judge the defendant should have been tried as an adult.

The law’s effects are gaining renewed scrutiny in the wake of Gascón’s election and his opposition to trying juveniles as adults, marking the latest tug of war between victim rights advocates and criminal justice reformers as Gascón tries to modernize the policies of the nation’s largest prosecutor’s office.

The case involving the Orellana family is one of 17 similar matters to fall under Gascón’s purview since he took office. His prosecutors have declined to seek transfer hearings in a dozen cases in which defendants were previously convicted of violent crimes as adults, officials said. In many of those cases, defendants have already seen their sentences drastically reduced or, in some cases, been immediately released.

Although families such as the Orellanas feel justice has been undone, the person reviewing such cases inside the district attorney’s office said she was seeking a fair outcome for both the victim and the accused.

Alisa Blair, a former public defender who serves as Gascón’s special advisor on juvenile cases, said the teen charged in Kevin Orellana’s death was remorseful and immediately confessed to police when he was arrested. Blair also said the teen’s older brother started the fight that led to the killing. The juvenile only got involved to defend him, said Blair, adding that the teen should never have been tried as an adult in the first place.

“It’s a tragic situation, but it completely lines up with adolescent behavior,” she said. “For him to receive a life sentence on facts that very arguably could have been defense of another is just not where we are in the state of the law, in the way that the state, and the country, are viewing juveniles.”

Though the situation is not identical to Gascón’s absolutist stance against trying juveniles as adults — Blair says there are at least two Proposition 57 cases in which she has either sought a transfer hearing or negotiated a plea deal in adult court — victims rights advocates remain furious.

“For the families that I have spoken to and been involved with, it has been really devastating. They are very angry at Gascón. They don’t understand why the district attorney’s office is not trying to protect them,” said Kathy Cady, a victims rights advocate representing half a dozen families in similar cases, including the Orellanas. “They feel like they’ve been sucker punched.”

But Gascón‘s and Blair’s thinking is largely in line with evolving views on juvenile justice nationwide. When Proposition 57 passed, it did so by nearly 4 million votes statewide. This year, the California Supreme Court ruled that defendants younger than 16 could not be tried as adults, slapping down a challenge brought by prosecutors in Ventura County and a pro-death-penalty legal group.

Only 25 juveniles were transferred to adult court last year throughout California, down from 158 in 2017, according to data tracked by the state attorney general’s office. In 2016, the last year prosecutors could file charges against juveniles directly in adult court, 340 teens faced that fate, records show.

But academic studies and data are often cold comfort to those directly affected by cases of extreme violence. In most situations in which teens faced charges filed directly in adult court, the defendants were accused of multiple murders, gang-fueled slayings or sexual assaults.

In another case affected by Proposition 57, a 27-year-old man walked out of prison despite being convicted of murder in what police called a gang-driven slaying on the Hollywood Walk of Fame in 2011. The defendant was 17 at the time of the shooting, and Gascón’s prosecutors declined to try to uphold his conviction as an adult.

A day rarely passes that Guillermo Orellana doesn’t think about his younger brother. Wearing a shirt bearing Kevin’s face as he sat on a park bench, Orellana pointed to a tattoo on his left arm meant to represent the way his younger brother’s hearty laugh would be seen as an audio wave on a mixing board. He said it was painful enough to have to face his brother’s killer in court, but he felt worse knowing the prosecutor wouldn’t fight for his family’s wishes.

“We feel like it’s not America, like we’re not in the United States, we’re in some other country that’s corrupt,” he said. “What happened? What did we do wrong?”

Juvenile justice attorneys, however, have accused Cady and other victims’ advocates of exploiting the pain of those like the Orellanas for political purposes. Marketa Sims, an appellate attorney with the L.A. County Bar Assn.’s Independent Juvenile Defender Program, said much of the pushback around the Proposition 57 cases has mirrored larger discontent with Gascón that has sought to frame crime victims as universally opposed to restorative justice.

“We’ve had a victim who said they forgave the client, and that’s happened more than once,” said Sims, who has stood opposite Cady in court in several recent cases. “This idea that the victim attorney is putting forward, that victims want to come to court repeatedly and they can’t rest until the person they were harmed by is harmed as well, is not accurate.”

Sims also scoffed at the idea that releasing juvenile defendants early was lenient, noting that many of her clients were barely through puberty when they were placed in notoriously violent facilities such as Pelican Bay State Prison. Law enforcement leaders like Gascón, she said, have realized that type of punishment is archaic.

“I think what you’re seeing in this frustration is people who are observing this change in public policy and they’re seeing it play out in their own life. It’s not surprising to see people feel that way,” she said. “But it’s important to understand the wider phenomenon. We don’t hang people anymore. We don’t burn them at the stake.”

In Sacramento County, where Dist. Atty. Anne Marie Schubert has staked her campaign for state attorney general on pushing back against progressive prosecutors, the office has reviewed 22 cases since 2017 in which juvenile defendants who had been tried in adult court invoked their right to a transfer hearing. Prosecutors there have sought to keep 15 of those cases in adult court, and succeeded in seven of those hearings, said Chief Deputy Dist. Atty. Rod Norgaard. Seven cases remain pending, and a judge ruled one defendant’s conviction should be subject to juvenile sentencing rules, Norgaard said.

Two other cases were resolved by plea deal in adult court, where defendants agreed to take a harsher penalty than they would have received in juvenile court, Norgaard said. In five others, mostly cases in which the defendant aided in a crime but did not commit an overt violent offense, prosecutors agreed to let the case move to juvenile court.

Norgaard was highly critical of Proposition 57 and said the way Gascón is handling such cases extends mercy to defendants without considering how that might affect victims.

Blair, however, said that several of the cases she’s recently handled in L.A. County involved victims who did not want to see minors face decades-long prison sentences — or, in one case, face prison time at all. Asked about the fact that she has rarely sought transfer hearings since joining Gascón’s executive team, Blair said she ultimately has to make decisions based on the facts of a case, not a victim’s wishes.

“We can’t risk people’s lives just so some people who are not familiar with juvenile law in the public can feel like we were fair to victims,” she said. “It’s the D.A.’s job to do this analysis. You’re not supposed to just put something through the court system that you don’t believe in.”