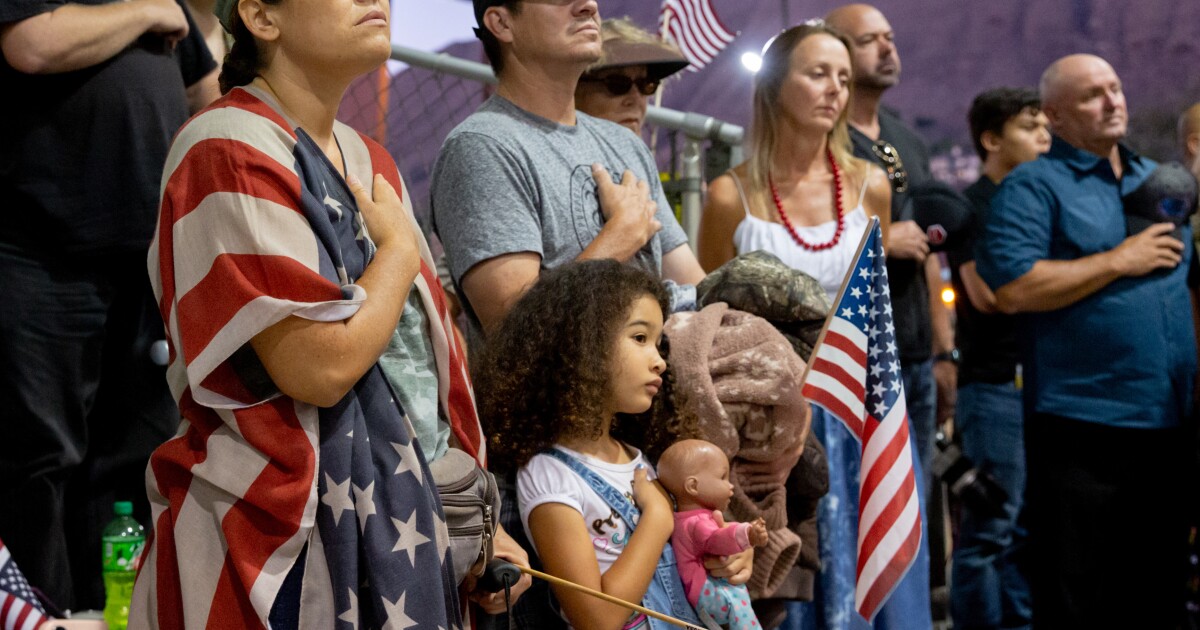 When it comes to Lance Cpl. Kareem M. Nikoui, Norco, Calif., has pride and pain and anger to spare.

Just days after the young Marine was killed in the Aug. 26 suicide bombing at Kabul airport, golf carts and horses and trucks snaked through town in an impromptu parade. The American Legion raised $25,000 for his family at a pancake breakfast.

And on Saturday night, hundreds showed up to pray and grieve and remember.

The little boy who wanted to be a Marine. The teenager who would always challenge the biggest person in the room at jiujitsu. The 20-year-old who died thousands of miles away helping terrified Afghan families evacuate their war-torn country.

“Tonight we are honoring all 13 of these U.S. service members who were killed in that airport bombing in Kabul, but, to be honest, we are all here primarily because of Kareem,” said Phil Wozniak, pastor of Grace Fellowship Church, where Nikoui and his family worshipped.

“Our purpose here is to gather together as a community to acknowledge this great tragedy,” he said, “and that it didn’t have to happen.”

The chaotic withdrawal of U.S. troops from Afghanistan after 20 years of war has sent waves of outrage across the country, bitterness about injury and death that many argue could have been avoided and fear that those left behind are in peril from the Taliban.

“Looking at this town, driving through this town, you can see the anger,” said Dennis Wilson, 57, who retired from the Army in 2002 after a decade of service. “With the flags they fly, it’s an indication of what this town is about. It’s not about Republican or Democrat. It’s about the wrong decisions made.”

Those decisions cost the 13 service members their lives, he said. But that’s not what drew him to the vigil Saturday night. “I’m here,” he said, “for those who paid the ultimate price.”

Norco, a.k.a. Horsetown, USA, has been festooned with flags and black ribbons since Nikoui’s death 10 days ago — on top of the symbols that are always present.

Sixth Street, a main thoroughfare in this city of 26,000, is striped red, white and blue, paint that’s refreshed twice each year. Banners on light posts salute men and women in uniform, past and present.

There are plenty of signs in support of Larry Elder, the conservative talk show host who wants to unseat Gov. Gavin Newsom in the coming recall election, but not that many masks to keep COVID-19 at bay. Trump beat Joe Biden here in the 2020 election in a landslide.

The 70-foot flagpole at the memorial to service members who died in the line of duty is visible from much of the small city. These days, its enormous flag flies at half-staff.

“In coming weeks, Norco will be etching the name of one young man, Lance Cpl. Kareem Nikoui, on the George A. Ingalls Veterans Memorial Wall of Honor,” Mayor Kevin Bash said, as he welcomed the crowd and pledged never to forget the sacrifice of those who died at the Hamid Karzai International Airport in Kabul.

“There are many ironies in the loss of young Kareem. His cousin actually built the Norco veteran’s memorial. And at the time of Kareem’s death, his cousin was actually building our Gold Star Family Memorial. Little did he know that he would be building it for his own family.”

That family was escorted to the vigil at the George Ingalls Equestrian Event Center on Saturday night by dozens of leather-vested Horsemen, members of a motorcycle club for retired and active-duty Marines.

The bikers lined up, somber, as the sun set on flag-waving mourners in the cavernous arena and saluted when a bugler played taps. Alexander Castle, who rides a 2011 Harley-Davidson Street Glide, is president of the Horsemen’s Norco chapter.

“I was going to go to Annapolis and be an officer, but 9/11 made me enlist and go into the infantry,” Castle said as people streamed in. “But that’s not important. What’s important is these young kids and the horrible thing that happened.… This is a complete failure from the president on down.”

Throughout the hour-long ceremony, there were promises that the 13 young troops who died would not be forgotten. There were paeans to Nikoui’s bravery. Pledges of support for his grieving family. Prayers for their strength and healing. Memories and calls for vengeance, both divine and military.

“Young Kareem was helping people at the airport that day,” recalled Rep. Ken Calvert (R-Corona). “He helped the women’s soccer team get out. If they hadn’t gotten out, they probably would have been executed.”

He repeated a Marine motto — “No better friend, no worse enemy” — and drew cheers when he talked about the terrorists who attacked the airport and pledged that the U.S. would “find every one of these people and make sure they find swift justice.”

“Amazing Grace” rang out, and “The Star-Spangled Banner.” Glow sticks handed out by the city brightened the dark arena.

As Bash, the mayor, read the name of each service member who died in the airport blast, a bell was rung. Thirteen names. Thirteen chimes.

But he could barely finish the name that drew out so many on a steamy summer Saturday night.

And the crowd cheered.