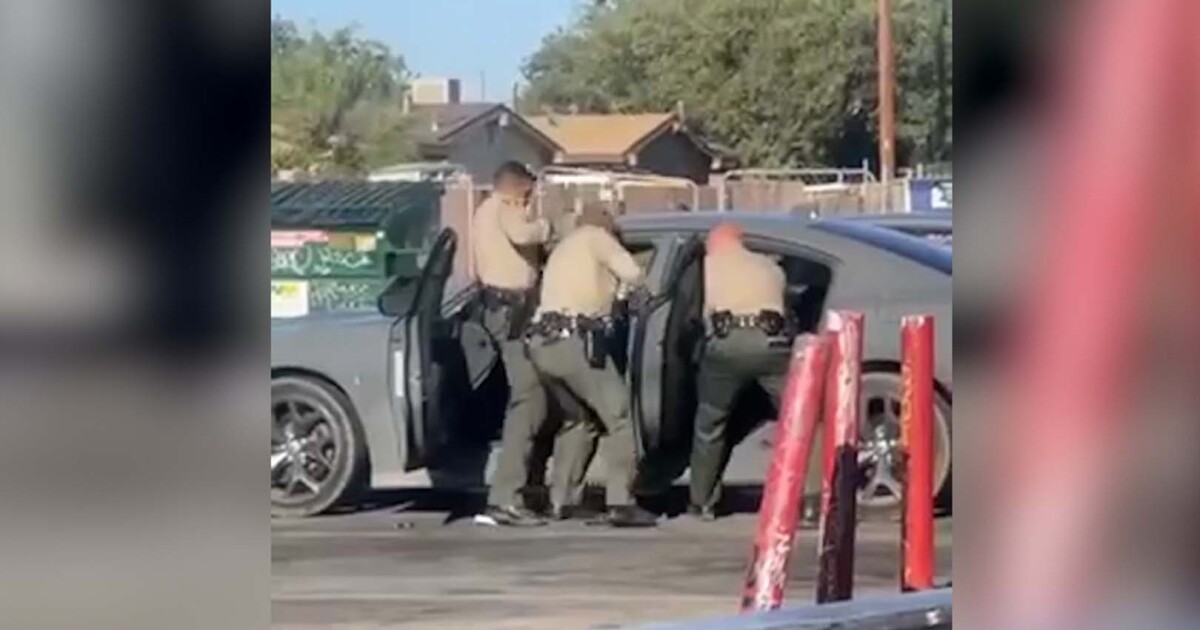 At least one Los Angeles sheriff’s deputy was captured on video punching a man multiple times during a DUI investigation in Palmdale.

Bystander video posted on social media of the incident, which occurred around 5:15 p.m. Saturday in the parking lot of a liquor store, has enraged some residents of the Antelope Valley, where the Sheriff’s Department has faced criticism for delays in complying with a 2015 settlement agreement to improve its policing.

But the department has released little information about the incident and has not explained why force was used. In a statement, officials said they would thoroughly investigate the use of force.

“Due to the active investigation, we are unable to offer further comment at this time,” the department said.

The video, spanning two minutes and 40 seconds, begins with two deputies appearing to detain Reyes on the 38000 block of 35th Street. Reyes is in the front seat of a parked car, and the two deputies are halfway inside the vehicle, largely obscuring him from view.

About 45 seconds later, another deputy rushes over. After a couple of seconds, he swings his arm and punches a person inside the car, presumably Chavez, at least eight times. Another deputy also runs up to the car and watches.

The video then cuts to Chavez lying on the ground beside the car, surrounded by six deputies. Several pile on top of him, and at least one deputy sitting on top of Chavez punches him several times.

It’s unclear whether this is the same deputy who used force earlier.

A woman now sitting in the driver’s seat of the car watches the scene and the camera pans back to show three bystanders watching from a few feet away. The person filming says, “They’re tasing him,” as the deputies continue to crowd around Chavez.

After a few seconds, a deputy leads the woman away from the car with her arms held behind her back. The video ends by showing Chavez being led away in handcuffs by three deputies with his feet tied together, his shirt ripped and his pants pulled down.

Richard Maguire, a 26-year-old Palmdale resident who filmed the encounter, said he didn’t see anything that would explain why the deputy who rushed to the car began striking Chavez.

“That officer had just pulled up,” he said. “He pulls up, runs out the car … and that’s when he starts punching the gentleman right there.”

He said he saw Chavez being shocked with a stun gun inside and outside the car.

Chavez’s mother, Josefina Chavez Reyes, said Chavez is a resident of Palmdale and in a relationship with the woman who was in the car. She said he told her on the phone that most of the blows hit his head.

Bradley Gage, an attorney representing Chavez, said that “anyone looking at the video can see that the amount of force was not objectively reasonable.”

“This behavior of these deputies is unacceptable,” he said. “Deputies involved in this incident are a threat to the safety of the community.”

Marcos Alvarez, a Palmdale resident and community activist working on a campaign led by a coalition of advocacy groups that calls for Lancaster and Palmdale to end their contracts with the Sheriff’s Department, said the incident showed that the 2015 Antelope Valley settlement agreement “has no weight to it.”

“We need police; however, the abusive nature of this incident has to be called to question because this is not the first time,” he said. “Time and time again this has been happening in the Antelope Valley.”

Over 80% of eligible Californians have partial COVID vaccine