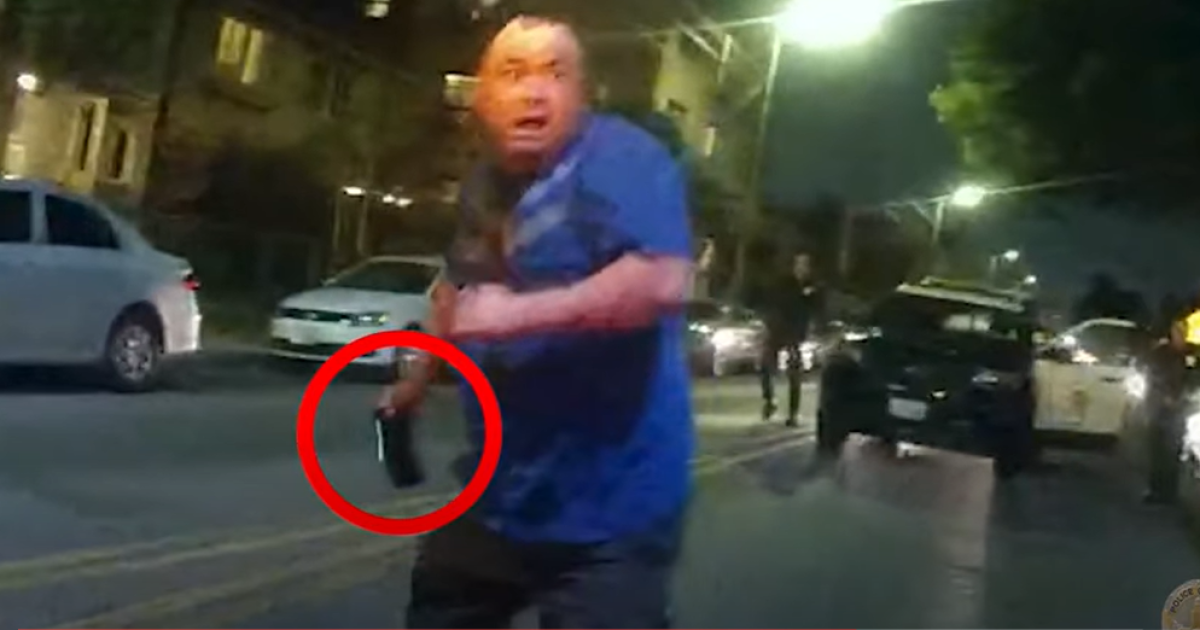 When Los Angeles police officials said a man who officers shot in Pico-Union last month had been armed with a knife, they weren’t telling the whole story.

Body-worn video from the July 26 incident, released Wednesday, shows that 53-year-old Samuel Soto was armed with a knife when he was shot by the first two officers who arrived on scene.

However, those officers had already taken the knife away from Soto — and were screaming, “He doesn’t have the knife!” — when Soto was shot again moments later by a second team of officers who pulled up after Soto had gotten back on his feet.

The footage reflects the fast-moving nature of such incidents — and highlights how initial police statements about them can be inaccurate or misleading.

The day after the shooting, LAPD Chief Michel Moore told the civilian Police Commission that officers had responded to a call about a man with a knife at the intersection of Union Avenue and Pico Boulevard about 10:50 p.m., and found Soto “holding a knife.”

“The officers gave Mr. Soto commands. However, he refused to comply, and an officer-involved shooting resulted,” Moore told the panel. “Mr. Soto was struck by gunfire and taken into custody.”

Media outlets, including The Times, reported Moore’s description of the shooting, which he told the commission was preliminary.

Soto has been charged with assault with a deadly weapon on a police officer, according to court records, and could not be reached for comment.

In response to questions from The Times Wednesday about the video and how it differs from his initial explanation of the shooting, Moore said the information he provided to the commission was based on what he had been told at the time by investigators.

He said he and other LAPD officials try to give basic descriptions of police shootings after they occur in order to “demonstrate transparency,” but recognize that information is incomplete and “will often change as additional information and evidence is collected.”

Moore said the department released the video in Soto’s shooting early — before the normal 45-day mark — in order “to expand on the details initially provided” and “demonstrate that greater transparency.”

The first two officers who responded to the call rolled up to the location and immediately jumped out of their vehicle, with one saying, “Hey, let me see your hands, bro!”

The footage then shows the man charging forward toward the second officer with a knife, and being shot multiple times.

As Soto falls to the ground, the same officer who had told him to show his hands says to his fellow officer, “I got the blade right here, bro.”

“Oh, you got it?” the second officer says.

“Yeah,” the first replies, before calling for an ambulance over the radio and telling his partner that they should get behind cover.

Soto then grunts and gets back to his feet as both officers scream, “Don’t move!” and back away.

“Hey, he has the knife?” the second officer asks, to which the first replies, “No, no, I got the knife over here.”

The second pair of officers then pull up. Soto runs around the first unit’s police vehicle, getting closer again to the first two officers as he pulls a cellphone from his pocket. The arriving officers draw their weapons.

Soto turns to move in the direction of the newly-arrived officers, and is shot once more.

Disaster prep on a budget: Tips on insurance, supplies, more