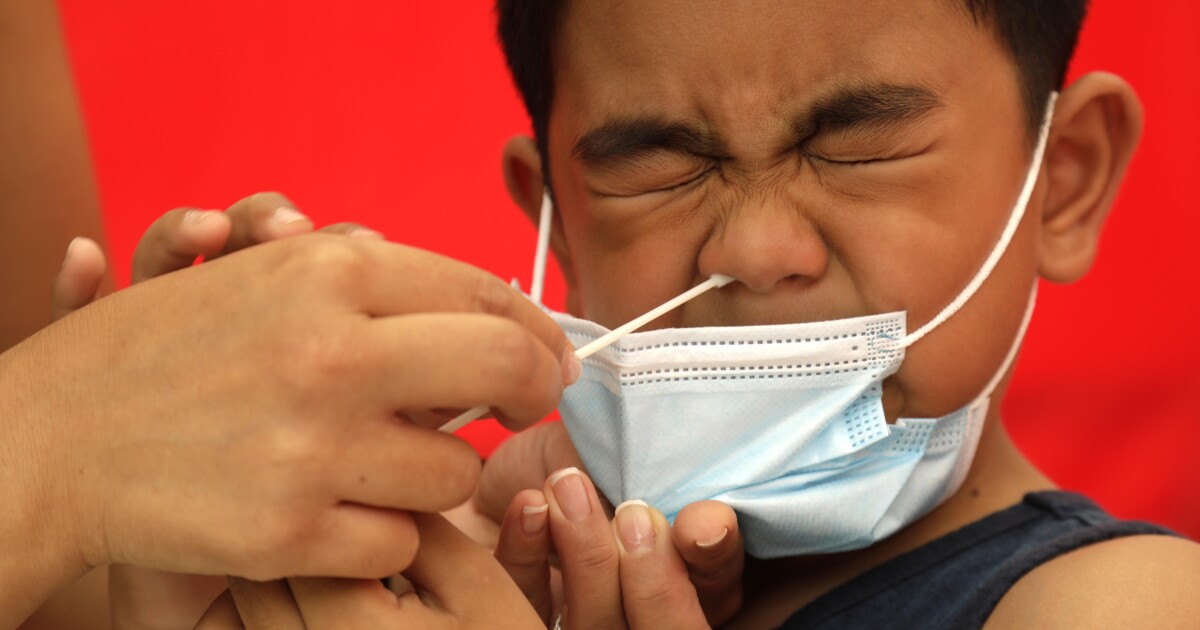 A local group has calculated that 1,893 Los Angeles Unified students and employees tested positive for a coronavirus infection during the first week of school, based on a new dashboard created using district data.

The number of cases, compiled by the group Parents Supporting Teachers, was based on adding individual figures for more than 1,400 district sites and was current through Sunday night. School district officials did not dispute the number, but noted that the total would likely change as the processing of first-week test results continued.

“These numbers seem to represent the case totals at the time they were released late Sunday,” district spokesperson Shannon Haber said. “Test results and case details are continuously updated, and information on any dashboard should be considered a point-in-time report.”

The 1,893 figure compares with a total of about 451,000 students in early education through 12th grade and close to 60,000 employees. Every student and employee must undergo weekly coronavirus testing as part of the largest school district-based program in the nation. This infection rate would equate to about 4 individuals out of every 1,000.

Officials declined to comment further before Tuesday’s Board of Education meeting.

Leaders of Parents Supporting Teachers said they were frustrated with the district’s cumbersome reporting dashboard and put together their own database using district information. The group, which includes parents and teachers, presented the data in a way that allows for easier access and sorting as well as compiling a districtwide total.

Some schools reported no infections, but it was a challenging week for the Sherman Oaks Center for Enriched Studies with 18 active infections, according to both databases on Monday afternoon.

The outside data effort “is intended as a stopgap, and hopefully will encourage the district to do it themselves — as we’ve been requesting since last year,” said Jenna Schwartz, a district parent and co-founder of Parents Supporting Teachers. “If I was able to pull this all together in a day possessing the technological acumen of, well, me, there is zero excuse as to why the district hasn’t had this set up from the beginning.”

A difficulty with the L.A. Unified dashboard is that parents have had to navigate to their school from a dropbox that contains a list of more than 1,400 names — one for every separately managed school on the district’s nearly 1,000 campuses. This format also allows for the display of only one school at a time. There is no way to compare schools or regions and no total or cumulative numbers for the school system as a whole.

The district also has not broken down data to separate staff and student cases. Nor has it yet released information about how many students at a school have been or are in quarantine because of suspected close contact with an infected person. However, the district is providing data on the number of cases suspected of having been transmitted at a campus. So far, there are zero.

L.A. Unified is not required by state or county health agencies to do more than it’s doing. The district is required only to alert infected individuals and their families, determine close contacts and notify close contacts with quarantine instructions. All the same, officials acknowledge that the first iteration of their active-case dashboard is difficult to use. Haber said that the district is developing a revision that will be easier.

There are other school systems disclosing information that L.A. Unified is not. Santa Monica-Malibu Unified provides information on how many students are currently in isolation and how many are in quarantine at each school. Long Beach Unified, where the school year has not started, will divide cases into the categories of students, employees and visitors/vendors. Glendale Unified includes the number of students and employees at each campus as well as showing the active and cumulative numbers for cases among each group.

L.A. Unified has surpassed the vast majority of other school systems in the scope of its coronavirus testing mission, which most parents seem to appreciate and many parents from other school districts regard with envy.

The L.A. district required baseline testing of all students and staff as a condition for returning to campus and also requires weekly testing, regardless of whether an individual is vaccinated. Because L.A. Unified is doing more testing, it is almost certainly going to find more cases.

When infections are found, students and staff are likely to be quarantined, resulting in additional disruption to academic work.

“It is now abundantly clear that there is no live instruction plan in place for these quarantined students,” Danna Rosenthal, a leader with the parents group California Students United, wrote in a letter to district officials. “Just like last year, LAUSD is allowing their students to fall behind.”

Students or staff who are infected must typically isolate at home for at least 10 days. Close contacts had been required to quarantine at home for eight to 10 days, but the district modified that policy on Monday. Close contacts who are vaccinated no longer have to quarantine unless they develop symptoms, “but should test after the fifth day of exposure, as a precaution,” according to district policy.

The district defines a close contact as an individual who has been within six feet of a person with an infection for a total of 15 minutes or more over 24 hours or had “unprotected contact with their bodily fluids,” such as an infected student sneezing on another student who was unmasked.

“All quarantine situations are unique and will be determined by the Community Engagement Team,” the district states on its COVID-19 FAQ.

Quarantine disruptions already have led to concerns among parents, who have had to scramble to arrange child care while their children’s schooling is reduced to work packets. An online instruction program is not available to those in quarantine.