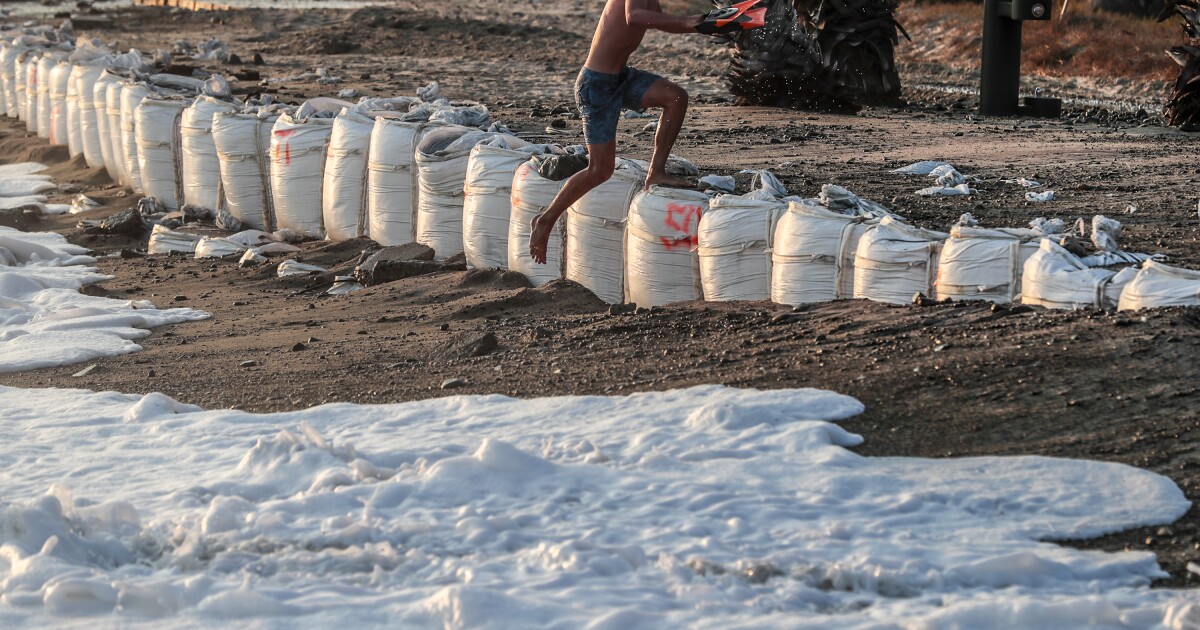 Light rain and drizzle fell across much of southern Los Angeles County on Saturday morning, and temperatures are expected to remain cool through the rest of the day.

Coastal Los Angeles County and parts of the San Gabriel Valley and Orange County reported 0.01 to 0.04 inch of light rain or drizzle Saturday morning, said David Gomberg, a meteorologist for the National Weather Service in Oxnard.

The moisture and cool temperatures were caused by a deep marine layer that extended as far as 4,000 feet, Gomberg said. Temperatures are expected to peak Saturday at 78 degrees in downtown Los Angeles and the lower 80s in the San Fernando and San Gabriel valleys.

The deep marine layer and cooler temperatures have, at least for the weekend, eased concerns about fire conditions in the Los Angeles area, Gomberg said.

Temperatures are expected to remain mild Sunday before beginning to rise Monday. By Wednesday they will be “well into the 90s,” Gomberg said, and as high as 100 degrees in areas such as Woodland Hills and Palmdale.

The weather service warned of elevated surf and dangerous rip currents over the weekend at Southern California beaches, particularly those that face south. The weather service advised that people either stay out of the ocean or swim near lifeguard towers. The heavy surf could wash people off of beaches or rocks and capsize small boats, it warned.

Kealiinohopono “Pono” Barnes, an ocean lifeguard specialist with the L.A. County Fire Department, said the dangerous beach conditions were caused by high surf out of the south, combined with large tidal swings from an upcoming full moon Sunday.

Swimmers can easily be pulled laterally into larger rip currents and carried out to sea, Barnes said. A swell is grazing the south side of Santa Monica Bay, hitting the coastline at an angle. As a result, Barnes said, he was pulled more than 1,000 yards down the beach in 20 minutes while in the water Thursday.

Lifeguards on Thursday had to rescue a couple who had been swept away by a high tide near Sunken City in San Pedro. The woman suffered a leg injury and was airlifted to a hospital.

Caldor fire near Sacramento rages on