Caldor fire near Sacramento rages on 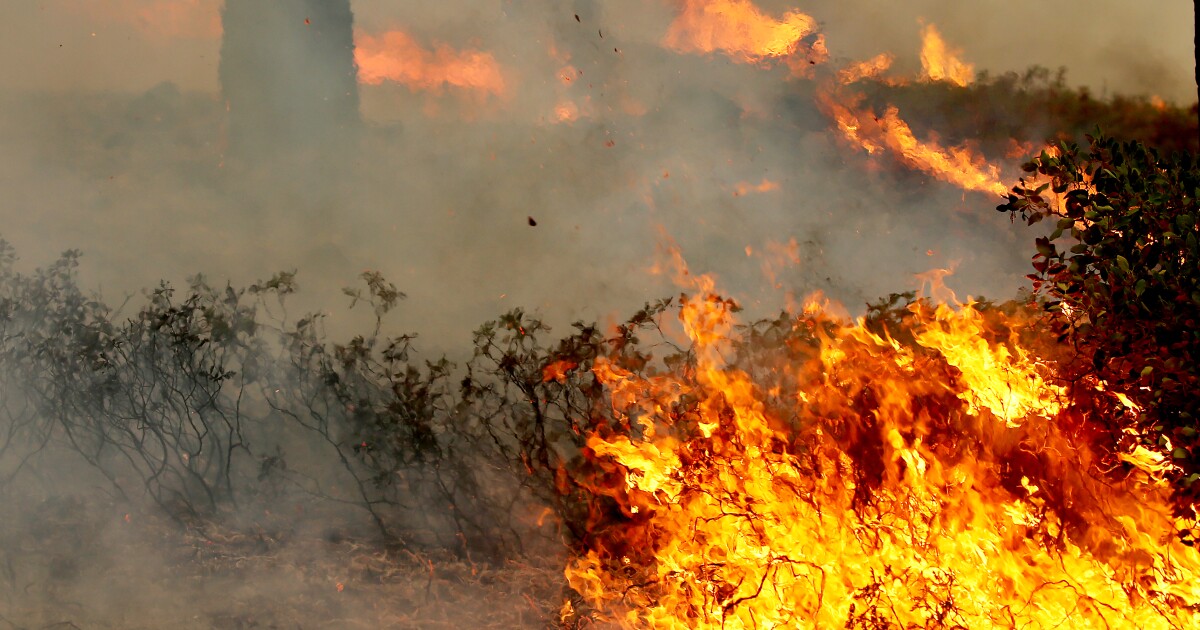 For the past five days, Frank and Jeannette Castaneda have been living out of their truck in the parking lot of a community center, among thousands of families forced from their Northern California homes by the raging Caldor fire.

The couple escaped the blaze, which has charred more than 82,000 acres east of Sacramento, with their 12-year-old dog Maggie, sanguine that they were all together.

When asked if it was the first time they’d had to evacuate in the 35-plus years since they’ve lived in the rural Pacific House community in the El Dorado foothills, Frank, 73, just laughed.

“It’s about the sixth,” he estimated.

With another intense wildfire season now raging across the state, the still-young Caldor fire in El Dorado County has become one of the largest threats. The fire, now a week old, has destroyed 245 structures, including 81 more Friday night. As of Saturday afternoon, firefighters had yet to contain any of the spreading flames.

Fire officials said Saturday morning that high winds and the dissipation of an inversion layer that had created some moisture could lead to further growth of the fire and dangerous conditions for firefighters.

“We know that wind component’s out there, we know the potential for large fire spread is ramping up quickly this morning, and we’re going to continue to see that potential grow throughout the day,” said Capt. Thomas Shoots, a public information officer with the California Department of Forestry and Fire Protection.

Authorities shut down a segment of Highway 50 and issued new evacuation orders Friday evening in anticipation of the weather. Nearly 30,000 people have been evacuated.

The Cameron Park Community Center was full Saturday, with 42 people staying inside and another 27 on the grounds. With the shelter at capacity, the Castanedas set up folding chairs under trees to spend the afternoon. Maggie, a catahoula, was sprawled out on a dog bed between them. The animal had finally started to eat and was even sleeping a little bit, said Jeannette, 70.

While fires used to force them from their home every 10 years or so, the couple said, the pace has picked up recently and the blazes have grown fiercer.

“The fires seem to be getting bigger and bigger every year,” Frank said.

Still, they don’t plan to move from their home, saying they enjoy what otherwise is quiet living.

“I take it with a grain of salt,” Frank said. “The way I figure, I don’t dwell in the negative. There’s nothing I can do. The fire’s there. Eventually we’ll go home.”

“And either there is something there or there isn’t,” Jeannette said.

John Novak, 62, left his Pollock Pines home Tuesday after a sheriff’s deputy came by and told him to leave. He and his wife don’t drive, so a neighbor took them to the community center.

He brought the essentials: socks, underwear, his birth certificate, military discharge papers and the registration for his trailer.

“I just want to go home,” he said, adding it’s the first time he’s had to evacuate in his 25 years as a resident.

On top of the stress of being displaced, Novak is worried about catching the coronavirus even though he and his wife are vaccinated and everyone staying at the shelter had to take tests before they were admitted, he said.

Like other residents, Novak is no stranger to living with fires but has watched them grow more severe.

“Part of it’s global warming,” he said. “And nature just has a way of cleaning house now and then. A lot of these areas haven’t burned in 50 to 100 years.”

Local officials have been trying to accommodate evacuees wanting to vote on the effort to recall Gov. Gavin Newsom. Ballots have been mailed to all registered voters in advance of the Sept. 14 election. The Castanedas were able to pick up their ballots at the Diamond Springs post office and plan to vote in a drop box installed in the evacuation center’s parking lot. Officials also are planning to set up in-person voting at evacuation centers next week.

Across the street from the firefighting base camp at the El Dorado County Fairgrounds, a vendor had set up a tent and folding tables to sell Caldor fire souvenir T-shirts that were fashioned to look like action movie posters.

Business was booming Saturday. By midday, Justin Bethke, 25, a salesman for The T-Shirt Guy, based in Coloma, estimated he’d sold about 100 shirts to firefighters and local residents.

Authorities dealing with multiple large fires are having to decide where to direct personnel and supplies. The battle continued against the Dixie fire, which had grown to 714,219 acres as of Saturday morning and is the state’s second-largest wildfire on record. The fire, which is spreading in Butte and four other Northern California counties, has been active for more than a month. The fire is now 35% contained.

Firefighters battling the blaze there are expecting advantageous weather conditions Saturday. While winds could reach 35 mph or higher during the day, a shift in direction could drive the fire into itself, which would help keep it from spreading, said Doug Ulibarri, a spokesman for the Cal Fire incident response team.

On Friday, crews lifted an evacuation order for the Plumas County community of Chester, allowing 3,600 people back into the town. Saturday morning, the Seneca Healthcare District Hospital in Chester reopened as well.

Authorities had to issue another evacuation order Saturday afternoon due to the Dixie Fire, however, in the Sugar Loaf area in northern Plumas County.

Meanwhile in Southern California, a blaze that ignited Wednesday in Kern County more than tripled in size over Friday night.

The French fire near Lake Isabella grew to 11,295 acres and was 5% contained as of Saturday morning, according to the Kern County Fire Department. Evacuation orders were in effect for communities surrounding the lake, with evacuation warnings in place for areas north to the Tulare County line.

For many Afghan refugees, the struggles don't end when they reach U.S. soil