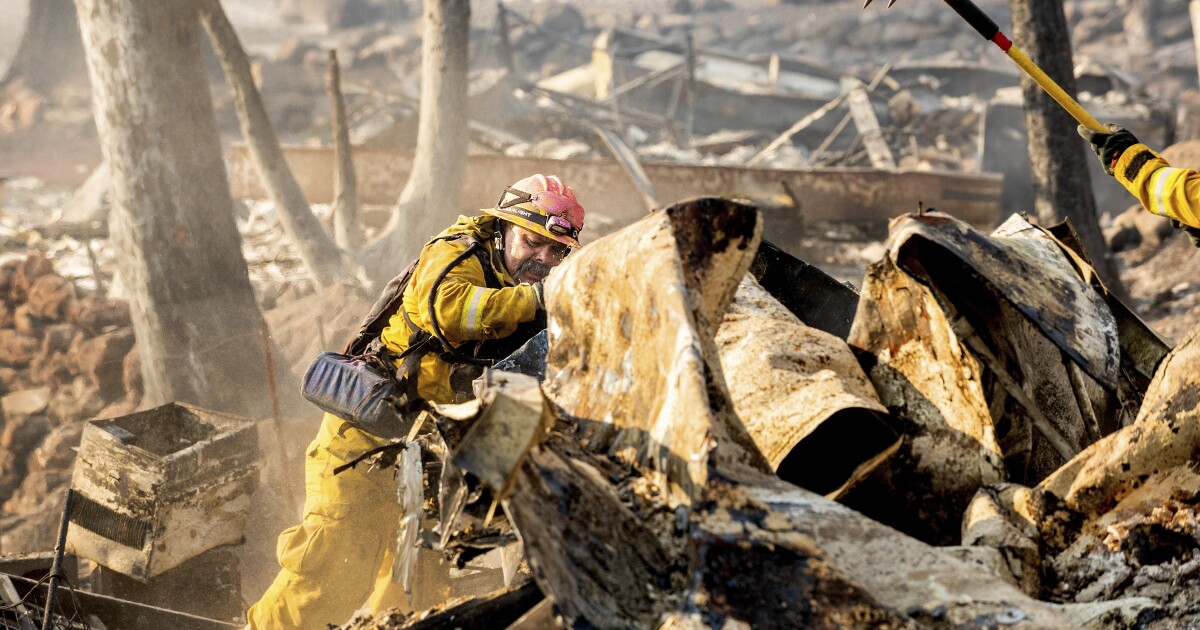 After more than a year of COVID-19 disruptions, 11-year-old K.C. was enjoying her first week back at school.

Then a wildfire broke out. It was about 1:30 p.m. Wednesday, about an hour before Lower Lake Elementary would have let out.

What was soon called the Cache fire was close — just a few minutes’ drive — and it was spreading rapidly in the rural communities of Clearlake and Lower Lake. It tore through homes, destroying at least two dozen structures by Thursday. Power was out and phones stopped working. Stoplights were flashing and black ash filled the air.

Three schools in the Konocti Unified School District were evacuated: the elementary school, Lower Lake High School and Carle School, according to an alert posted on the district’s website.

Jaqueline Snyder, K.C’s mother, told her to “get in the car with any adult you quasi-know” and get out of the area; Snyder asked that her daughter be referred to as K.C. to protect her identity. Snyder drove by the high school at some point and saw spot fires igniting in a field in front of it.

“It was windy, it was throwing sparks — it was not good,” she said.

K.C. found her former babysitter, Laurel Bailey, whose son Jaxson, 12, was also evacuating from the elementary school. Bailey’s 15-year-old daughter, Reagan, had to leave the adjacent high school but was already on a bus headed to the evacuation center.

It was “a pure panic zone,” Bailey said. The two schools are within walking distance but people were running madly, cars were strewn everywhere.

“I’ve only seen that on TV,” she said. “I’ve never been through something like that.”

Given the pandemonium and traffic diversions, it took them about two grueling hours to get home.

It was the third day of school. After just two days of getting to know their teachers and settling in — on top of more than a year of COVID-19-related disruptions — the children were back at home.

The area is no stranger to fire. For the last five years or so, blaze after blaze has upended the community.

Snyder is the chair of the Lake County Fire Protection District board of directors and a former firefighter. She’s seen fire behavior become more extreme over the years firsthand — and its direct effect on her child.

“I have experience in the fire service, so if I remove myself as a parent, I’m fine,” she said. “But as a parent, it’s more just kind of heartbreaking what our children have had to go through the last several years.”

The Clayton fire that started in August 2016 just south of Lower Lake ravaged the remote community, including the schools.

The blaze, the work of an arsonist, delayed school for the second consecutive year. The Rocky fire pushed back the first day the previous year, and was followed by two subsequent fires: the Jerusalem and Valley.

Then COVID-19 shut down the schools for months. Snyder said this school year would have been one of the first one in a while to start on time.

“This is actually the first year in — I don’t remember — that we actually started on the day they said that we were going to start,” said Bailey, who runs a cleaning business. It’s been years, she said.

“We’re all pretty exhausted,” Snyder said of the fires. “Every time wind picks up in this dry heat, everybody gets nervous.”

The Cache fire also wiped out about 30 power poles and a transmission line. Power for the area was still out Thursday morning, and all Konocti Unified schools were closed.

Supt. Becky Salato said in an online update that district staff were cleaning the schools and the HVAC filters would be changed “to assure a safe return for our students and staff.” Salato said there was no structural damage to the schools.

Though Bailey lauded the school’s evacuation efforts, she was concerned about the lasting emotional toll on students and staff. She said she thinks the expected return to classes next week will be traumatic.

Homes near the school burned in a previous fire, Bailey said, surmising that the children who lived through that would be particularly shaken.

She hopes the community will come together and make a better plan should something similar happen again.

“It’s an experience that I hope we never have to go through again,” she said. “But you never know.”