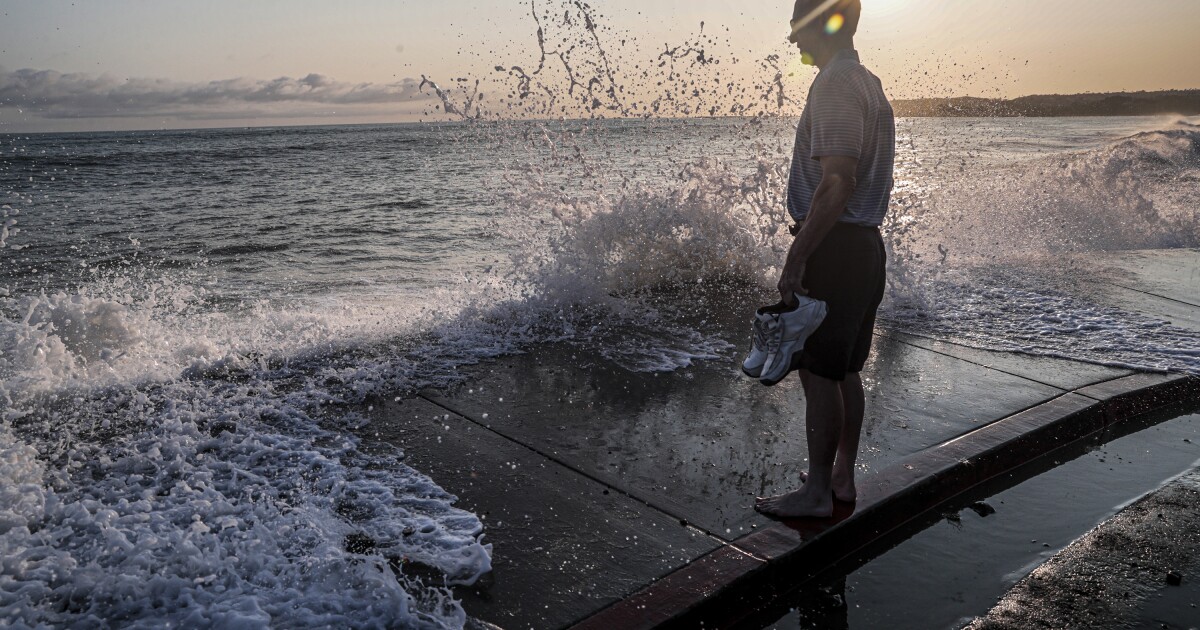 Surfers and swimmers in Los Angeles and Ventura counties should expect dangerous conditions through Saturday evening, according to a hazard statement from the L.A. County Fire Department’s Lifeguard Division as well as the National Weather Service in Oxnard.

Elevated surf, high tides and strong lateral and rip currents are expected at all beaches in those counties, the weather service said, with the highest surf expected on south-facing shores, such as in Malibu.

“There is an increased risk of ocean drowning,” the weather service said. The hazard statement hasn’t been elevated to a warning or advisory by local lifeguards. “Rip currents can pull swimmers and surfers out to sea. Waves can wash people off beaches and rocks and capsize small boats nearshore.”

No warnings or advisories have been issued by local lifeguards.

Coupled with the big waves, high tides have caused coastal flooding in some cities.

In Laguna Beach, the Aliso Beach parking lot remained closed Friday. Orange County maintenance crews were working to clear the lot of debris swept in by the high tides, according to Jason Ross, a marine safety lieutenant with Orange County Lifeguards.

A high surf advisory is in effect at some Orange County beaches, where red flags flew from lifeguard towers indicating, hazardous conditions that are unsafe for novice beachgoers, Ross said.

Kealiinohopono “Pono” Barnes, an ocean lifeguard specialist with the L.A. County Fire Department, said high surf out of the south paired with large tidal swings from the Aug. 22 full moon are causing the hazardous conditions.

He compared the ocean to a swimming pool that is filled to the brim with both water and children splashing. “What’s happening is we have a lot of water moving in and out with the tides paired with large surf,” which increases the risk of rip currents, he said.

Those who do venture into the water are encouraged to stay on the shallow sandbars and avoid the risk of being pulled laterally into larger rip currents that can sweep swimmers out to sea, Barnes said.

The swell is grazing the south side of the Santa Monica Bay, hitting the coastline at an angle. As a result, Barnes said he was pulled more than 1,000 yards down the beach in 20 minutes while in the water on Thursday.

A couple in their 30s were rescued Thursday evening after a high tide swept them off their feet near Sunken City, a popular cliffside overlook on the site of a natural landslide at Point Fermin in San Pedro, authorities said.

The woman suffered a leg injury and had to be airlifted to a hospital, said Brian Humphrey, a spokesperson for LAFD.

On L.A. radio, he's kept the gospel of this Mexican icon alive for 21 years