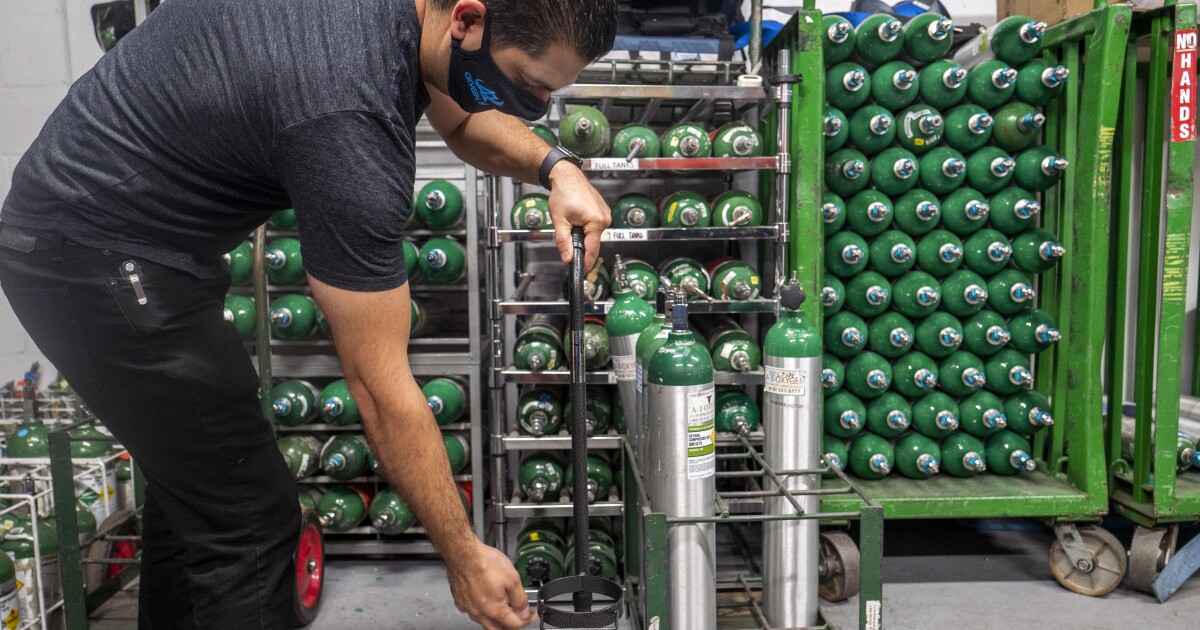 He had just been released from an 11-day hospitalization after suffering a breakthrough infection of COVID-19, and he had no backup oxygen tanks handy.

For the next two hours, he called everyone he could think of to try to get a replacement for his machine, trying not to panic as he was placed on hold for the eighth time.

Finally, after being forced to answer the same questions multiple times, he broke down over the phone and cried. He told a hospital employee, “I think I might die today,” and a few hours later, the company provided a replacement.

The experience left both of us a bit shaken. Jason is one of my most voluble and expressive friends. He’s a fearless and stubborn debater, and he throws his head back and laughs with his whole body if he finds something funny. Now he’s struggling to catch his breath. Oxygen dependency has forced an uncomfortable new familiarity with his own mortality.

“What I do know psychologically is that if the machine stops working, I can’t breathe. Which makes me feel like I’m going to die if it breaks,” he said.

I wanted to tell Jason’s story because it shines a light on the lesser-known aftermath of this disease. The road to recovery can be long and treacherous, and to travel it, you need oxygen.

Jason is one of many COVID-19 patients relying on supplementary oxygen after battling the illness. Most COVID patients who experience long hospitalizations are given a six-minute walking test to see how much oxygen concentration in their body declines as they move around. If their oxygen concentration falls below a certain threshold — around 90% — they can’t be released from the hospital until arrangements for supplementary oxygen have been made.

Most patients are sent home with an oxygen concentrator — a machine with a breathing tube that plugs into an outlet and harvests oxygen from the atmosphere — and a tank of oxygen that can last up to six hours.

The tank is supposed to be there for backup in case the machine malfunctions, so the patient has a way to breathe while the company sends a repairman. It also allows the patient to move around, albeit with a large, cumbersome 30-pound oxygen tank in tow.

These devices, and the oxygen supply chain, have become an essential part of the nation’s medical infrastructure for battling COVID-19. For both vaccinated and unvaccinated patients, supplementary oxygen delivered through ventilators, concentrators and tanks allows the body to function as it battles the disease. Oxygen is also essential to the healing process, because virus-damaged lungs often do not produce enough oxygen as they heal.

Surges in COVID-19 case rates are usually followed by large, destabilizing increases in oxygen demand. In Florida, which has become the nation’s COVID-19 hot spot over the last week, hospitals are using four times as much oxygen as they do on average, said Rich Gottwald, president of the Compressed Gas Assn., a trade organization for producers of medical gas equipment.

The sharp uptick in the demand for oxygen deliveries in the middle of a labor shortage has left many companies without truck drivers to deliver the gas. Companies are going out of state to find drivers, Gottwald said.

Case rates in California are down from last year. But it’s still hard to get new oxygen equipment — purchase orders can go without responses for months, said Edmond Manukyan, the manager of a medical supply store in Glendale, A-1 Oxygen Inc.

“A lot of the equipment just wasn’t being manufactured,” Manukyan said. “But things are looking up now.”

At the peak of California’s surge, the company was renting up to 30 oxygen concentrators a month. Now it’s back down to around 10.

For patients, oxygen reliance can be expensive. Without insurance, a tank of oxygen that lasts four to six hours can cost $80, and an oxygen concentrator costs about $8.50 a day to rent.

Jason is trying to count his blessings and avoid thinking about the bill that might be coming. When he went to the hospital, his oxygen concentration was just 40%.

“I realized I could have died in my sleep if I didn’t go to the hospital right then,” he said.

When we spoke last week, it was the first day Jason was able to go longer than 20 minutes without wearing an oxygen tube. It was enough of a milestone that he took a video of it to share with his friends and family.

The silver lining to the experience is that it has prompted one of his family members to get vaccinated. His family, like many Black people, harbor bad memories of medical discrimination and many of them are still reluctant to get vaccinated.

Cecilia Jauregui’s brother Adrian came down with COVID-19 a few weeks ago. He was hospitalized for two weeks, and couldn’t be released until hospital authorities worked out who would pay for the oxygen. Jauregui ended up driving to an oxygen supplier and getting two tanks and a rented concentrator for about $250.

Adrian considered himself a germaphobe and took every precaution short of getting the vaccine, Jauregui said. He isn’t sure, but he believes he might have contracted it from a co-worker. His hospitalization has been a wake-up call for the whole family.

“After seeing what he was going through, it was an eye-opener,” Jauregui said. Getting the vaccine “is not just about us and you as your personal choice. It’s about the people out there that you don’t know that you pass on the street, that you work with.”