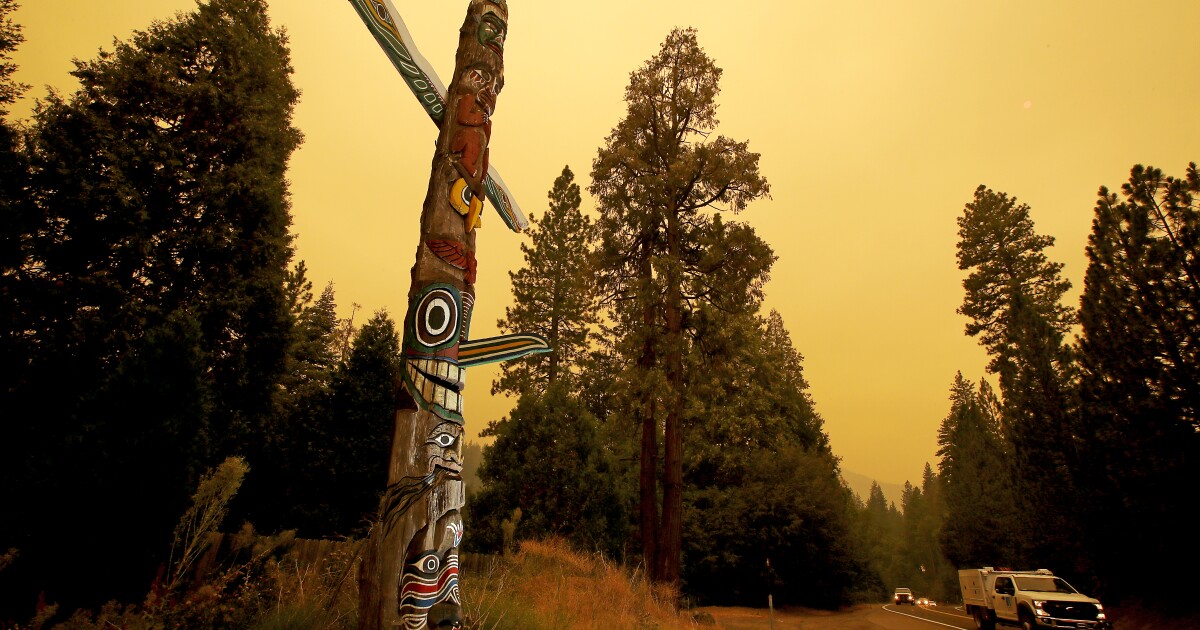 Officials have issued air quality alerts warning of hazardous conditions that could last into the weekend.

“Overall, there’s smoke pretty much covering most of Northern California,” said Bill Rasch, a meteorologist with the National Weather Service in Sacramento.

The Bay Area Air Quality District extended its air quality advisory for wildfire smoke through Friday, noting that light northerly winds are transporting smoke from the fires into the region.

The agency also issued a “spare the air” alert through Friday indicating that pollution in the area will exceed federal health standards, officials said.

Agency spokeswoman Kristine Roselius said conditions in the Bay Area tend to be clearer in the mornings and get worse as the day wears on, when smoke meets with heat and mixes down to the surface.

Residents are also seeing ash and soot, she said.

“There’s a lot of smoke aloft, and what happens is that ash is heavy, so it starts dropping down,” said Roselius, who lives in the North Bay. “I cleared it off my car this morning.”

The El Dorado County Air Quality Management District advised of dense smoke and unhealthy air quality through Thursday, while the Placer County Air Pollution Control District warned the public to prepare for worsening conditions over the next several days.

Residents who can see or smell smoke are advised to stay indoors with doors and windows shut, and use N-95 masks whenever it is necessary to go outside, Placer County officials said.

The smoke is coming from several large fires, including the multicounty, 678,000-acre Dixie fire and the Caldor fire in El Dorado County, officials said.

The Caldor fire, which ignited Saturday, exploded to more than 65,000 acres Thursday morning.

McBain said yellowish skies were giving way to reddish hues, including an intense halo around the sun.

“This is very concerning, of course,” McBain said. “We’re still in the throes of a pandemic and our health is at risk from that, coupled with wildfires which compound COVID. Even if you’re relatively healthy, it’s obviously not good to breathe these pollutants year after year.”

Wildfire smoke is composed of small particles that can be inhaled deep into the lungs, and can cause negative health impacts — particularly for sensitive groups such as people with asthma.

Studies have found that the smoke can also contain fungi and bacteria, as well as heavy metals and other toxic substances.

Experts advise people in affected regions to avoid strenuous activity and invest in air filters or purifiers if possible. People with air conditioners can set them to the “recirculation” setting to prevent outside air from pulling into their homes.

Another option is to create a “clean room,” or an area in the home closed off to outside air that can be cleaned with a portable filter.

“Sadly, this seems like the new norm for fall,” said Mill Valley resident MJ Gorton. “Every year I get more worried about wildfires. It’s super dry where I live, and that combined with the drought is reason for concern.”

Indeed, the conditions are similar to what the region saw during last year’s devastating wildfire season. A Reddit user unearthed a Google Street View image from September 2020 that captured the tell-tale martian glow in Redwood City.

Rasch, the meteorologist, said changing winds could soon shift the smoke in a northeastern direction, which could be good for California but not necessarily for the rest of the country.

Already, smoke from the fires has blanketed much of the continent.

“It’s worse in some places, but it’s moving around,” Rasch said. “This stuff has been blowing all the way across the country.”