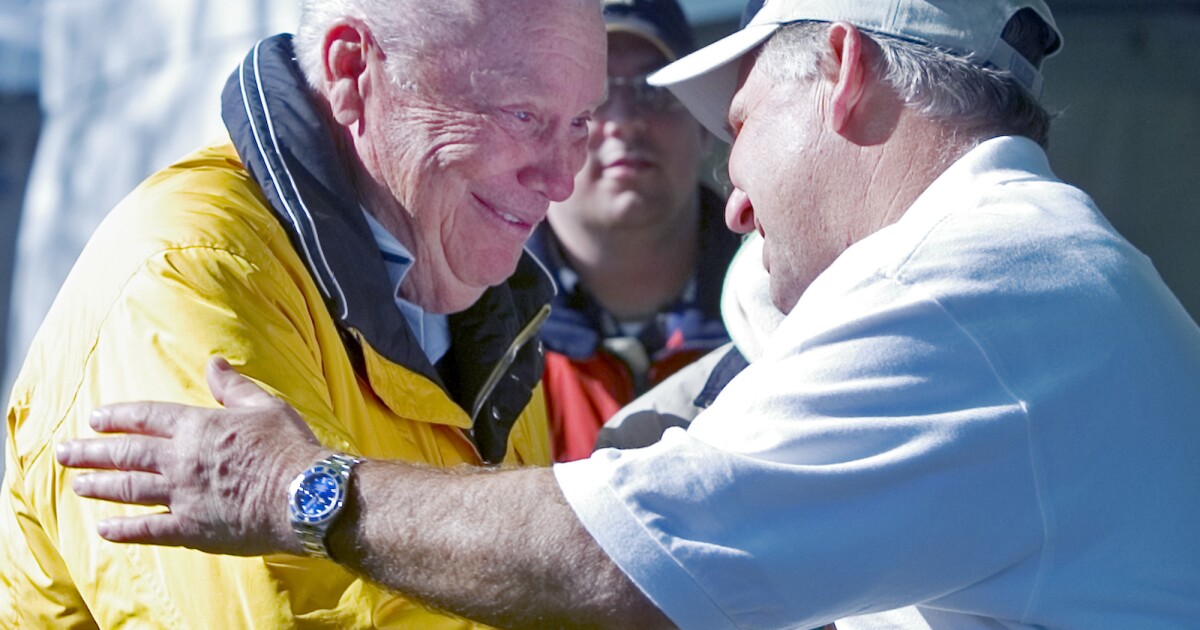 Billionaire philanthropist B. Wayne Hughes Sr., who pioneered the self-storage industry with his company Public Storage and whose epic rise from sharecropper’s son to largest donor in University of Southern California history testified to the promise of post-war Los Angeles, died Wednesday at age 87.

Spendthrift Farm, the legendary Lexington, Ky., thoroughbred ranch Hughes bought a decade and a half ago, said in a statement on its website that he died at his residence there surrounded by family. No cause of death was given.

“To have known Wayne Hughes is to know he loved life, his country, USC and its football team, the horses, and his family,” the statement said.

Hughes was working in real estate in L.A. in the early 1970s when a business associate, Kenneth Volk Jr., happened across a self-storage facility outside Houston. When Volk went inside posing as a customer, an employee informed him there was a waitlist for units.

Volk took the idea back to Hughes, who immediately grasped its potential.

The cinder-block storage units were cheap to build and delivered steady rental income without costly overhead.

“I saw a method of holding prime land with income,” Hughes told The Times in 1990.

He sunk $25,000 into the business, with the first Public Storage opening in El Cajon in 1972. Within months, it turned a profit, and Hughes was searching for sites for other locations.

“After that it was just building the units up, one at a time. For years and years. That’s all,” Hughes told GQ in 2012. “You don’t get money unless you have a lot of talent, which I don’t have, or you work hard, which is what I do. We don’t have any golden touch here.”

By the time Hughes stepped down as chairman of Public Storage’s board in 2011, the company’s orange signs were ubiquitous on highways across the nation, and Forbes put his personal wealth at $3.2 billion.

His retirement did not last long. He was among the most high-profile racehorse owners and breeders, and is credited with rebuilding the storied Spendthrift Farm, which co-owned the 2020 Kentucky Derby winner and horse of the year, Authentic.

In 2012, he also founded Agoura Hills-based American Homes 4 Rent, which quickly became a dominant force in the emerging industry of single-family home rentals. He retired from American Homes in 2019, turning the reins over to his daughter.

Hughes gave much of his money to charity. As of two years ago, he had donated more than $400 million to USC. He gave almost all of it anonymously, with even some of his fellow trustees on the university board ignorant of the extent of his largesse.

“Wayne Hughes was an incredibly humble, generous, and loving man,” said Rick Caruso, chair of the USC Board of Trustees, in a statement. “He was a dear friend, a dedicated father, a remarkable leader, and a passionate philanthropist. We were honored to have him on our Board and as part of our Trojan community. He will be deeply missed by his family, who he loved so much, and by all who knew him.”

When he gave the university $5 million to name the floor of the Galen Center basketball court for his former classmate Jim Sterkel, he insisted on keeping his identity secret.

“The joy I have in remembering Jim would be significantly reduced if people knew who I was,” he told Times sports columnist Bill Plaschke in an anonymous interview in 2006. Sources later revealed to the newspaper that the donor was Hughes.

His under-the-radar approach to philanthropy was consistent with his personality. Long after Glendale-based Public Storage became a billion-dollar business, Hughes maintained his middle-class habits, eating fast-food, wearing faded jeans and hanging out with buddies at the Santa Anita racetrack.

Bradley Wayne Hughes was born Sept. 28, 1933, on a farm in Oklahoma’s Kiowa County. His parents, who both had eighth-grade educations, moved to L.A. in the 1930s, part of the Dust Bowl migration depicted in “The Grapes of Wrath.”

The family settled in El Monte, and he graduated from Alhambra’s Mark Keppel High School in 1951. After a stint at junior college, Hughes won a scholarship to USC that propelled his career and permanently shaped his identity.

In those years, the football team was a source of enormous pride for the university, and its victories over powerhouse teams across the nation boosted the reputation of USC and its hometown.

Hughes’ devotion to USC continued after graduation. Even after he was a married father with a business, he attended practices and befriended the squad’s stars.

After players such as Rodney Peete, Marcus Allen, Lynn Swann and O.J. Simpson graduated, he kept up those relationships, entertaining their children at his home, hiring them on at his company or investing in their endeavors.

When Simpson was arrested on suspicion of murdering his former wife, Nicole Brown Simpson, and her friend Ronald Goldman, Hughes remained an adamant supporter of the former running back. He met with lawyers’ charting a defense strategy, visited Simpson in county jail and acted as a legal guardian for the couple’s two young children.

Simpson and Hughes appeared to have remained friends for some time after the acquittal, but the status of their relationship in later years, after Simpson was imprisoned in a Las Vegas robbery case, is unclear.

Swann, the Pittsburgh Steelers star who was inducted into the NFL Hall of Fame, also remained close with Hughes. Swann sat on the board of Hughes’ company, American Homes, but that relationship fell under scrutiny during the search for USC’s athletic director in 2016.

Swann had never run an athletic program, let alone worked at a university, but he was ultimately chosen to lead one of the nation’s most high-profile athletic programs after Hughes indicated to USC’s then-president, C.L. Max Nikias, that he preferred his longtime friend.

The decision shocked close observers of college sports, and the struggles of the university’s football team during Swann’s tenure led to grumblings about Hughes’ sway at USC.

Nikias denied being influenced by “any donor or member of the board” of trustees.

Swann told The Times in 2019, “I am fortunate to have [Hughes] as a friend. Like many loyal alums, he has a deep passion for this university and is a generous supporter.”

Hughes is survived by his wife, Patricia; son, Wayne Hughes Jr.; daughter, Tamara Hughes Gustavson; and four grandchildren. He was preceded in death by his youngest son, Parker Hughes, who died in 1998 at the age of 8 after a long battle with leukemia.

Following the death of Parker in 1998, Hughes passionately committed himself to working toward a cure for childhood leukemia, ultimately accomplishing astonishing results in that area.

Amid Parker’s cancer treatment, Hughes launched a charitable foundation that today focuses on funding pediatric cancer research. Tax filings show he and his family have contributed more than $70 million to the nonprofit, which distributes money to healthcare institutions across the U.S.

The football training center at USC’s South L.A. campus bears one of the few markers of Hughes’ generosity, with a lobby atrium named for his late son. A plaque there reads, “Our little man wanted to be a Trojan. And now he is.”