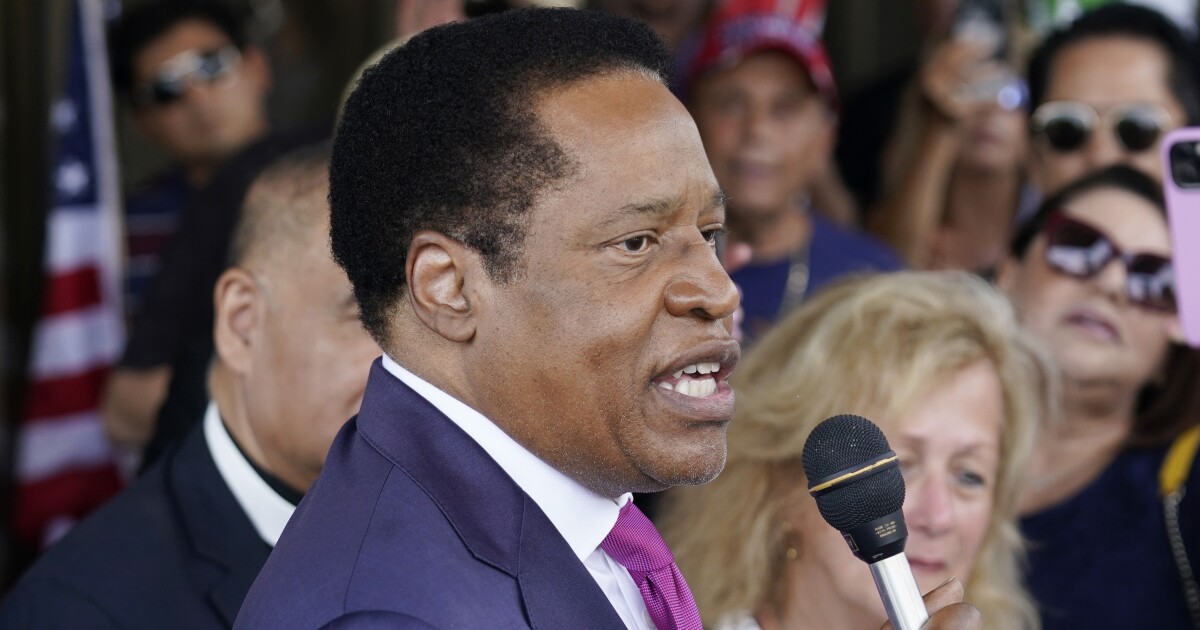 Radio talk show host Larry Elder slammed California Gov. Gavin Newsom on Wednesday as “utterly incompetent” in reducing the forest fuels that power the state’s massive wildfires, part of a broad critique in which the top challenger in the state’s recall election also trashed the state’s stringent environmental laws and promoted the use of climate-warming carbon-based fuels.

Elder suggested in a video news conference with U.S. Rep. Doug LaMalfa (R-Richvale) that he would end the “war on oil and gas” and the “attack on the logging industry,” adding that he would reduce regulation of fracking and deemphasize wind and solar power, which he called “not very efficient.”

Elder’s views put him outside the political mainstream in California but in concert with political conservatives.

The state has been one of the nation’s leaders in turning away from the burning of coal, oil and other petroleum-based fuels, which scientists describe as major drivers of the global warming that intensifies wildfires. Conservatives contend that environmental regulations have gone too far and hamstrung the economy.

Elder’s pronouncements have drawn increasing attention in recent weeks, as polls show him surging to the front of the dozens of contenders who want to replace Newsom if he is recalled in the Sept. 14 vote.

During the media event, the challenger continued to lash out at journalists he perceived as misrepresenting his record, took one of his first shots Wednesday at a fellow challenger and depicted himself as aligned with former President Trump on many issues but not a captive of his worldview.

Elder tried to keep the focus in his first extended news conference on the emotionally charged threat of wildfires. That could be fertile terrain in California, where ever-expanding blazes have taken scores of lives and caused billions of dollars in property damage.

Elder spoke from his home office in the Hollywood Hills, while LaMalfa — one of his newest Republican supporters — appeared from Plumas County, near the massive Dixie fire.

The main grist for Elder’s attack came from a media report that showed the governor had not adhered to his own goals for forest “management;” the thinning of trees and underbrush that experts agree is essential to curtailing the damage from disasters such as the Dixie fire, the second-largest fire in California history.

“He’s mismanaged the forests,” Elder said of Newsom. “He gave a figure that was off by a factor of seven as to how many acres of fallen trees and dry vegetation that he’s removed.”

That referred to a June investigation by CapRadio, a Sacramento public radio outlet.

“I have no idea why this isn’t being done.… When I become governor, we’re going to be implementing these commonsensical kinds of plans so that we can reduce the severity of these fires and save lives,” Elder said.

The public radio report found that Newsom claimed the state planned to remove fuel on 90,000 wildland acres but completed work on only a little more than 11,000 acres. CapRadio concluded that the governor “misrepresented his accomplishments and even disinvested in wildfire prevention.”

Vast tracts of California forest are managed by the federal government and both California and U.S. officials acknowledge they need to do a better job of removing trees and other combustible material before giant fires break out.

The state and feds, until recently directed by Trump, set a goal of “treating” 500,000 acres a year. But both local and federal officials have fallen far short of that goal.

Newsom tried to regain momentum on the issue this year by pledging some $1.5 billion in “wildfire resiliency” work — thinning overgrown forests, increasing prescribed burns and replanting trees. The governor’s staff has said he is taking an “all-hands-on-deck approach to the wildfire crisis.”

Experts expressed support for those promises but said they will be watching closely for follow-through.

Elder criticized the governor for releasing 20,000 prison inmates early because of the threat from the COVID-19 pandemic. He suggested the felons should have been left locked up and would have provided manpower to fight the forest fires.

He also criticized the massive shift at Pacific Gas & Electric, one of the state’ biggest utilities, to power derived from renewable sources. Elder said the spending on wind and solar power left “less money for removing trees and putting power lines underground; the kinds of things that would have made these fires less intense.”

Newsom has taken a full-speed-ahead approach on the adoption of renewable fuels, electric vehicles and other reforms to reduce California’s carbon footprint. Although Newsom constantly talks about climate change as driving the wildfire crisis, Elder did not mention global warming during his news conference.

“Do Californians really want to put someone who denied global warming in charge of fighting wildfires?” said Nathan Click, a spokesman for the anti-recall campaign. (Although Elder previously cast doubt on the reality of climate change, he has more recently said he believes it is real, is caused by human activity and contributes to the severity of wildfires, but he has decried climate change “alarmism.”)

He again rejected the suggestion that he is a “Trump Republican,” citing two policies on which he disagreed with the former president (trade and leaving Afghanistan) and four others on which he said he aligned with Trump (immigration, economics, public school “choice” and the post-mortem pardoning of early 20th century heavyweight boxing champion Jack Johnson).

Concluded Elder: “For the most part, I thought that Donald Trump was a solid president.”

Anti-recall spokesman Click continued to hammer Elder as “the closest thing we have to Trump in California,” saying another of the Trump policies backed by Elder was the “horrific” immigration practice that separated families at the Mexican border.

Elder issued another sharp retort when a television reporter asked him about comments by fellow challenger Kevin Faulconer, the former mayor of San Diego, at a Tuesday night debate that Elder didn’t attend.

Faulconer suggested that Elder was weak on women’s issues, but Elder insisted that both the TV reporter and his fellow candidate had mischaracterized his previous writing on the subject.