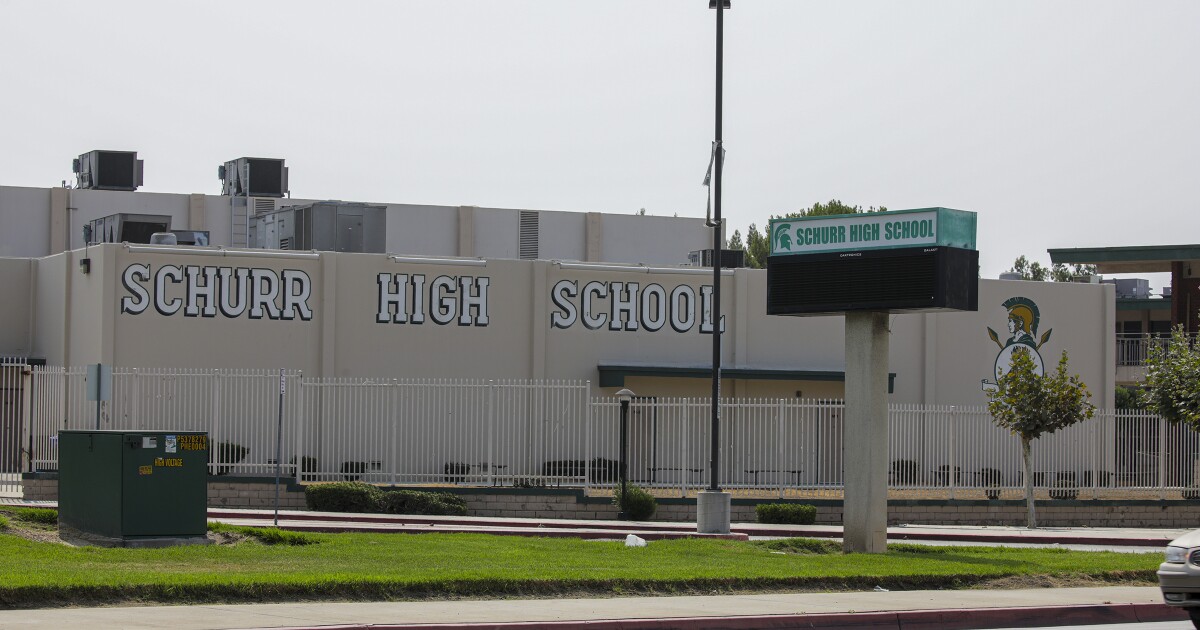 Teachers arrived at Schurr High School in Montebello last week to prepare their classrooms for opening Monday. But instead of arranging books and desks, they found a horrific scene: dead rats on the floor, rat nests in the cabinets, excrement on desks.

“There was feces in several places in my room,” said teacher Al Cuevas. “I could hear rats running around in the walls and ceiling. It’s disgusting. Other rooms right near me were completely taken over by rats.”

After being confronted with the teachers’ frustration and safety concerns, late Friday the school district — which never opened for in-person learning last school year — sent an email to parents of some 2,600 students that the campus would be closed for “the next couple of weeks.” In yet another education setback, students will be put on an independent study program.

About 90% of Schurr’s students are Latino and about 80% are from low-income families.

In this video provided to The Times, a rodent jumps from a shelf and scurries away in a classroom at Schurr High School in Montebello.

In addition to the rat infestation, teachers said the air conditioning system was not properly working in a building where many of the classrooms have no windows. This problem is especially acute as state COVID-19 safety measures recommend improved air ventilation systems.

Interim Supt. Mark Skvarna said the district should have done a better job identifying the problem in the run-up to reopening. Skvarna was hired in March, a few months after a fiscal analysis found that the district was at high risk of insolvency.

Skvarna said he made the decision to close the school largely out of concern that there might be rodent droppings or other health hazards in the HVAC ducts.

“Wonderful work being done preparing for a safe return!” read one post.

Some parents said the late-notice campus closure is especially painful because they and their teenagers have been pressing the district to reopen its doors since last spring, when all but a few Los Angeles County school districts reopened campuses. Montebello Unified, however, kept its doors closed all last school year, saying it was the safest decision.

“Here we go again, not going back,” said Sandra Torres, the mother of a 14-year-old special needs student who is supposed to start as a freshman this year at Schurr. “I’m so tired of so many setbacks.”

Zoom lessons were impossible for Torres’ son Diego, who needed constant help to stay on track. Midway into last year, she asked to move him to independent study, essentially becoming his teacher while also working long hours as an ICU nurse.

For a time, she considered pulling him out of the district if it did not open campuses, but when the district announced that it would reopen in the fall, she opted to stay.

Last week she began preparing Diego, to help him understand what his new routine would look like once he started on campus — taking the bus, wearing a mask, adjusting his therapy sessions.

On Friday afternoon, she even met with teachers and administrators who explained the plan for returning to school.

Hours later, she said, she saw on social media that the school would not be opening its doors. The initial statement from the school district said the closure was due to “construction and cleanup work.”

“I’m just upset and sad. And frustrated. And a little bit of everything,” Torres said. “More for Diego. He’s not just your typical 14-year-old…. Now he’s so confused about the whole thing: ‘I was supposed to start school. What’s going on?’”

Teachers say they have been complaining about rodents, the lack of working air conditioning and other maintenance problems for a long time.

“We’re talking even years back,” said teacher Paul Chavez. “It was a noticeable issue.”

He remembers teachers recounting being in meetings “and having rats fall out of the tile ceilings and scurry to the next classroom.”

As faculty president of the school, Chavez said he made sure the problem was brought to the attention of school administrators, custodians and the plant supervisor. They tried to address it, Chavez said, but he believes the district needed to do more.

“I just felt like band aids were put on this situation when a little bit more attention needed to be addressed,” he said.

In July, when Chavez returned to the school to help with summer school, his desk was “littered with rat feces,” he said.

He brought his shop vacuum from home to clean up the mess, then sanitized all the desks in the classroom, he said.

Then, last Monday, when more teachers returned to campus to prepare for the first day of school, he realized the situation was even worse than he thought.

“People were coming back into their classrooms and sharing with me that these conditions are horrific,” he said. “It was just a horrible situation…. A lot of people dug in and did a lot of the hard [cleanup] work themselves, which shouldn’t have happened. But we wanted to prepare for our students.”

Skvarna said he expects the school to reopen in 15 days. The exact details of the independent study program were unclear Tuesday afternoon.

Skvarna, who has been working as the district’s interim superintendent for about four months, said campuses have been neglected.

“We’re trying to get these facilities up to standards,” he said. “I don’t believe they were before. I believe we need to put effort and money into it. I don’t believe it’s been a priority.”

The district has for years faced fiscal troubles and other problems. In 2019, federal officials accused school officials of misleading investors in a $100-million bond sale.

“The tragedy here is for our students who haven’t been on the site for 18 months,” he said. “It should be a celebration, a welcoming. Instead they are losing out on valuable instructional minutes, and it’s a tragedy that our students are not getting what they deserve, what they have a right to, which is an education.”