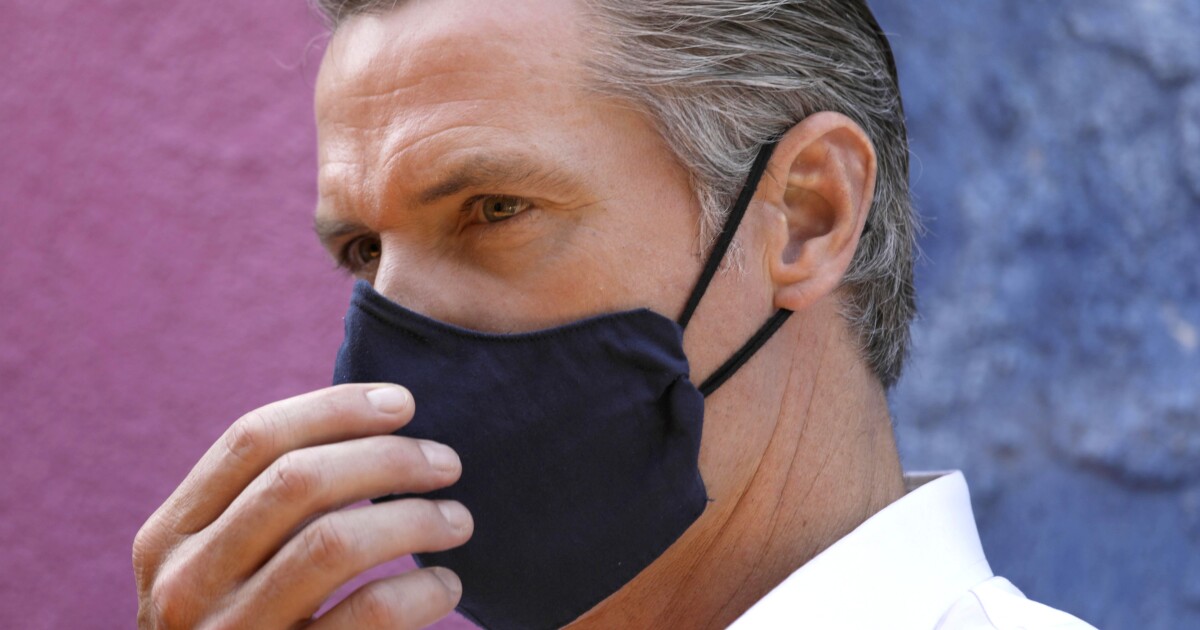 Republicans hoping to replace Gov. Gavin Newsom after the Sept. 14 recall election have vowed to rescind a series of statewide COVID-19 vaccination and mask mandates, and, given the broad executive authority granted to California governors, they almost certainly could make good on those promises if elected.

Should Newsom lose the election and a Republican take his place, GOP lawmakers and activists who have condemned the Democratic governor’s use of his sweeping powers would be poised to have a political ally in office who could wield those very same powers to implement their own policies.

A new Republican governor may decide to follow the lead of those in Texas and Florida and issue executive orders banning mask mandates in defiance of masking requirements enacted by counties, cities and school districts. But any attempt to do so could be blocked by the Democrats who control the California Legislature and challenged in court, as is currently happening in those two states.

Conservative talk-show host Larry Elder, who recent polls show leads the field of candidates running to replace Newsom if he’s ousted, has promised to take quick action to undo Newsom’s policies. During a news conference on Friday, he called mask mandates an “assault on freedom.”

“When I win I will fight any and all vaccine and mask govt mandates at state and local level,” Elder tweeted to his followers.

Elder’s comment came shortly after San Francisco decided to require proof of full vaccination against COVID-19 for restaurants, bars, gyms and other indoor venues. The Los Angeles City Council on Wednesday called for a similar ordinance.

“I have consistently urged my fellow Californians to join me in getting vaccinated, but mandates are not the solution,” Faulconer said in a statement Wednesday.

At a GOP debate the week before, when Faulconer was asked if he would take action as governor to ban mask mandates at schools as Republican Gov. Ron DeSantis has done in Florida, he sidestepped the question.

“We must draw the line and protect people’s freedoms,” Cox said.

Any incoming governor would have the ability to replace the leaders of California’s public health agencies. That includes the director of the state Public Health Office, which has been at the forefront of the Newsom administration’s COVID-19 response. Under California law, the state public health officer has wide-reaching authority to respond to the pandemic and “may take measures as are necessary to ascertain the nature of the disease and prevent its spread.”

All of Newsom’s recent mandates on mask-wearing and vaccinations were orders by Newsom’s public health officer — not executive orders by the governor.

While the Democratic Legislature would have the ability to block the confirmation of a new governor’s public health nominees, those posts could be filled while lawmakers are in recess between mid-September and the beginning of January. The nominee will have the full powers of the office before the official nomination hearing and the ability to change or rescind all current state mask and vaccination mandates.

“The state public health officer has the authority to modify or remove any order done by a county health officer,” said Smith, who has degrees in both law and medicine. “Now, they almost never do it because they function as a team. But it’s possible to do.”

Still, any attempt by a new governor or member of the administration to change a local public health order to be less restrictive is almost guaranteed to be challenged in court, Smith said.

Constitutional law professor Leslie Jacobs, director of the University of the Pacific McGeorge School of Law‘s Capital Center for Law & Policy, said California’s governor has “enormous powers” during a state of emergency. Jacobs said she hopes that responsibility would humble any new governor, but said that has not been the case in other states.

“There is broad discretion in the governor to make judgments and there are governors in other states who are imposing these mask bans,” Jacobs said. “There’s also the possibility that whoever assumes office will understand they’re in a public trust, and will behave in a way that isn’t subverting what would presumably be the will of the California people as far as public health goes.”

Under the Emergency Services Act, the governor has broad authority to respond during a state of emergency such as a pandemic.

The governor can “make, amend, and rescind” state regulations and suspend state statutes, and has the power to redirect state funds to help in an emergency, even funds appropriated by the California Legislature for an entirely different purpose. The governor also has the authority to commandeer private property, including hospitals, medical labs, hotels and motels.

The governor’s emergency authority, however, must be used to “mitigate” the effects of a natural or man-made emergency, and an order that might make a crisis worse — including banning mask and vaccination mandates — might not survive a court challenge, Jacobs said.

Elder has expressed a desire to wield his emergency powers in different ways, saying that he might declare a state of emergency in order to fire “bad” public school teachers.

Kiley has vowed to do the opposite. He said one of his first acts as governor would be to terminate the state of emergency Newsom declared because of the pandemic.

“I’m totally against mandates of any form. I think it’s an issue of personal freedom,” Kiley said. “Unfortunately, this governor has gotten it completely backwards.”

Kiley joined fellow Republican Assemblyman James Gallagher of Yuba City in challenging Newsom’s use of emergency powers during the pandemic, initially receiving a favorable ruling in a Sutter County court that was later overturned.

The appellate court ruling found that the governor has the constitutional authority to enact laws during an emergency — a ruling that could open the door for a new governor to ban mask mandates and take other sweeping action without legislative approval.

That same court ruling, however, emphasized that there is a pivotal check on the governor’s power to declare an emergency. The state Legislature has the authority to terminate a state of emergency with a simple majority vote in both the Senate and Assembly.

In February, Republican state lawmakers filed a resolution to terminate the state of emergency Newsom declared, saying the “open-ended state of emergency, with boundless powers vested in a chief executive, is incompatible with democratic government.”

The Legislature’s Democratic leadership has chosen not to exercise that option while Newsom has been in office.

But “if [the governor] started declaring bizarre emergencies, the Legislature is back there to say no,” Jacobs said.

How kids can stay safer at school despite Delta variant threat