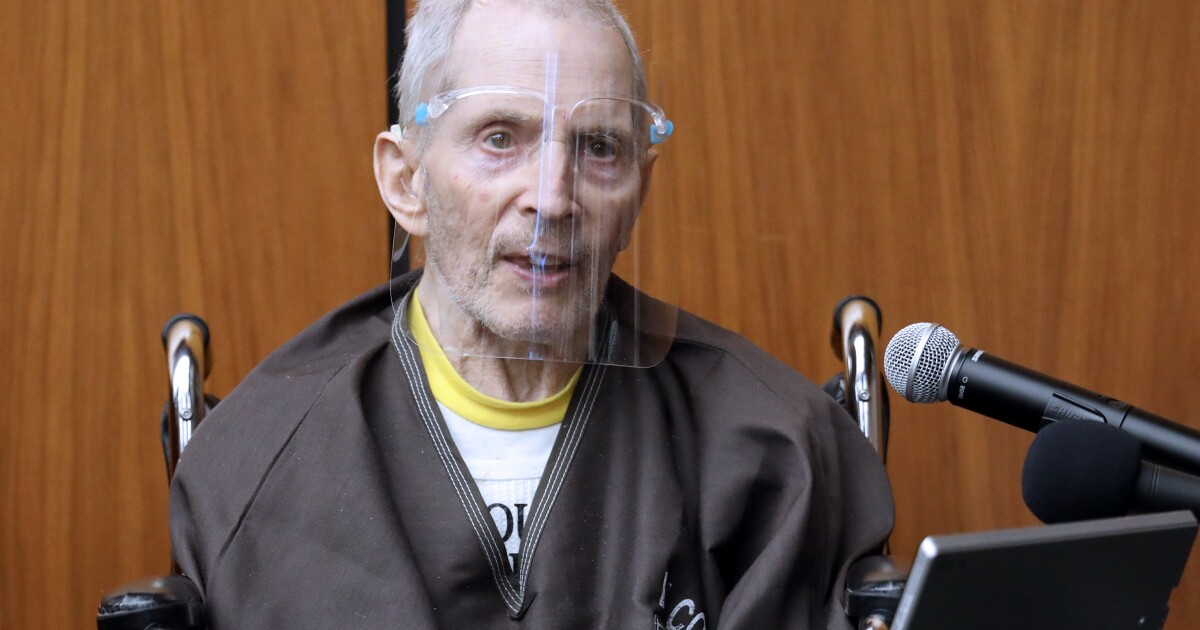 After years spent denying it, Robert Durst admitted in court Monday he authored a critical piece of evidence in his Los Angeles trial — the so-called cadaver note — after discovering the body of the woman he is now charged with killing, Susan Berman.

Durst, 78, testified last week that he and Berman had planned a Christmas “staycation” in Los Angeles and that he was traveling to see her the week she was killed. On Monday morning, he described arriving at her house in December 2000 and entering using a key she had mailed him, only to find his decades-long confidante bleeding on the floor a short time later.

“I did a double take. I saw Susan lying on the floor,” he said. “I shouted ‘Susan!’ a couple of times, then I quickly ran to the bedroom where she was. Her eyes were closed.”

Durst said after checking to see if Berman had a pulse and trying to lift her off the floor, he ran to another room to call 911 but claimed the phone line was not working. After that, he said he left the home and tried to contact authorities from a pay phone on Sunset Boulevard, roughly two miles away.

But when an operator answered his call from the pay phone, Durst said he started to have reservations.

“I decided I did not want to give them my name,” he said. “I was aware that my voice is very recognizable even without a name.”

Durst said he instead opted to write what has come to be known as the “cadaver note” — a scrap of paper containing only Berman’s address on Benedict Canyon Drive and the word “cadaver” — and mailed it to the Beverly Hills Police Department. Under questioning from his lead defense attorney, Dick DeGuerin, Durst admitted he had lied about authoring the note repeatedly over the years, including during interviews for the HBO documentary series “The Jinx.”

“It’s a very difficult thing to believe,” he said Monday. “I mean I have difficulty believing it myself, that I would write the letter if I had not killed Susan Berman.”

The note triggered a key moment in “The Jinx.” After being confronted with a letter Durst supposedly wrote to Berman in 1999 that contained the same misspelling of the word “Beverly” that appeared on the “cadaver note,” Durst walked into a restroom.

Unaware he was still being recorded, he muttered the phrase “killed them all, of course,” which many have taken as a confession.

The note has also been a key part of the Los Angeles Police Department’s investigations into Durst for nearly two decades. In 2002, detectives obtained a writing sample from Durst under a judge’s order. The real estate heir scribbled the words “BEVERLEY HILLS POLICE,” “1527 BENEDICT CANYON” and “CADAVER,” for comparison to the only phrases contained in the “cadaver note.”

Durst’s legal team first acknowledged he would admit he was at the scene of Berman’s murder and wrote the “cadaver note” in court papers filed in late 2019. The move marked an abrupt reversal, after the defense had spent years attempting to block testimony from handwriting experts who might be able to confirm Durst penned the cryptic message.

At the time, Durst’s attorneys called it a “strategic decision” but did not elaborate.

DeGuerin also repeatedly sought to undercut the prosecution’s theory of the crime Monday: that Durst killed Berman to wall off a resurgent investigation into the 1982 disappearance of his wife, Kathleen. Prosecutors have long argued Berman knew Durst killed his first wife and had helped him concoct a false alibi in the case.

On Monday, DeGuerin asked Durst several times if Berman had anything to blackmail him with.

Durst also said he knew Berman was cooperating with the renewed investigation being conducted by prosecutors in Westchester County, N.Y., but claimed he was not worried about it.

DeGuerin is expected to continue questioning Durst into Tuesday, and prosecutors will likely cross-examine the defendant for several days.