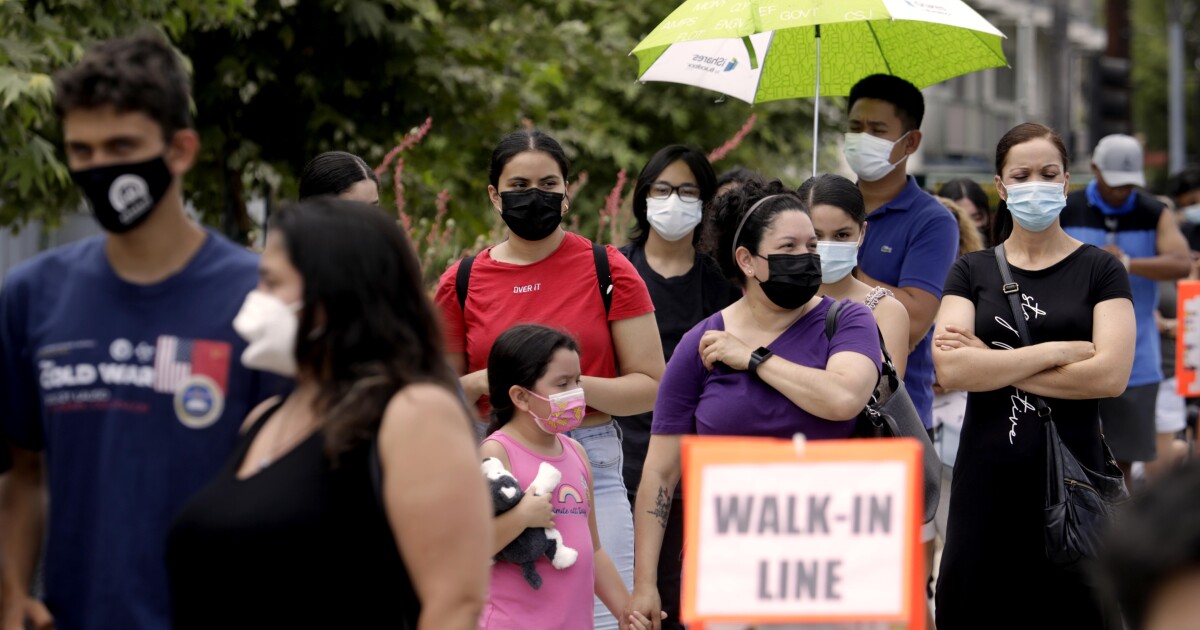 Los Angeles County officials on Sunday continued to report a surge in coronavirus cases as schools prepared to open.

The Department of Public Health on Sunday recorded 3,356 new cases of the virus and eight related deaths but said the real number is likely higher due to weekend reporting delays.

There were 1,653 COVID-19 patients in county hospitals as of Saturday, an increase of nearly 51% from two weeks before, when there were 1,096 patients.

Officials said last week that the surge fueled by the highly transmissible Delta variant is showing some signs of slowing in L.A. County, but that cases are likely to continue rising in the weeks ahead, in part due to ramped-up testing as schools, colleges and universities welcome students back for the new term.

Some institutions are requiring regular testing, making it more likely that asymptomatic infections that would have otherwise gone undetected will be identified.

Gov. Gavin Newsom has ordered that all California school employees must be vaccinated or submit to a weekly test. L.A. Unified, whose schools open Monday, has gone a step further and is requiring weekly testing of all students and employees, whether or not they are vaccinated.

Due to the increase in testing, health officials said, a more revealing metric of the county’s progress against the surge is the positivity rate, the proportion of conducted tests that return a positive result.

As of Saturday, the county’s daily test positivity rate was 3.96%, down from 4.8% the Saturday before and from 4.4% Tuesday, according to the public health department.

In addition, unvaccinated people are still almost four times more likely to become infected as those who are vaccinated, according to the public health department.

Man stabbed at anti-vax rally in L.A. is released from hospital