One person stabbed as COVID anti-vaxxers and counterdemonstrators clash in front of L.A. City Hall 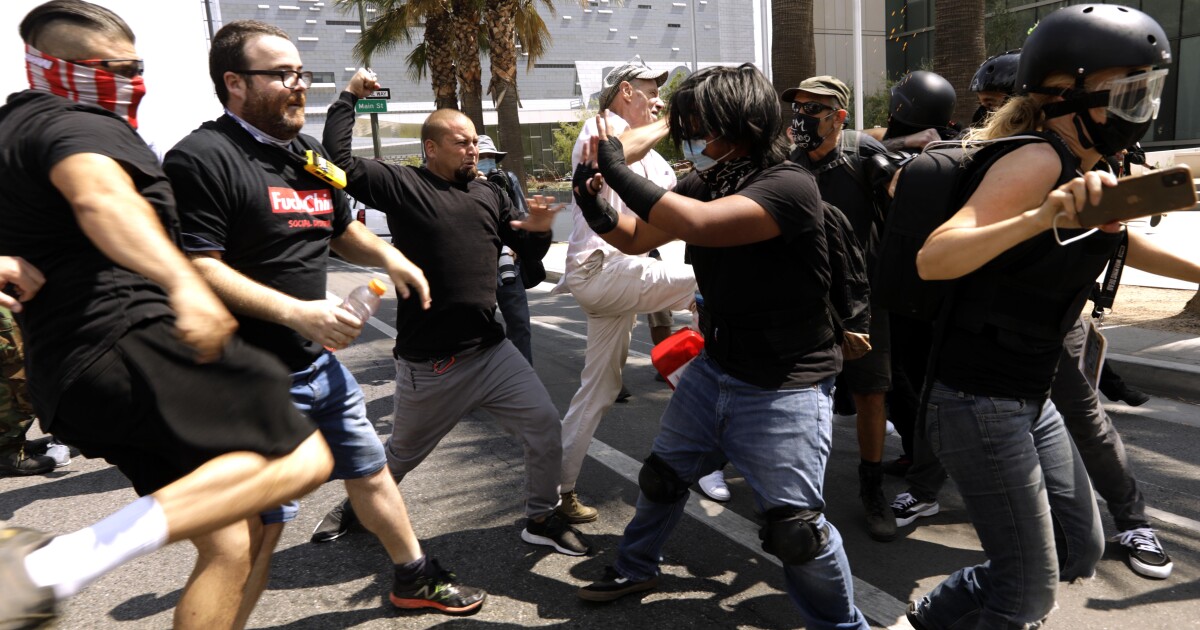 An anti-vaccine rally at Los Angeles City Hall turned violent Saturday, with one person stabbed and a reporter saying he was assaulted, according to police and protesters on the scene.

A crowd of several hundred people, many holding American flags and signs calling for “medical freedom,” had descended on City Hall around 2 p.m. for the planned rally. A few dozen counterprotesters had amassed on 1st Street near the former offices of the L.A. Times before the clash.

A fight erupted on the corner of 1st and Spring streets shortly after 2:30 p.m., as counterprotesters in all black and anti-vaccine demonstrators draped in American flag garb and Trump memorabilia traded punches and threw things at one another. It was not immediately clear how the fight started, though each side quickly blamed the other.

One person, who the anti-mask protesters claim was part of their rally, could be seen collapsed in the intersection, bleeding. Police on the scene said the person had been stabbed, and paramedics arrived to take him to a hospital.

In the melee, counterprotesters could be seen spraying mace while members of the anti-vaccine rally screamed death threats. One older man screamed “unmask them all” and clawed at a woman’s face.

“We are on scene to maintain order after a fight broke out between Antifa and people gathered for the permitted event. We are aware of one male that was stabbed and is being treated by Fire Department personnel,” Spell said in a statement. “No arrests have been made but [the] investigation is ongoing.”

Spell could not immediately provide an update on the victim’s injuries. While the statement referred to “Antifa,” the counterprotesters appeared to be a mixture of people who have shown up to oppose anti-vaccine and anti-mask rallies in recent months.

A short time later, KPCC reporter Frank Stolze could be seen walking out of the park near City Hall being screamed at by anti-mask protesters. One man could be seen kicking him. Stolze later told a police officer he had been assaulted while trying to conduct an interview. Spell confirmed that a police report was taken.

He later tweeted this statement: “Something happened to me today that’s never happened in 30 yrs of reporting. In LA. ⁦@LAist⁩ I was shoved, kicked and my eyeglasses were ripped off of my face by a group of guys at a protest – outside City Hall during an anti-vax Recall ⁦@GavinNewsom⁩ Pro Trump rally.”

By late afternoon, a small crowd of counterprotesters, mostly dressed in all black, remained near LAPD headquarters, but police had formed skirmish lines to separate the two crowds.

The demonstrators had billed the rally as a stand against rules requiring COVID-19 vaccinations and so-called vaccine passports and said they also opposed wearing masks. A flier advertising the counterdemonstration decried the group as fascists.

There is no blanket rule mandating that people get vaccinated in California, but some cities have or are considering requiring proof of vaccination to enter certain businesses. New York City became the first major city to do so earlier this month, followed by San Francisco and New Orleans.

Earlier this week, the Los Angeles City Council voted to direct city attorneys to draft a law that would require people to have at least one dose of a vaccine to visit indoor restaurants, bars, gyms, shops and movie theaters. Much of the plan has yet to be worked out, and the full City Council still must approve the proposed law after it’s written up.