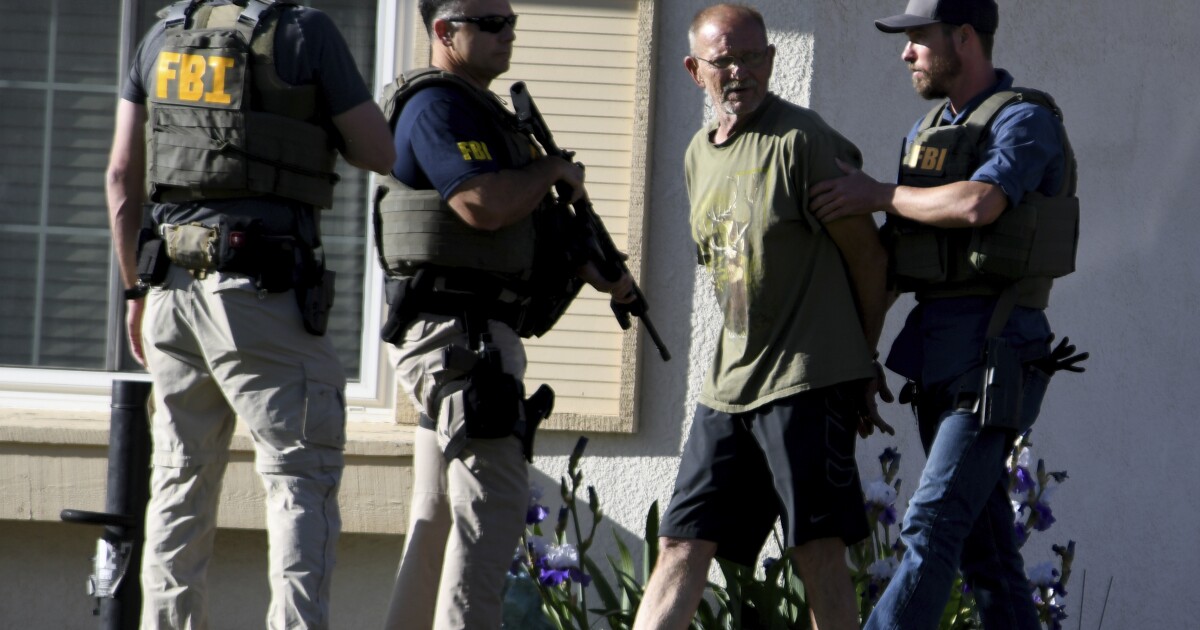 The former mayor of Adelanto, who led an ambitious push to turn the high desert into a center for marijuana business, was arrested Friday and charged with accepting bribes and kickbacks from cannabis operators.

Rich Kerr, 64, was taken into federal custody without incident Friday morning as prosecutors unsealed an indictment that includes seven counts of honest services wire fraud and two counts of bribery.

Kerr is accused of accepting more than $57,000 in illicit payments from business people in exchange for his help making sure they received the permits and licenses needed to run various marijuana operations in the town. The money, prosecutors alleged, was disguised by Kerr and his co-schemers as gifts, donations to a charitable fund or Kerr’s election campaign, and other ruses.

Kerr, who served as Adelanto’s mayor from 2014 to 2018, came under suspicion of authorities while still in office. In 2018, federal agents served search warrants on Kerr’s home, City Hall and a local marijuana dispensary. Kerr is the second elected official from Adelanto to be accused of accepting bribes for fast tracking marijuana businesses. In 2017, then-Mayor Pro Tem Jermaine Wright was charged with a similar scheme.

As mayor, Kerr was a strong proponent of opening the city to legal marijuana operations. He voted to allow marijuana cultivation in the city, medical marijuana dispensaries to operate, and an array of other commercial marijuana activities, according to the indictment. His support, prosecutors allege, stemmed at least in part from his desire to enrich himself.

According to an indictment issued by a grand jury this week, Kerr exploited his role as mayor to vote to approve city ordinances that helped the people paying him and served on Adelanto’s Cannabis Dispensary Permit Committee, which determined the number of permits that would be issued and which applicants would receive them.

Prosecutors did not name the people who were allegedly bribing and scheming with Kerr. One of them is a lawyer who was identified in the indictment as “Person A.” Two others, “Person C and “Person D,” had stakes in businesses in the city, including those involving marijuana cultivation, prosecutors said.

At a meeting in November 2016, the Adelanto City Council discussed a proposed ordinance that would help determine where medical marijuana dispensaries would be located. The initial proposal called for two zones would have excluded a former restaurant purchased two months earlier by Person A and his spouse.

During the council’s discussion, Kerr successfully pushed to change the boundaries to include the old restuarant. The plans Person A and his wife submitted to the city called for the building to be renovated with “elongated sales counters,” a “dispensing room,” “cashier,” and “security room,” the indictment alleges. It was unclear from the indictment whether it ever opened as a dispensary.

The following month, Kerr deposited a $5,000 check dated with the same day as the council meeting from a real estate trust account controlled by Person A, according to the indictment. The check’s memo line read, “ADV XMAS FUND.”

The following May, Kerr voted twice on city marijuana rules to assist Person A, the indictment alleges, and received three $10,000 checks from Person A’s law firm that year. The memo lines of each check stated, “ADVANCE.”

In total, Kerr accepted at least $57,500 in bribes and kickbacks from Person A, Person C and others, prosecutors allege.

LAUSD orders all teachers, staff to get COVID-19 vaccine