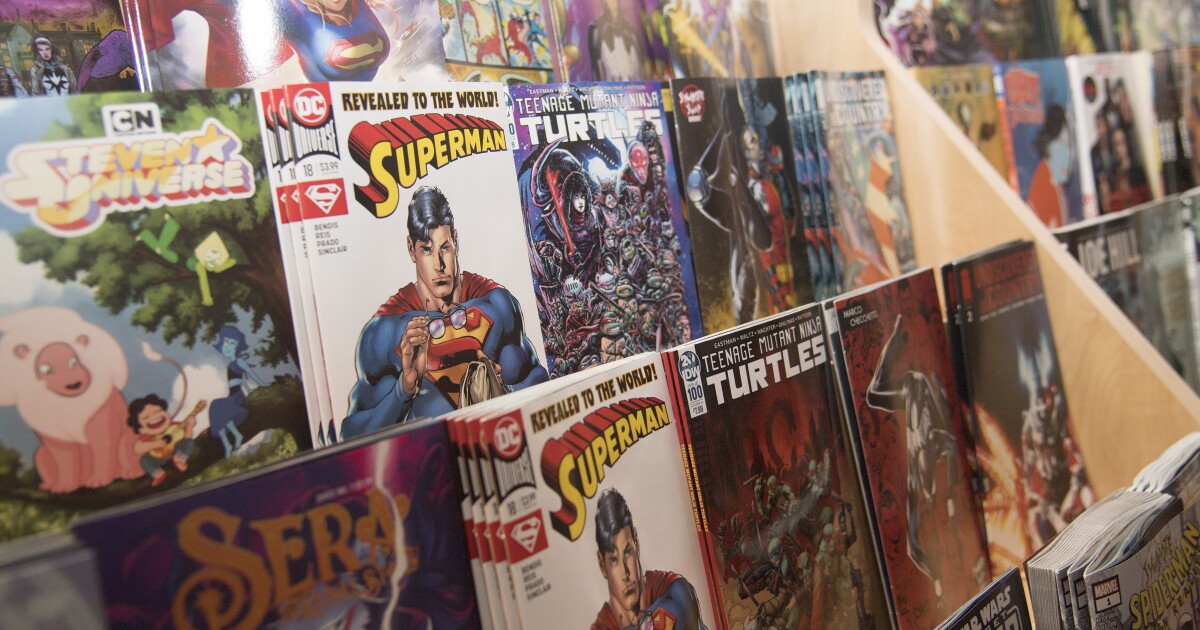 Only the biggest real-life super villain of them all, COVID-19, could delay Free Comic Book Day. For the second consecutive year in its 20-year history, the event didn’t happen in its traditional window, the first week of May. Last year, pandemic forces pushed the organizers to transform Free Comic Book Day into Free Comic Book Summer, with different free titles released over nine weeks in July and August to accommodate social distancing in stores. This year, the event is once again a single-day happening in most shops, delayed to to Saturday, Aug. 14, although some shops have expanded the celebration to two days.

Administered by a panel representing comic book retailers, publishers, suppliers and Diamond Comic Distributors, Free Comic Book Day has always been a major undertaking, with millions of comics given away worldwide each year. Diamond handles logistics for the event, shipping comics to shops and providing marketing and PR. Though organized by the comics industry, movie studios have often used the event to jumpstart or continue publicity campaigns, with summer releases such as “Spider-Man” in 2002 and “Venom” in 2018, usually coinciding with the celebration.

But this year some local comic book shops are doing more than the usual dispersal of titles and artist signings.

Comics Factory in Pasadena is one of many shops that is expanding the event into a two-day affair, making Sunday a kids’ day, and raising money for the Comic Book Legal Defense Fund and Comic Books for Kids, which gets comics into hospitals for children.

Activities are part of the main focus for Golden Apple Comics, a well-known comics shop in Hollywood. To help protect its customers, the majority of its books will be available outside in the parking lot rather than inside the store. And the shop is partnering with other businesses (a coffee shop, a butcher) to spread out the books with its neighbors, and maybe spread some of the financial love around as well. With games and prizes (a spinner rack!), popular artist signings (including “Stray Dogs” creator and “My Little Pony” artist Tony Fleecs), Golden Apple is inviting the kinds of crowds that could be daunting and make businesses second-guess their level of involvement.

“We weren’t hesitant at all to participate,” says Joe Annabi, ordering manager at Golden Apple. “All we wanted to do was make sure we still did something that was safe and fun.”

The event spills into periphery collectibles as well. Legacy Comics in Glendale will be a PokéStop, meaning it’s one of the hot spots Pokémon collectors go to for cards, items and general Pokémon Go activities. Along with the comics giveaways, Saturday also offers pre-release events for Evolving Skies, the newest Pokémon trading cards set.

During the shutdown, and for much of the last year, Legacy had to shift its business model, putting more emphasis into online sales.

“Initially it was tough during the pandemic. It’s like you post more stuff online, more stuff online sells,” says Olin Tellefsen, comics manager at Legacy Comics. “One of our challenges was finding places to put our things as business expanded.”

Tellefsen also echoes what most comics and collectible retailers saw with their customer base and hope to see more of in the current market.

“During the pandemic, people were isolated,” Tellefsen says. “They got back into their hobbies, which include comic books and trading cards.”

Free Comic Book Day hopes to encourage and build on that momentum. There is often a noticeable retention of new customers, even if it’s only for a few months. Publishers see this and have stepped up by offering new stories as well.

“Out of the 50-some-odd titles that we have, almost half of them are going to be new exclusive material. It’s created for Free Comic Book Day, and it’s not just for people who haven’t read comics,” says Huang.

“Financially, once we got into the swing of things [after a few years], Free Comic Book Day became our Black Friday. It’s the single biggest day of the year for us oftentimes. We do see some retention, and we try to foster that when they come back in.”

To do that, there are dozens of books being offered from a diverse range of publishers (see video above for titles or click here). Publishers have grown more savvy, but the audience is also more nuanced and knowledgeable about comics.

“Publishers have gotten better at this. They’re putting their ‘A game’ forth. It’s great for DC to put out Batman, but everybody knows Batman. Companies like Image and Boom! Studios, they have a lot of really great properties that aren’t as well known. To have them put out books that reach more casual readers beyond the standard capes and cowls books that you normally think of for comics, that’s where we see a lot of the excitement coming from.”

One person stabbed as COVID anti-vaxxers and counterdemonstrators clash in front of L.A. City Hall