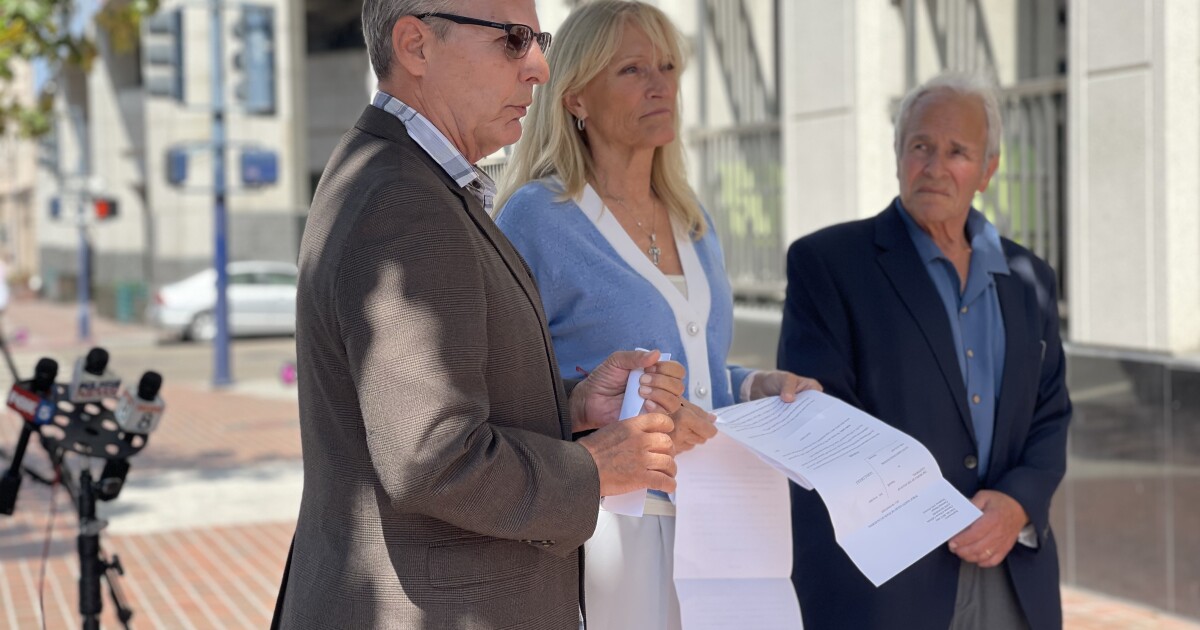 I got my sample ballot in the mail the other day and began perusing the list of candidates hoping to become governor if Gov. Gavin Newsom is recalled Sept. 14.

The list takes up three full columns of print. Forty-six people are in the race, most of whom I’ve never heard of. I don’t know what the idea is there. Maybe one day you tell the grandkids you ran for governor? Maybe you put “gubernatorial candidate” on your business cards, or figure you can profit form a leap in name recognition?

The list includes 24 Republicans, nine Democrats, two Greens, a Libertarian and 10 candidates with no party preference, all of them going after Newsom, a Democrat. There’s a farmer, a hairstylist, two entertainers, a couple of pastors and a retired homicide detective in the mix. If you don’t like what you see, there’s space for a write-in candidate.

Back in May, I wrote about the recall and expressed sympathy for the poor bear that was being used as a prop by Republican candidate John Cox, who said Newsom was a pretty boy and it was “time to unleash the beast.” That didn’t seem fair to the bear, and I dismissed the recall as a circus that would not fly in California.

We all have to admit our mistakes, and I’m here to say I was dead wrong.

According to a poll late last month, the governor could actually get dumped in a state dominated by Democrats. That’s because Dems and independent voters may be far less likely to vote than Republicans, 90% of whom expressed a high level of interest in the recall. The poll found that among likely voters, 50% opposed Newsom’s ouster while 47% supported it.

As if that isn’t a big enough headache for Newsom, a late entry in the race has immediately risen to the top of the field of recall candidates — talk show host Larry Elder. One poll found that the conservative Republican was favored by 18% of likely voters, topping his two nearest rivals by eight points. The sage from South-Central, as Elder calls himself, is also well-funded and has a built-in audience of longtime fans.

In a Zoom news conference on Friday, Elder clearly stated his boilerplate conservative views, blaming Newsom and left-wing policies for crime, homelessness and the high cost of housing, among other problems. And he said that as governor, he would immediately suspend mask and vaccination mandates.

Elder did not answer a question I asked about his candidacy, and I’ll get to that in a minute. But first, a few words about Newsom’s shortcomings, as well as my trip to a recall event Wednesday in Burbank and a walk-and-talk in Venice the next day with candidate Caitlyn Jenner.

As I’ve said before, Newsom has left himself open to criticism on any number of fronts, including those mentioned by Elder. The unemployment benefits scandal is another big weakness for Newsom, whose gaffes have included his tone-deaf and hypocritical dinner outing at a time when he was telling us to use our heads and be safe.

But in a trying time, given the pandemic, I’d say Newsom has been adequate enough that he should have been allowed to serve out a term to which he was elected by a landslide. He’s only got a little more than a year left, and if we don’t like him, that would be soon enough to give him the boot. We’re not talking New York Gov. Andrew Cuomo, who should have been locked out of his office if he hadn’t finally resigned.

On Wednesday in Burbank, I expected to see the pitchforks out at an event scheduled by Rescue California. But I got to the steps of the county courthouse and couldn’t find anyone.

I went for a walk and checked my email to make sure I was in the right place. After a while, a car pulled up and four people got out with recall literature and an “indictment” of Newsom for increases in crime rates, homelessness, prison releases and pardons, wildfires and other crimes.

That was it. Four people. Plus me, the only reporter. Is it possible the polls have got it wrong on recall support?

The four included Anne Hyde Dunsmore, leader of Rescue California, along with a press person and two fathers who lost their kids to brutal murders many years ago. One was Marc Klaas, whose 12-year-old daughter Polly was kidnapped and murdered in 1993 in Northern California, and the other was Steve Herr, whose 26-year-old son Sam and a friend were murdered in Orange County in 2010.

The convicted murderers were sentenced to death, and Klaas and Herr — both Democrats — support the recall largely because they believe Newsom ignored the will of voters in 2018, when he issued an executive order putting a moratorium on the death penalty. Newsom said at the time that capital punishment is “unevenly and unfairly applied to people of color, people with mental disabilities and people who cannot afford costly legal representation.”

I agree with Newsom, but I fully respect Klaas and Herr’s position.

On my way to Venice the next day, I hit a massive traffic jam on the 10 Freeway and thought about turning around. Caitlyn Jenner, former reality TV star and gold medal Olympian, has had no traction in the polls and has done little to distinguish herself as a candidate. But she was going to be talking about homelessness, and I wanted to see if there were any new ideas or strategies.

The short answer is no. I heard observations, not plans.

“We have to help people and we have to do it in a compassionate way,” Jenner said while passing homeless encampments during a walk and talk. She said the city needs to be cleaned up and the L.A. County sheriff’s controversial outreach should be expanded. If Newsom has budgeted billions to meet the challenge, Jenner said, “for a billion dollars, do you know how many RVs you could buy? How many containers you could buy?”

Yes, actually. Nowhere near enough to make much of a dent.

It’s no surprise that in this field of second-stringers as wannabe governors, Elder has surged. The lawyer and media personality is a sharp-tongued provocateur, for sure. It’s just that his politics make him better suited to lead a red state, not California.

As The Times reported, Elder has at times referred to global warming as a “crock” and a “myth.” He’s argued against the reality of a glass ceiling for women, called Roe vs. Wade one of the worst Supreme Court decisions ever, believes there should be no minimum wage, and promises to suspend the California Environmental Quality Act.

The cherry on top of that sundae is that Elder, who is Black, has been a steadfast supporter and apologist for Donald Trump, who among other achievements has been a hero to the nation’s white supremacists.

On Thursday, Elder spoke at a San Jose church that has been fined for defying coronavirus ordinances against gatherings. On Friday, he said he had gone to a Palm Desert coffee shop and was waited on by a young lady without a mask who said her boss did not require them. Elder asked if she was vaccinated and she said no. He asked why and she said, “I don’t feel like I need to give you a reason why.”

Shame on her? No. In Larry’s world, it’s hurray for her. There’s an assault on freedom, so let’s all respect the rights of others to contract and spread a virus that so far has killed 4 million or so people worldwide.

If this election doesn’t go well for Elder, he should consider a future run for governor in Texas or Florida. There’s a lot of mask and vaccine opposition there, and those two states are both getting hammered with surging infection rates while California remains below the national average.

In the virtual news conference Friday, I sent in a question for Elder, asking how a guy so out of step with the California majority and the sitting Legislature could expect to get anything done if he’s elected. Except, of course, for boosting his ratings, which may be all that Elder is after.

I got no answer, but I’m sure that for a GOP that has made itself all but irrelevant in California, bringing down a Democrat would be victory enough. And it could happen, because this recall raises the California crazy bar to new heights.

As argued in a New York Times op-ed co-authored by UC Berkeley School of Law Dean
Erwin Chemerinsky, if 10 million people vote in the recall, 5 million plus one could dump Newsom. If Elder holds his current 18% support among the replacement candidates and prevails, he could be elected governor with 1.8 million votes, despite 4,999,999 votes against recalling Newsom. Chemerinsky says that would be unconstitutional.

I’m making no predictions. It’s California, and there’s a month to go.