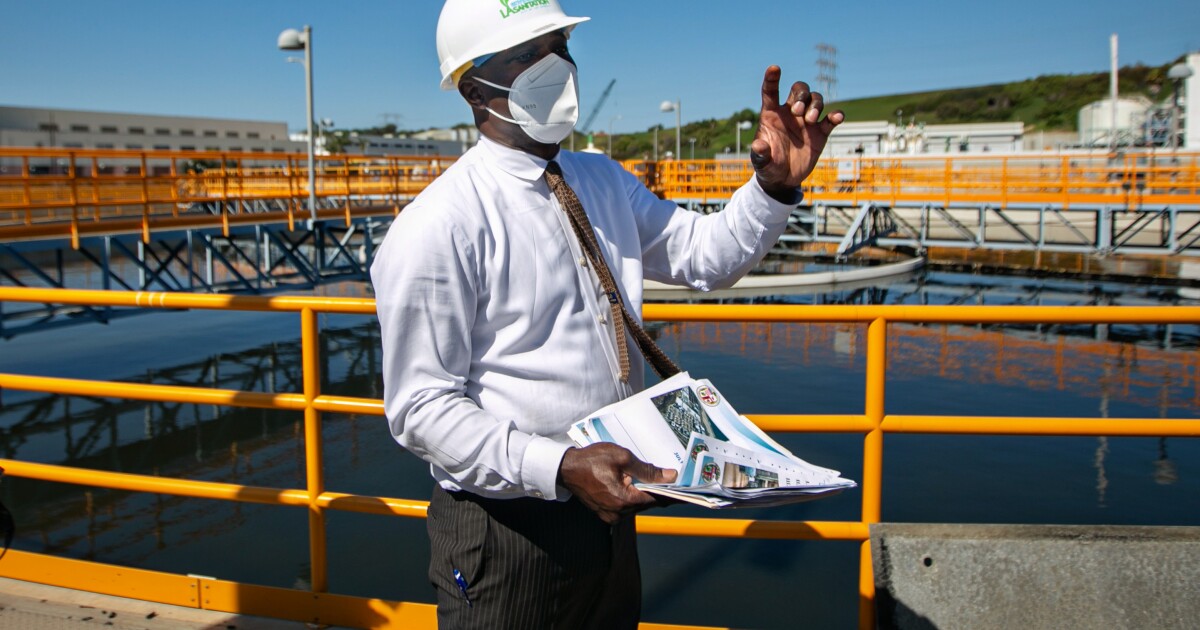 Even as California Gov. Gavin Newsom urges a voluntary 15% reduction in water usage, the Hyperion Water Reclamation Plant‘s inability to fully treat sewage has forced local officials to divert clean drinking water to uses normally served by recycled Hyperion water. Among those uses is an effort to protect coastal aquifers from seawater contamination, as well as the irrigation of parks, cemeteries and golf courses across southwest Los Angeles County.

The sudden loss of millions of gallons of recycled water has alarmed experts and raised new questions about the plant’s ability to function in a warming climate.

He and others describe the events at Hyperion on July 11 and 12 as a bad domino effect: widespread — and unexplained — flooding at the facility triggered one of the largest sewage spills in Santa Monica Bay in a decade and knocked out pumps and electrical equipment, causing the plant to continue discharging millions of gallons of partially treated wastewater into the ocean as well as creating problems with water recycling efforts.

“The chain reaction that occurred that day and the longevity of the impacts have been stunning,” said Mark Gold, an adjunct professor with UCLA’s Institute of the Environment & Sustainability.

Each day, the Hyperion plant sends a portion of its treated wastewater to a nearby facility operated by the West Basin Municipal Water District, where crews further treat the water so it can be used for irrigation and industry — a process critical to extending the region’s water supply.

But because of damage to key sewage treatment equipment, the Hyperion facility has been producing wastewater with excessive levels of solid particles, in violation of its environmental permit, records show.

As a result, West Basin crews have used millions of gallons of drinking water each day since July 15 — enough to supply about 4,000 average households for a year — to blend with recycled water, according to interviews with top officials from the agency.

Timeyin Dafeta, Hyperion’s executive plant manager, said the plant could resume normal operations before the end of the month.

“We want to learn from this and get to a better place,” Dafeta told reporters as he led a recent tour of the facility.

For three weeks, sludge built up in primary treatment tanks that hold tens of millions of gallons of wastewater, resulting in foul odors that led to headaches, burning eyes and skin rashes for neighbors in El Segundo, as well as causing the plant to violate its environmental permit, according to Dafeta.

Records show that the plant continues to violate permit requirements for solid particles and oxygen levels in its wastewater.

The latest figures for wastewater discharge show that the plant was meeting its permit requirements for solids that settle at the bottom of the water. However, the most recent average weekly level for solids suspended in the water, posted Saturday, was still more than four times above the allowable limit, according to the records on the Hyperion website.

The solid particle levels have been the main problem for West Basin, which provides drinking water and recycled water to 17 cities and unincorporated areas in the county.

The wholesaler purchases wastewater from Hyperion and operates a pumping station at the plant, directing the water through a three-mile pipe to its Edward C. Little Water Recycling Facility in El Segundo.

Last year at this time, West Basin was pumping approximately 38 million gallons a day from Hyperion, but the diminished quality of the wastewater has required additional treatment measures, forcing the agency to cut back to about 13 million gallons daily since July 15, according to West Basin officials.

West Basin crews have had to use more chemicals to treat the water and remove sediment, but that has created problems with turbidity, or water clarity, said Barkev Meserlian, executive manager of engineering and operations for the water district.

Last year at this time, an average of three to four dump trucks a day hauled away solids removed from the wastewater at the West Basin recycling plant. Currently, six truckloads a day are taking away solids, even though crews are recycling about one-third the amount of Hyperion wastewater, according to officials with West Basin.

The complications, he said, have resulted in the West Basin district repeatedly violating its permit level for turbidity since July 30.

The agency began relying on drinking water around the same time it declared a level-one water shortage, urging customers to voluntarily conserve water because of the increasing severity of the drought.

Acting General Manager E.J. Caldwell said the West Basin district has had no choice but to purchase millions of gallons of drinking water to blend with its recycled water — costing the agency nearly $500,000.

“At this point,” Caldwell said, “we need to do what needs to be done.”

As a result of the poor quality of the Hyperion wastewater, West Basin has stopped producing millions of gallons of purified, or drinking-quality, water for use in a seawater barrier project operated by Los Angeles County.

High-pressure pumps inject the purified water into the ground along the coastline, stretching roughly from El Segundo to the Palos Verdes Peninsula. The injected water creates a barrier that prevents salt water from seeping into a huge aquifer, according to water officials. County officials say they have used about 260 million gallons of drinking water to replace the recycled water.

Even though a month has passed since the Hyperion incident, sanitation officials have been unable to determine the cause of a sudden and unexpected deluge of sewage, which triggered a massive failure of eight huge bar screens — each 22 feet tall and 9 feet wide — that rake the incoming sewage and remove materials such as plastics, paper and other objects.

The breakdown resulted in sewage flooding about half of the plant, which sits on about 145 acres in Playa del Rey across from Dockweiler Beach.

Crews scrambled for their lives as the sewage water overran the building housing the bar screens and flooded other buildings, including a two-story pumping structure that filled with sewage water.

To avoid a much larger environmental disaster, officials say, sanitation crews directed about 17 million gallons of raw sewage through a one-mile pipe into the waters off Dockweiler and El Segundo beaches during an emergency operation that lasted about 12 hours.

Sanitation officials said Hyperion is capable of handling more than three times the 260 million gallons of sewage that flowed into the plant the day of the flooding. Officials also note on the Hyperion website that the screening bars have removed a bowling ball, a 17-foot utility pole and even a motorcycle.

Experts say one of the most troubling aspects is that the plant was overwhelmed on a warm summer afternoon when sewage flows were low.

The breakdown raises questions about whether the facility will be able to handle deluges resulting from heavy downpours, which are expected to increase as climate change continues to alter weather patterns, experts say.

In the past five years, the city has invested $1.2 billion in improving the entire sewage treatment system and more than $550,000 to upgrade the Hyperion plant, according to sanitation officials. The bar screens that failed were installed just two years ago.

Gold of UCLA said it’s difficult to understand why the flooding occurred, given the upgrades to the system.

“What happened at that facility was just an absolute utter shock to me,” he said.

Sanitation officials initially told The Times that flooding was caused by construction material, including concrete and wood, but they said in a statement this week that “the majority of the materials could be characterized as trash.”

Using cameras, the crews are trying to find out what caused the flood of large debris, said Minamide. She added that the city is hiring an outside firm to assist with the investigation and prepare a report in the next several months.

“Hopefully we’ll get something that will clue us in,” Minamide said