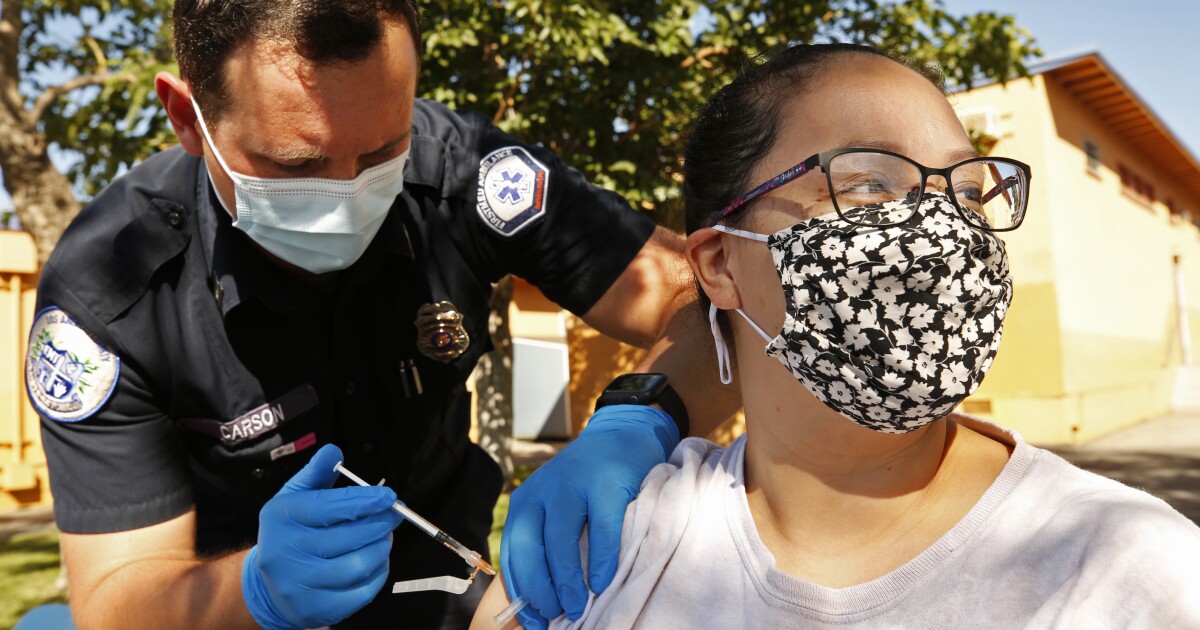 The rate at which coronavirus tests are coming back positive has fallen in the last week in Los Angeles County but is expected to rise further in Orange County.

In Los Angeles County, the so-called positivity rate is 4.4%, Public Health Director Barbara Ferrer said Tuesday, a decrease from the previous week, when the positive test rate was 6.6%.

“We do expect and anticipate that positivity [rates] will continue to rise,” Chinsio-Kwong told reporters in a briefing.

Los Angeles County is one of the few counties in Southern California that has ordered that masks be worn in indoor public settings by anyone 2 or older, regardless of vaccination status. Orange County, meanwhile, recommends, but does not require, universal masking.

Officials in Orange County expressed continued concern about the trajectory of COVID-19 hospitalizations in California’s third most populous county.

There continue to be increases in the amount of time ambulances are waiting to drop off patients at emergency departments, as well as the number of hospitals requesting that ambulances be diverted to neighboring emergency rooms because they’re already crowded, said Dr. Carl Schultz, medical director for the Orange County Emergency Medical Services Division.

The requests to divert ambulance patients from hospitals was equivalent to 25% of Orange County’s hospitals being closed over a 24-hour period, Schultz said.

Nine Orange County hospitals reported that it was taking more than an hour for many patients to be offloaded from ambulances to emergency rooms, Schultz said.

“So the trend is … not good. It’s continuing to slowly get worse,” Schultz said. “It’s a steady increase, and we’re starting to make plans for what we will do if this doesn’t abate.

“We now really have to start thinking about what are we going to do if it doesn’t get any better,” Schultz said.

For now, however, the level of overcrowding means that people with minor injuries and illnesses must wait longer to receive care. But so far, Schultz said, Orange County’s hospitals are still able to provide critically ill people prompt attention.

Hospital crowding is still not as bad as it was last winter, Schultz said. And Orange County is not in a position where officials are urging hospitals to cancel elective, or scheduled, surgeries.

“We are a long ways from that,” Schultz said. “One of the things that might more likely happen if things got worse is that hospitals might reduce the number of elective surgeries that they do.”

The issue with Orange County’s hospitals isn’t beds or space but medical staff, Schultz said. “By slightly reducing elective surgeries, it would perhaps free up some staff to be used elsewhere in the hospital,” Schultz said.

Most hospitals in Orange County are functioning close to standard capacity, Schultz said. “Some of them are starting to open up tents to help offload some of the burden on emergency departments,” Schultz said.

There were 27 children hospitalized in July at Children’s Hospital of Orange County who had COVID-19, Dr. Matthew Zahn, medical director of the county’s Communicable Disease Control Division, said Monday.

The best way to protect children younger than 12, who are too young to be immunized, is to get everyone in the family vaccinated as soon as possible, Chinsio-Kwong said. And for children returning to school, she said, they will be required to wear a mask in indoor settings.

“Everybody needs to universally mask indoors” at schools, Chinsio-Kwong said.

At Tuesday’s news briefing, Foley also expressed concern over a recent diagnosis of COVID-19 psychosis in an Orange County teenager who had been diagnosed with multisystem inflammatory syndrome in children, as reported earlier this week by KCBS-TV. A report published in the journal JAMA Neurology earlier this year said that in a study of 1,695 patients age 21 or younger who were hospitalized for MIS-C, 365 had neurologic problems. Of them, 43 developed life-threatening disorders, and 11 died.

The syndrome is a rare condition associated with COVID-19 that can develop in children and cause different parts of the body to become inflamed, such as the heart, lungs, kidneys, brain, skin, eyes, or gastrointestinal organs, according to the U.S. Centers for Disease Control and Prevention.

“It can be actually very scary for parents,” Chinsio-Kwong said, and requires immediate, specialized health treatment.