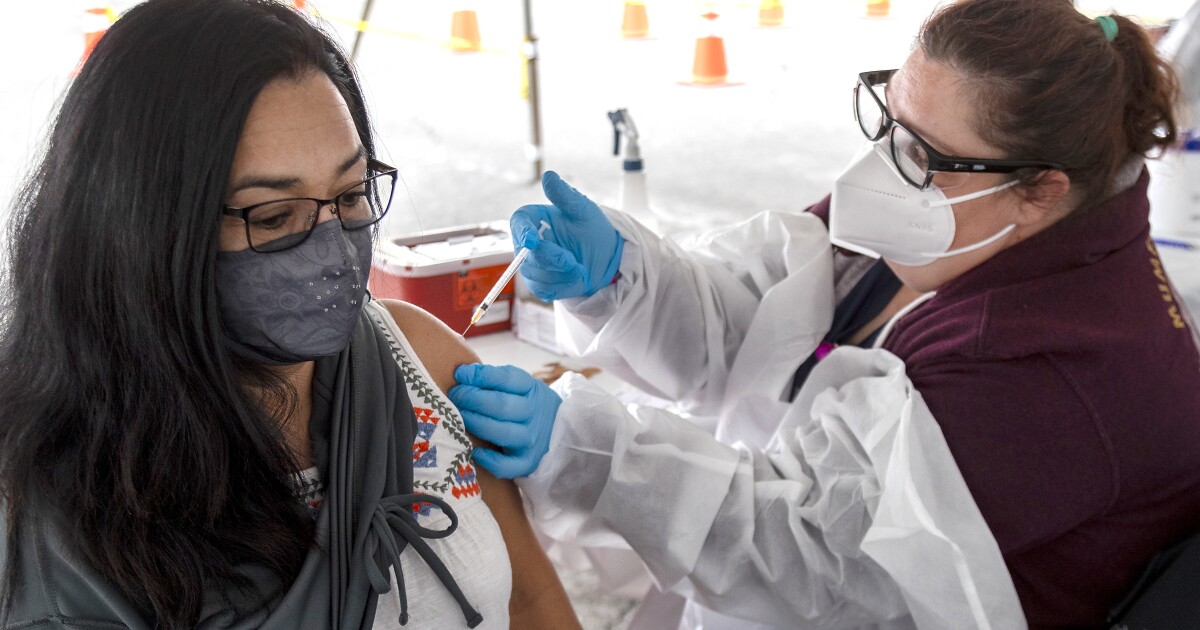 California school employees must either be vaccinated against COVID or submit to a regular test proving they are not infected with the coronavirus under a pending order from Gov. Gavin Newsom, sources told the Times Tuesday night.

Representatives of the Newsom administration briefly discussed the basic outlines of the plan with educators, according to two sources who said Tuesday that they were not authorized to speak publicly in advance of Newsom’s formal announcement.

Newsom had already announced a similar policy for employees of state agencies and an absolute mandate, with limited religious and medical exceptions, for state healthcare workers.

The governor is scheduled to visit an Alameda County elementary school on Wednesday, where details of the proposal are expected to be unveiled. A spokesperson for Newsom declined to comment Tuesday night on the event or the announcement. The proposal was first reported Tuesday night by Politico.

A stronger, statewide vaccine effort for school employees is expected to be welcome news for many of the groups representing those workers. The California Teachers Assn. has said 90% or more of its members have reported they are already vaccinated against COVID-19, and the union pushed hard for early access over the winter to doses of the vaccine.

Los Angeles Unified, the state’s largest school system, has gone further than the pending state policy in terms of requiring testing. While the state will require only the unvaccinated to submit to regular testing, L.A. Unified requires weekly testing of all students and employees, whether or not they are vaccinated.

Officials took this step because of evidence indicating that vaccinated people can catch and transmit the highly contagious Delta variant. The L.A. Unified testing plan will require collecting and processing about 100,000 tests per day.

The president of the L.A. teachers union, Cecily Myart-Cruz, has said teachers should be prepared for a possible vaccine mandate in the future, but has not endorsed one. In a recent interview, she said she supported education efforts to persuade teachers and community members to be vaccinated.

The L.A. district also goes further than state guidelines in requiring students to be masked outdoors while at school. At Tuesday’s school board meeting, officials touted such measures — that go beyond state and county requirements — as reasons for anxious parents to feel reassured about returning to campus for the upcoming school year, which begins Aug. 16.

For all of Los Angeles County, which has 80 school districts, education officials have estimated that about 83% of K-12 school district employees are vaccinated, according to data submitted to the county by most districts.

Both the University of California and the Cal State systems have announced strict vaccine mandates for all students and staff, who will be turned away from in-person classes and indoor campus facilities if they are not inoculated. Last week, the Los Angeles Community College established vaccine rules for staff and students in line with the K-12 policy: Show proof of vaccination or submit to regular coronavirus testing.

The expected Newsom announcement comes as several large California school districts have announced similar policies in recent days, including San Francisco Unified and Long Beach. San Francisco will require proof of vaccination for all faculty starting Sept. 7. Any employee not vaccinated would have to be tested at least weekly for coronavirus infection. The school district includes roughly 10,000 employees and has received vaccine verification for about half.

“Given that we are in the midst of rising cases and new variants in our community, a vaccine requirement is a necessary step to keeping our students, staff and families safe, ” Supt. Vincent Matthews said in a statement.

As case numbers linked to the Delta variant have grown, there’s been a substantial increase in infected children in California and across the U.S, according to data compiled by the the American Academy of Pediatrics. Severe illness among children appears to be rare.

Vaccine mandates for school employees received an endorsement on Tuesday from Dr. Anthony Fauci, the senior U.S. infectious-disease expert. Fauci said that state and local governments should require teachers to get vaccinated against COVID-19.

“Yeah, I’m going to upset some people on this, but I think we should,” he said in an interview with MSNBC. “This is very serious business. You would wish that people would see why it’s so important to get vaccinated.”

But Fauci added that said there wouldn’t be federal mandates for teacher vaccinations. Local mandates “for schools, for teachers, for universities, for colleges” would be appropriate, he said.