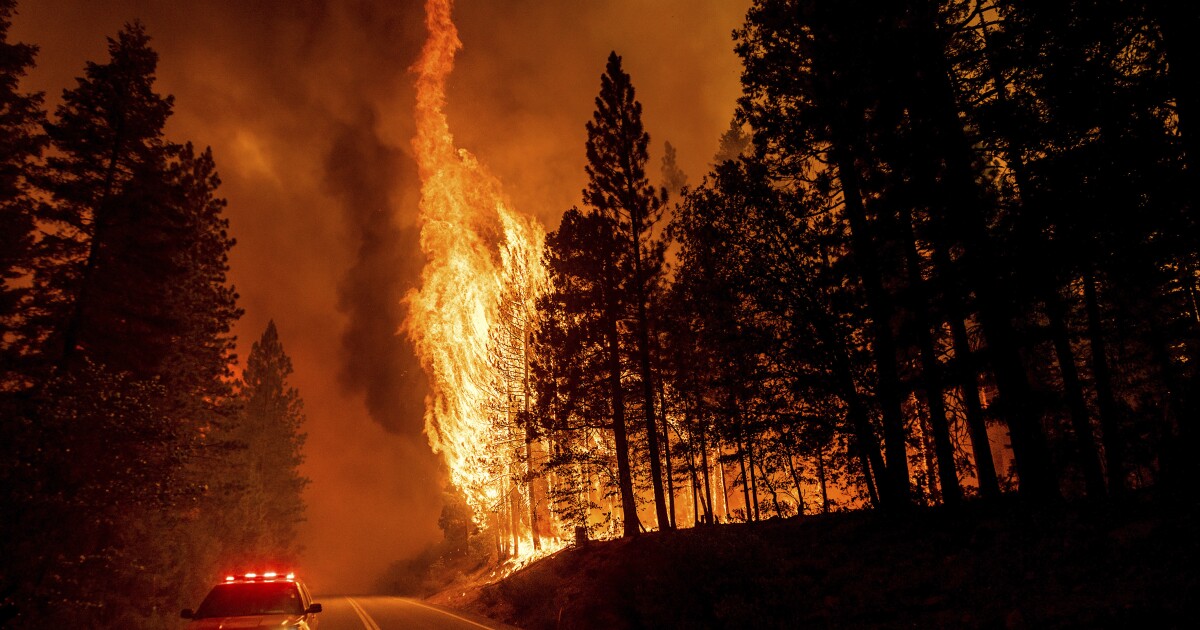 The fire, which has seared 487,764 acres across four counties north of Sacramento, is continuing to generate its own weather.

Around midnight Monday, an explosive storm cloud rose roughly 40,000 feet above the eastern portion of the blaze.

The pyrocumulonimbus cloud was so intense that it sparked lighting, as well as fiery spinning vortexes known as fire whirls, said Rich Thompson, a National Weather Service incident meteorologist for the Dixie fire.

One large whirl captured by an infrared camera shows a thin tendril snaking high above the rest of the flames. Thompson estimates that it soared 300 to 400 feet above an area west of Antelope Lake, where evacuations were ordered this week.

“It’s a sign to let people know that this fire still has a lot of potential,” Thompson said. “It’s actually something that was very impressive to watch.”

A fire whirl — sometimes likened to a tornado — is generated when hot air surges upward and begins to spin. As it spirals, it can collect ash, smoke and embers and form a tight, spinning vortex, like the one observed Monday night, Thompson said. The spinning action can “throw those embers across fire lines, so it can cause some really significant control issues,” he added.

The second largest blaze in California history, the Dixie fire has burned at least 893 homes and commercial buildings and threatens more than 16,000 others, according to the latest incident report.

Crews made progress on the blaze over the last several days, and containment has climbed to 25% — up from 21% Monday.

Many people are unable to return to their communities amid continued fire threats and evacuation orders.

“Many of our friends and neighbors have lost everything, and I know for those folks, the healing and recovery process will begin when they are able to see the damage that has been done to their property,” Johns said.

Authorities have issued evacuation orders for the Antelope Lake area and Janesville to the north, and firefighters are conducting proactive structure-protection operations in those areas, said Tim Jones, a California Department of Forestry and Fire Protection spokesperson.

Pacific Gas & Electric has said its equipment might have sparked the Dixie fire, which broke out July 13 near the utility’s power station in Feather River Canyon, as well as another fire that later merged with Dixie.

Just as firefighters are beginning to make headway on the blaze, conditions this week are expected to change for the worse.

Heavy smoke that had converged over the fire moderated temperatures and fire behavior, officials said; the cover gave crews time to make some progress fighting the fire. But the smoke began clearing out Monday, paving the way for temperatures to again soar and humidity levels to plunge.

The weather is part of the drought and heat, fueled by climate change, that have dried out the western U.S. and spurred rapid fire growth.

Temperatures in the fire area hovered in the 90s Tuesday and are expected to reach the 100s on Wednesday and Thursday. Humidity could drop into the low teens during the daytime this week, with potentially little to no recovery at night, forecasters said.

Also complicating firefighting efforts: Afternoon winds are expected, with southwest gusts up to 20 mph. And beginning Thursday, there’s a chance of isolated thunderstorms that bring the possibility of dry lighting and erratic winds.

“Firefighters are still very much on heightened alert,” Thompson said.

Much of the southern and southwestern portions of the fire are “buttoned up,” but there’s room for significant growth on the north and northeast, he said.

Some areas along the eastern edge of the fire are located in burn scar areas, which offer some natural protection because the vegetation there has been thinned out by previous fires, Thompson said.

Dixie is one of 96 blazes raging across the West, said Rocky Opliger, an incident commander for California Interagency Incident Team 4. More than 25,000 firefighters are deployed to fight the fires, with nearly 6,000 assigned to Dixie alone, he said.

To the west of the Dixie fire, the lightning-sparked Monument fire continues to spread, with little containment, in Trinity County. The blaze, which ignited July 30 near Monument Peak, had grown to nearly 58,000 acres and was 3% contained on Tuesday, according to the latest incident report.